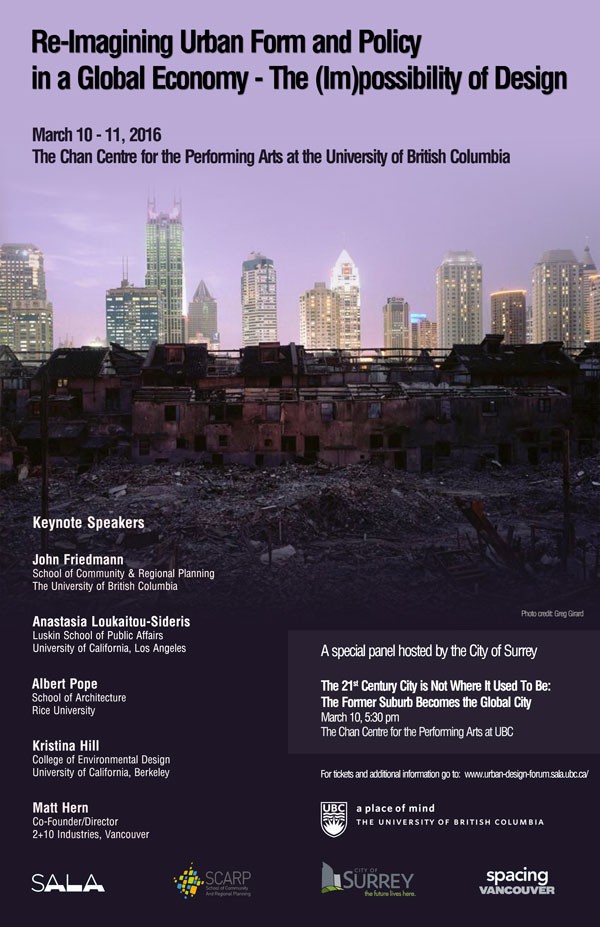 Exactly forty years ago, Vancouver hosted the first UN Habitat Conference. In 1976, cities were struggling to survive, global warming was only feared by a tiny few, and the global rural to urban migration had just begun. Now cities are “thriving” but with economic disparity more glaring than ever. Cities like Vancouver are magnets for unimaginable personal wealth, while cities like Surrey BC accommodate wave after wave of immigrants of vastly lesser means. What are we to make of these transformations? What role, if any, can urban design play?  Design, the very thing that made Vancouver so attractive as a place to invest, and, ironically, may have helped price Vancouver homes out of reach of average families.

We think there is still time to think, decide, and act. As such, the two-day SALA/SCARP Urban Design forum—Re-Imagining the city – The (im)possibility of Design—running March 10 and 11 at the Telus Theater of the Chan at the University of British Columbia, asks four related questions:

Key to the concerns is this. A new city is emerging unnoticed within the shell of the old. As the centre city chokes on its own wealth, the surrounding city assumes roles shed by the center – for jobs, for homes, for immigration,for real community,  and for citizenship.The partners in this forum, the City of Surrey, will host a free panel on this emerging reality  called The 21st Century City is Not Where it Used to Be: The Former Suburb Becomes the Global City. A panel of the regional leaders who have created the livable region and made the South of Fraser a true second centre – and the potential new centre of the region – will give their views on this dramatic shift. This promises to be a landmark event in how we think about urban regions, both in Canada and around the world.

****
For more information, visit the Re-Imagining the city – The (im)possibility of Design website.