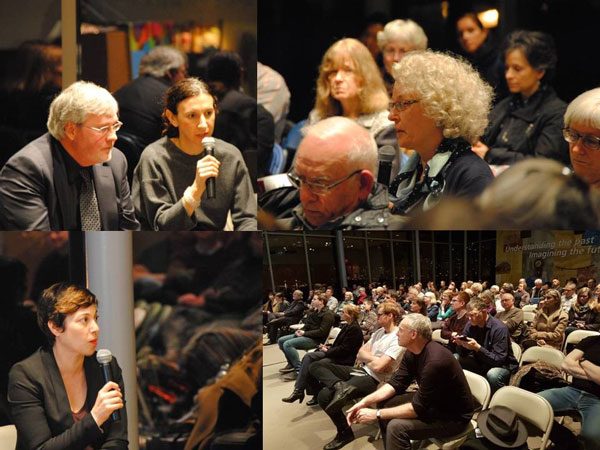 As the Thought Leader these past 3 years for the Royal Architectural Institute of Canada Metro Vancouver Network’s Built City Speaker Series, with my RAIC team I have brought forward important sustainable city building topics to the professional and public communities, engaging vibrant speakers that would resonate with issues in the public eye. These interactive dialogues – from seasoned panelists to affordable housing expert workshops to full-on charrettes with non-profit housing consultants and urban designers as table facilitators – have consistently sold out at the Museum of Vancouver, our originating venue partner. We have a new and exciting chapter in the Speaker Series starting in May as the RAIC Metro Vancouver Network looks to the City of North Vancouver to be our new co-visionary partner.

The Built City Speaker Series, now in its eighth year, is fortunate to be in a region where participatory planning has been a part of civic life since the 1970s, creating remarkable public urban design and planning literacy, amongst other municipal innovations. There appears to be a generational dividend in the City of Vancouver where there is now a public capacity and demand for walkability, low GHG emission and diverse sustainability mandates, mixed land uses, compact development, pedestrian-oriented urban design and housing affordability. The City of Vancouver has set the pace for livable, walkable, multi-modal community development in Metro Vancouver and has had a significant impact in this regionally competitive market.

So what do vibrant neighbourhoods, small businesses, and climate change have to do with each other? Small businesses are often called the backbone of the Canadian economy, but more than that, they provide local employment, are nimble and responsive to neighbourhood needs, including providing public spaces where residents can meet and build community. As climate change impacts advance, it becomes apparent that there will be more losers than winners. These public spaces will become increasingly important in building social resilience, enhancing the social fabric and strengthening civil society. A strong civil society and equity is not only important to maintaining the rule of law but fundamental in the process of creating citizen buy-in for climate change initiatives.

Part One of this important series, held January 31st at the Museum of Vancouver, “Triple Net Leases – Can Vibrant Communities Survive Them? Tax Analysis + Policy Reform” asked hard questions about the viability of small businesses and their neighbourhood impact.

The standard methodology for assessing property values across Canada has been to tax the “best and highest use” of the property under the Official Community Plan (OCP). This means that an existing 1950s one storey building with an OCP designation of 20 storeys, mixed-use will be taxed as if the 20 storeys were already built. In this example, the small business tenant in the one storey building will have to carry the maintenance, rent and the tax costs – hence the term triple net leases – but the taxes will be calculated on the “ghost” as if  new 20 storeys. As downtowns hollow out of their small businesses across North America, only the chain stores are able to afford these leases. Chains, with their genesis in shopping malls, aren’t equipped operationally to adapt to a pedestrian streetscape and often do not provide activated public spaces.

The panelists for the “Triple Net Leases – Can Vibrant Communities Survive Them? Tax Analysis + Policy Reform” each took a different slice of the problem that small businesses are facing and offered insight and some solutions.

David Nishi-Beckingham, BC Director, AEC Property Tax, had a “plain-English” overview of some technical tax concepts and policy recommendations. Municipalities have ongoing budget requirements with limited taxation tools. It will be a matter of shifting the tax burden to other property classes, as municipalities will need to continue to function and provide services.

Some temporary solutions that Nishi-Beckingham suggested are: Vancouver Land Averaging could be utilized, where the City can phase-in the increase over three years above a percentage increase in assessed value (not effective for huge value jumps; negotiate from Triple Net Lease to Semi-Net where there is a base year tax, with an agreed inflation factor which spreads the risk of tax increases but at the end of the lease, the business will have to move.

The longer term solutions, Nishi-Beckingham suggested would be: lower the commercial tax ratio to the Canadian average; move away from the phantom Highest and Best Use taxation methodology to Actual Use – the BC government did this for Major Industrial Properties – why not for Small Businesses? Other long term solutions include offering tax rebates for small businesses; lower the overall business class of property tax; incentivize full occupancy for commercial properties. “The real fixes will have to come from government … they will not change unless forced to.”

Marianne Amodio, Architect AIBC and principal of ma + hg architects, is the architect working on the restoration and renovation of the Hollywood Theatre, which will also include  new market rental housing on Broadway Avenue in the heart of Vancouver’s Kitsilano neighbourhood. At the Built City event in January, she outlined the complex opportunities for creating pedestrian-oriented, small-scale retail spaces through a density bonus, transferred from the Hollywood Theatre site to the property immediately adjacent to the west, also previously owned by the Hollywood Theatre owner.

Michelle Barile, the Executive Director of the West Broadway Business Improvement Area (BIA,) Vancouver, noted that small businesses provide many neighbourhoods with local amenities through the shops and services, a key ingredient to walkable, livable and low carbon communities. She also mentioned that over one million jobs are derived from small businesses in BC, accounting for 45% of the total employment in the province. Small, independent businesses make up 95% of all businesses in BC.

Karen and Jane Tennant, sisters/co-owners for the past 34 years of the Chocolate Mousse kitchen store on Robson Street, Vancouver, presented their experience of running a very successful small, local business and then seeing their taxes jump exponentially. The Chocolate Mousse was a viable small business that provided employment to many local people, with very loyal local and international customers in the West End. Sadly, it closed its doors in February of this year, and should be a flashpoint for the general public to sit up and take notice.

Part Two of the Built City series, to be held on May 29th, 2019 “The Best High Street Design-Future Proofing for Vibrancy + Technology,” will address future-proofing for changing technologies in the small business environment, including e-retail, autonomous vehicles and deliveries, plus an overheated property market. It requires streetscape design-savvy to create “outdoor public living rooms” that are loved and always busy, as well as progressive tax policies.

Find out what urban design ingredients make for the animated streetscapes that demonstrate city living at its best! Registration and bios: www.raic.org/metrovan

Looking at the macro picture, is it time for a new “Green Deal” and taxation regime for the evolving city-states that are taking on more leadership roles including climate change?