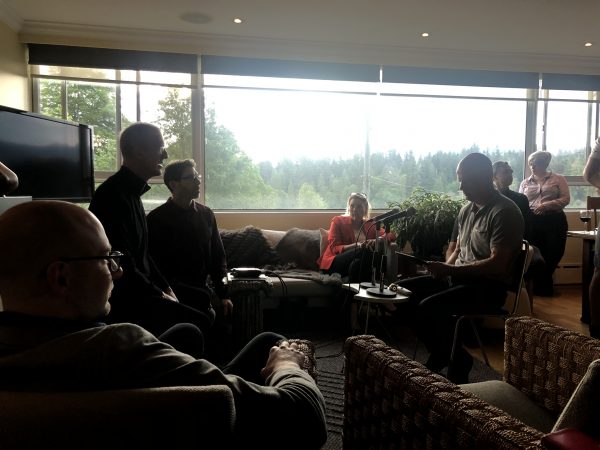 On a balmy Tuesday night I found myself walking towards Lost Lagoon along Alberni Street. I parked my car at a nearby parking garage, slightly frustrated that there were no EV stalls provided anywhere nearby. I’m heading to an intimate event, a Price Tags Soiree, hosted by former SFU The City Program Director and former City of Vancouver councillor, Gordon Price.

The small group of people for this evenings talk are coming to see a very special guest: Jeff Speck, author of Suburban Nation, Walkable City, and most recently, Walkable City Rules. Speck’s influence on my way of thinking about urban design and mobility has been profound,  and I’ve actively referred to my copy of Walkable City many times since it was written.

It was for this reason that I was nervous heading up the road. I paused to watch a group of people feed baby Canadian Geese, then slowly moved toward the building, passing a little boy speaking to two strangers out of his window who had been passing by. He was trying to give them Lego and asked them to wait right there while he grabbed more.

As I approached the entry, I saw a group congregated outside and checked the time, knowing I was still early. They were unloading their vehicle and I tentatively introduced myself to the people I didn’t know. Jeff Speck, holding a platter of vegetables, introduced himself, and my response was an almost too quick “I know!” Later, when he’d sign my copy of Walkable City, he’d write in it “You know who I am!”

We buzzed and made our way inside, and I had the chance to briefly meet and speak with our gracious host, Gordon Price. The setting was spectacular: an entry into a partially open kitchen from https://kitchendesignperth.com.au/ catalog, opposite an almost wall-to-wall window, looking out at the forests of Stanley Park. A hint of Lost Lagoon, and slivers of blue sky.

In front of these was an eclectic collection of chairs, arranged around two microphones and a recorder—clearly the interviewer/interviewee location for the Podcast portion of the evening. I began socializing with some of the guests, learning that Canada Lands—a company whose goal it is to redevelop previously Crown-owned land, into uses that meet current Canadian needs—was in large part the reason for Speck’s visit. He was there to speak on behalf of their Jericho Lands project. As more and more people began to filter into the apartment, I somehow managed to carve out a few minutes of discussion with Speck.

As a designer, I agree for the most part with his books and the planning errors he highlights within them. The length of my daily commute is a case in point. However, in reading his work I often find myself returning to the questions that plague me, not as a designer, but as a Millennial and young professional. When I was young and transit-based, my ability to be a warrior for walking, mobility, and living close to the city was easy. As I grow—as my family grows—that is no longer the case, and I’ve come to understand that many my age struggle with these issues. They delay starting families because of the high costs of living in walkable neighbourhoods.

Others, including myself, have had families and have been forced to the suburbs to afford the life we feel our kids deserve. It’s one thing to be a bachelor living in a studio apartment for $2200 a month, but entirely different to force that upon a 3-year-old. These were key items that I felt had been pushed aside in Speck’s narrative, and I was eager to ask him about them.

Permit me to further explain the gravity of the issue facing Millenial families and city living: the addition of the federal stress-test in Canada has drastically affected young people’s borrowing power. If you are unaware, the stress test was mandated by the federal government to ensure that arrears rates on mortgages lowered and that people did not take out mortgages past their available limit. It was created with the good intention of preventing individuals from receiving mortgages that they can’t afford. The test is run on a high-end limit of what the individual is capable of affording so that if interest rates increase, they will still be able to pay their mortgage.

There are many problems, however. For example, this limits where one can live as the down-payment required is at least 20%, and most Millenials don’t have that kind of money in the bank. While the test was created to prevent defaulting on loans, according to the Canadian Bankers Association (CBA), Canada had a nationwide arrears percentage of 0.28% in January of 2018. Even at the height of the financial crisis, Canada never slid past a 1% arrears rate. When you review these numbers it is hard to see why this was such a pressing issue, but the net effect is that if young professionals like myself want to raise a family or buy a home, we have to move to where we can afford…in the suburbs. Yet as suburbanites, Millenials are also targeted, having recently been threatened with paying a commuting tax, which in some scenarios would add up to $6500 a year in taxes ($8/day for some families), under the last published plan details.

Now, while this has been shown to work to cut down congestion—and everyone wants that, myself included—the reality is that it does so because those that can’t afford it either move (away or in a rare possibility into the city itself) or don’t commute either taking hours by transit, or simply leaving their job and working in the city closer to them. Within this context, Speck’s argument in support of congestion taxes, living in the cities that most young people can’t afford, and against electric vehicles—which young people would argue are an attempt to do some good—takes an elitist twist.

This was the rabbit hole I was descending with Speck prior to him sitting down and beginning his interview. I won’t recount the details of the interview here, as everyone can and should listen to it themselves. While it was an artful and fantastic view into the life and history of a man shaping the way we think about our built environment for the first half, the second half was more contentious as it revolved more on the future of transportation.

The talk wove its way through Speck’s history, writing, and where he sees us going in the future. Gordon Price was a masterful interviewer who neither shied away from a challenging subject nor let Speck off with a non-committal answer. All in the pursuit of getting to the heart of the conversation: walkability and the future health of our planet.

But throughout the discussion, I could not shake the conversations I’d had with my friends and their struggles, and how easy it all seemed to Speck and those surrounding us. He speaks with an air indicative of someone who doesn’t have to deal with the same issues many Millenials do, and seems disconnected and aloof regarding young people, even if his ultimate goal is protecting the planet for these future generations. I appeared to be the youngest person at the event, and while some individuals posed questions that challenged some of the thinking regarding the “Millenial Issue”, they were few and far between.

Near the end of the conversation, Speck began to discuss his doubts around the voracity of claims that autonomous driving is on the horizon (or if it is even possible at all) and scoffed at what he portrayed as the myriad of obstacles standing in the way of the autonomous vehicle and transport of the future, including electric vehicles. His sentiments are clearly laid out in his books, but more-so in person. Speck loathes the car, and by proxy, the car owner as well.

As the podcast came to a close, the larger takeaway for me was this: if we demonize the ways some individuals or groups need to operate in order to live, if we vilify the modes of transport that some people are effectively forced to use—no matter how well-meaning—so completely, so devastatingly, we risk losing a broad audience that is required to reach the overall goal of making better places for people to live. The wonderfully purist ideas laid out by Speck and others need to be made accessible to those of us coming up the ranks.

I approached Speck shortly after the interview to continue our discussion. Although he was clear that he was no lifestyle coach, he stated that everybody’s life goes through phases and that, currently, my family and I were meant to live in the suburbs. But eventually, if it was important to enough, I’d find a way to make it back to the city.

I appreciated the optimism, but unfortunately, this line of thinking did not ring true. Many people are leaving Metro Vancouver to more affordable cities. The “move and commute” ideology is not curbing the migration. The average millennial either spends too much of their income on an urban home to be sustainable, or spends too much of their income moving outside of the city and commuting. Simply put: we cannot all live in vibrant, urban neighbourhoods. There just aren’t enough to go around.

Perhaps this is beyond Speck. After all, livability is a multi-layered, complex problem with no single tool to do the job. But at the same time, no one lives in a vacuum. Yes, there is a high price to pay for the transportation choices we make and the roads we drive, but broader government policies play a large part in hindering the ability for young people of all stripes to move where they want or are financially able to. As such, people are forced to push aside their aspirations and dreams for those that put them in a better financial position.

As I walked away from the event, passing fountain after fountain behind gated walls, I felt the pang of regret and guilt that I had to drive home…and anger at the fact that I had been made to feel this way at all. On the other hand, I thought that the fact that this great talk was even happening was a huge positive. By hosting these events, creating discussions through his Podcast, the Price Tags newsletter and his blog, Gordon Price was inspiring many, and critical and open discussions were taking place. These are necessary for any headway to be made. If we blindly agree, or fail to disagree, we will stay stagnant.

I also thought about Jeff Speck and the challenges that lay ahead for my generation and those who are on our heels. Clearly, everything Speck is doing for our world and our environment is noble. And we certainly don’t have to see eye-to-eye on every detail to achieve our mutual goals of a better, cleaner world. However, if an entire generation is meant to arrest the development of their lives because individuals like Speck demonize the limited methods we have to do our part, the overall mission will inevitably be lost.

Jeremy Senko is happily lost in the world of theoretical architecture and design. He is forever a student at heart, consistently reading, experiencing and learning about the world he inhabits. More specifically, he is a Registered Interior Designer with a Bachelor of Interior Design from Kwantlen Polytechnic University, where he pushed the limits (and the patience) of his professors.