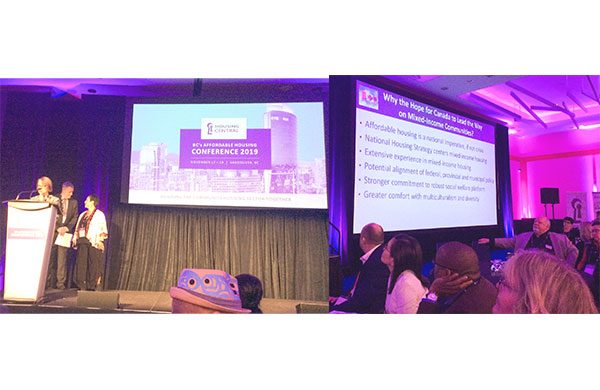 This year’s Housing Central Conference may have been the most comprehensive, versatile and multifaceted to date. From Sunday, Nov 17. to Tuesday, Nov. 19, over 1,600 delegates had the opportunity to participate at over 120 education sessions and engage with 50+ trade show exhibitors about inclusive, safe and affordable housing. The conference was organized by the BC Non-Profit Housing Association in partnership with Co-operative Housing Federation of BC and Aboriginal Housing Management Association.

Here is an overview of some of the themes that were addressed during the highly informative sessions and keynote speeches:

Social and Racial Inclusion
The conference opened on Sunday with Dr. Mark Joseph’s powerful presentation about National Initiative on Mixed-Income Communities‘ research findings. It highlighted the importance of inclusivity and the impact housing has to diminish social and racial imbalances in our society. 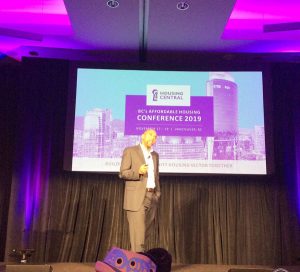 “We all inevitably have prejudices against those who are not like ‘us’ and mixed-income communities can help see ‘the other’ in a different light,” he explained. Canada’s National Housing Strategy sets a hopeful parameter that can lead the way for mixed-income communities. “How do we create a culture of belonging?” Joseph asked, which continued like a topical theme throughout the Housing Central Conference.

Senator Murray Sinclair’s speech connected to Joseph’s question of belonging. In his keynote speech on Monday, Senator Sinclair displayed the difficult relationship between Canada’s indigenous people and the Government that is riddled with hundreds of years of abuse and broken promises. Home is about belonging. He concluded that our educational system should teach our children where they come from, their heritage and origins in a way that makes them feel they are valid and that they belong here.

Inclusivity was also reflected in the eloquent speech of Doug Tennant, CEO of UNITI, an umbrella of three organizations that build inclusive and healthy communities in Surrey. Tennant emphasized that in our society people with disabilities have the right to choose where and how to live, just like anybody else. “More people with disabilities need to be hosts at the table,” he said, highlighting the importance of independence for people with disabilities and their sense of belonging in our society that is increasingly becoming inclusive. His speech also signalled the recognition that affordable housing is no longer an issue affecting only major metropolis, but also the suburbs.

In order to be truly inclusive, collaboration and building partnerships is essential to successfully providing housing. This was also addressed at the session Data and Demand for Inclusive Housing held by BCNPHA and Community Living BC.

Compassion and Empathy
What do compassion and empathy have to do with affordable housing? A lot, as it turns out! The stigma and negative connotations that are attached to affordable housing and the people who live in affordable housing is not news. This pertains especially to housing provided to members in our society who require the highest form of assistance within the housing continuum. This is why a lot of housing non-profits face NIMBY attitudes in neighbourhoods with an affluent or even middle-income demographics.

With this in mind, Dr. Brian Goldman‘s compelling keynote speech focused on the power of kindness, empathy and compassion. “Empathy is the capacity to understand what the other person is going through. Compassion is taking action about it,” he explained. People who work in the non-profit sector—especially those dealing with clients who face hardships such as homelessness, substance abuse or mental health problems—are exposed to stressors that can potentially diminish their ability to have empathy. More specifically, Goldman mentioned various examples of stressors within the health care system that can lead to compassion fatigue, such as:

Sunday’s session, Proven Strategies for Developing Affordable Housing, addressed the issue of NIMBY and, more specifically, how non-profits can strategically develop projects that diminish prejudices that lead to NIMBY attitudes. In her presentation, 7 Pillars of Success, Carla Guerrera—CEO of Purpose Driven Development—explained the seven steps necessary for non-profits to successfully plan, implement and execute an affordable housing project:

These steps will also help to simplify the complexity of NIMBYism. James Forsyth from BC Housing added to this session, advising to have clarity for one’s project. At the same time Forsyth emphasized it is important to be open to change as the project moves along, since “projects never have a clear path.”

Financial Sustainability
Financial sustainability and a clear succession plan are inevitable, regardless of whether you are running a small, medium or large business—a non-profit or otherwise. The fact is, non-profits often have to balance their idealistic mission and visions, with the reality of financial challenges. Guest speaker Derek Ballantyne, CEO of Encasa Financial Inc and Board member at Canada Mortgage and Housing Corporation addressed the 1600+ delegates in the room, saying they come from a place of privilege in regards to housing as he referred to the “advanced housing situation in BC” that is exceptional in Canada.

The BC government’s position as the leader in affordable housing developments takes on heightened importance in the funding of new, sustainable and innovative affordable housing developments. And the demand is high: according to Statistics Canada’s 2016 census, 14.9% of households are considered in core housing need in BC. The 2019 BC Budget took some major new steps towards housing affordability, such as BC Housing’s First-Time Buyer Incentive and the increased budget to house those who are homeless, low-income renters and who live in core housing need.

On the federal level, a lot has changed since the launch of the Government’s National Housing Strategy in 2017 —a 10-year, $55+ billion plan that aims to help build 125,000 new affordable housing units, repair 300,000 others and reduce chronic homelessness by 50 percent. This is the first significant direct involvement by the federal government since 1993 to contribute directly to affordable housing initiatives across the country.

Subsequently, the Canada Mortgage and Housing Corporation, as a Crown Corporation (CMHC) of the Government of Canada has regained prominence in the realm of the development and funding of affordable housing on a national level.

CMHC’s highly informative session CMHC Funding Projects, Partnerships, Land Initiatives highlighted the importance of partnerships not only on the governmental level, but also partnerships between government and the private sector.

Robyn Adamache and Andrew Middleton presented CMHC’s many funding opportunities under the New Construction Stream and Preservation Stream for existing community housing providers. One successful case study that was funded under the New Construction Stream is Covenant House on Seymour Street in Vancouver. Another one is a low-income project in Vancouver’s neighbourhood of Mount Pleasant developed by Catalyst Community Development in partnership with the City of Vancouver and Vancouver Affordable Housing Agency (VAHA).

It was refreshing to see in the CMHC’s presentation speaking to the fact that housing co-ops, non-profits as well as Indigenous groups are eligible to receive the highest amount (40%) of contribution under the New Construction Stream.

CMHC’s highly competitive Rental Construction Financing Initiative is a very popular one amongst non-profits as reflected in the numbers. The program has $13.75 Billion in funding and is the longest-running program in the National Housing Strategy. It’s so successful that CMHC received another $10 million for it. Another funding stream for affordable housing non-profits to explore is the Federal Lands Initiative.

The session was complemented by a case study by Lindsay Monk from the Victoria-based non-profit M’akola Development Services showcasing the impact of partnerships and the funding programs on an affordable housing project’s bottom line.

Overall, Housing Central 2019 was a very versatile and comprehensive three-day conference that thematized housing as a pivotal subject that pertains not just for the very wealthy or very poor, but all citizens in its full complexity. The keynote speeches, the sessions and interactive events in between the sessions encouraged the delegates to think about housing and the multitude of aspects that come with the subject.

We still have a long way to go in terms of making affordable, quality housing for everybody. We are, however,  getting closer to this goal by educating ourselves, sharing our stories and engaging in honest and informative conversations.

Everything is important. Everyone is important. We have to be prepared to share that pivotal space of compassion and understanding in our own personal, small microcosms.

For more information about the Housing Central Conference 2019, visit the website.

You can read our coverage Housing Central Conference 2018 here.