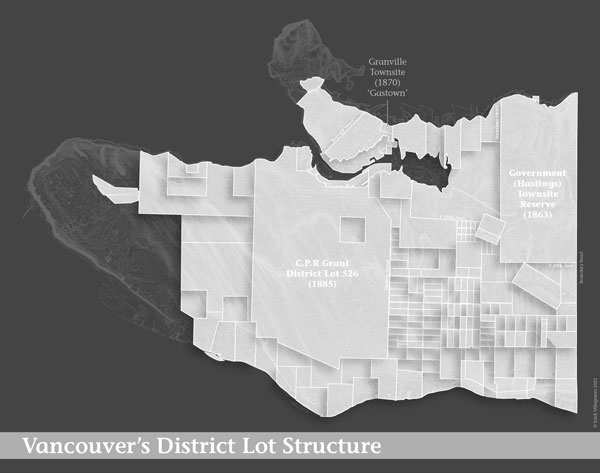 Any aspiring urban historian or property owner looking to renovate will quickly encounter the confusing smattering of numbers and words that make up a property’s legal description. Much more elaborate than your standard street address, the description typically includes the address, lot number, block number, plan number, district lot, and PID number.

In North America, legal descriptions provide a unique identifier of a specific parcel of land that has been legally surveyed. Within the context of cities and suburbs, this is typically recorded by plat (lots and blocks). As such, they are important to real estate record-keeping as it relates to the colonial system that brought forth this method of measuring and commodifying the landscape.

Among the numbers and terms within the legal description, the District Lot has a place of particular importance locally, insofar that their organizational structure and form have had an incredibly strong impact on the built form, use, and evolution of Vancouver’s built landscape.

The establishment of District Lots, as well as Townsites and Military Reserves, were among the earliest moves made by the Royal Engineers when they descended on the Lower Mainland in the late 1850s. These subdivided the land into a tapestry of abstract geometric puzzle pieces and ultimately opened up the land to entrepreneurial speculation.

“The surveyors would name, the settlers would claim and the Crown would grant. The colonial process known as pre-emption was implemented, allowing qualified male settlers to stake a claim. Pre-emption frenzy follower.”

This spurred a frantic pace of claiming, selling, subdividing, reselling, and development in Vancouver by a variety of different property owners—big and small. Berelowitz continues:

“But all followed the orientation and basic pattern of rectilinear gridded streets ordained by the Royal Engineers when they established the boundaries of those first District Lots. More than a hundred years later, seemingly random, unexplainable shifts or subtle changes in the street-grid system are in fact the direct result of these earliest District Lot boundaries. The ghost of pre-emption remain.”

The map depicted here explicitly shows Berelowitz’s ‘ghost’ pattern of District Lots and sets it against the existing topography of the city shown in light white lines. In doing so, the large degree of abstraction is blatantly clear. This was an indifferent and militaristic undertaking—embossing a 2-dimensional pattern based on efficiency with little concern for the geographic realities of a complex, ecologically rich 3-dimensional environment. The map also includes some key reference streets for orientation.

This representation deserves unpacking at a number of levels and will serve as a solid foundation for future pieces that will attempt to do so…as well as past maps that only implied the existence of this system. In the meantime, I will remain relatively high-level in its analysis.

At a broader social level, the map depicts the conceptual structure that underpins our economy based on the buying and selling of discrete, individual units of land—a cultural value system and world view, as we know, imported from Europe that is as strong today as it ever was. Such a system requires a simple method of division with easily measurable geometries. Square and rectangular geometries fit the bill, but as you can see, conflict with the land contours and its underlying processes, such as water drainage and geology.

Particularly visible on the graphic are D.L. 526 and Hastings Townsite Reserve, the largest areas on the image. The histories of each interesting in and of itself, but it’s worth noting that C.P.R.’s lot is home to several of the wealthiest neighbourhoods in Vancouver, including First Shaughnessy. With control of such a large area, the C.P.R. could and did comprehensively plan large neighbourhoods that would attract rich clientele.

This lies in contrast to the density of small District Lots east of Ontario St.—nestled between D.L. 526 and the Hastings Townsite Reserve. This varied pattern reflects the high number of small-scale developers that purchased, surveyed and subdivided their areas independently. That is, there was no cohesive plan across these District Lots. As a result, the area has a particularly high diversity of street patterns. Walking through the area, one will quickly encounter an assortment of misaligned and quirky streets.

As described by Berelowitz, the effect of this larger District Lot pattern is also experienced on-the-ground in significant ways—including staggered streets to curved ‘diversions’. But beyond the latter, the pattern contributes to local traffic patterns. Given that only a few streets span the city uninterrupted, these handful of streets become the focus of cross-city car traffic. This also relates to the well-known ‘rat maze’ reputation of the neighbourhoods between these high-traffic corridors—something that serves as an informal traffic calming measure for residential areas.

Well-known historian John Stilgoe once said that outside lies magic, arguing that growing the awareness of the everyday environment enriches one’s daily life. Locally, an understanding of District Lots opens up a whole new world of appreciation of Vancouver’s structure and history.  Whenever you encounter a street stagger or cruise along one of Vancouver’s many curved street connectors, you can reflect on being one of the earliest lines inscribed on the local landscape by European settlers.

A couple of great resources for those who want to learn more about Vancouver’s evolution and physical armature are Lance Berelowitz’s Dream City: Vancouver and the Global Imagination and Bruce Macdonald’s Vancouver: A Visual History.

Erick Villagomez is the Editor-in-Chief at Spacing Vancouver and the author of The Laws of Settlements: 54 Laws Underlying Settlements across Scale and Culture. He is also an educator, independent researcher, and designer with personal and professional interests in urban landscapes. His private practice–Metis Design|Build–is an innovative practice dedicated to a collaborative and ecologically responsible approach to the design and construction of places. He also teaches architectural drawing, rendering and visualization…and is an avid drawer and painter. You can see more of his artwork on his Visual Thoughts Tumblr and follow him on his instagram account: @e_vill1.