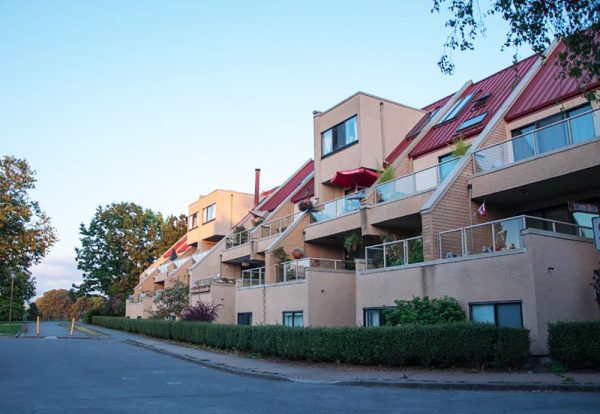 Co-op housing units in False Creek South. The city is taking more control over a housing form that was always intended to be independent. Photo: False Creek Housing Co-operative.

It’s surprising how relatively minor issues, such as a citywide street parking fee of $45 a year attracts so much press attention while the potential elimination of thousands of affordable Vancouver housing units during an out-of-control housing crisis slips mostly under the radar.

That is what was at stake on July 8 when Vancouver council considered a long-anticipated motion to establish a “methodology” for renewing leases of co-ops on city land. The motion put forward could be most simply understood as a takeover, for better or worse, of previously largely independently owned co-ops — co-ops unlucky enough to be located on leased city land versus land owned outright.

Well, the vote — with some key amendments — happened. And there is good news and bad news.

First the good news. The council voted unanimously to reduce the benchmark for income used to determine new charges from “median household income” to “median renter household income.” This may seem a detail but the difference is between $75,000 and $50,000. A big difference. Particularly because the Vancouver families that need help most are households at the $50,000 income level and below, not the $80,000 targeted for assistance by most other “affordable” housing programs in Vancouver. This change offered by Coun. Pete Fry passed unanimously.

Next was a change offered in an amendment by Coun. Jean Swanson. She asked housing co-ops to raise the minimum number of low-income units co-op developments would be required to include (technically “rent geared to income,” or RGI units) from 15 percent to 30 percent. This change concedes that to reach this target, new lease payments made to the city by co-ops may be reduced as a result.

More good news were amendments to the motion signaling the unanimous support of council for the very idea of housing co-ops, and the hope expressed that the city can somehow promote many more co-ops in the future, although no targets or mechanisms to achieve this end were advanced.

Now for the bad. An amendment offered by Swanson aimed specifically at protecting False Creek South from redevelopment, likely for towers, was defeated. And members of False Creek South co-ops will presumably not be invited to the table when the redevelopment of their buildings is considered. This one lost seven to four.

Finally, what might be the most unfortunate aspect of this now-adopted city “methodology” is an aspect that got virtually no attention during the debate. The motion, though perhaps much improved by council deliberations, still amounts to a city takeover of a housing form that was always intended to be independent.

Co-ops were first initiated as a way for a collective of like-minded people to acquire secure and collective “non-equity” ownership of their homes, beyond the reach of both market or government disturbance. These pioneers sacrificed the enormous equity gains now enjoyed by their age and professional cohorts in other parts of the city in favour of gaining affordability in the present and then paying it forward to the younger generation when they were gone. Now with the city so heavily involved in micro-managing a formerly independent collective, this element is largely lost.

Furthermore, while the change in RGI and median income levels are a huge relief, the mechanism of tying co-op rents to market rates still underlies the new city methodology. For example, tying rent targets to median renter income helps a lot; but as city rents continue their inexorable climb, so too does the median income of city renter families. Renter families who don’t make enough for these crazy rents have to move out of the city, skewing the median renter family income of those who remain up and up. Thus average renter income statistics are still tied to the out-of-control housing market.

If we truly want to protect our crucial frontline service workers from exile, we are not well served by a metric tied to the very problem we are trying to solve, are we?

If nothing else this whole exercise has shed light on just how insidious the impact of market forces on our housing conundrum is. May we all ponder its lessons and, as council suggests, find ways to increase the proportionate share of housing co-ops in our city. Hopefully these new co-ops can thrive under a lighter touch than this city “methodology” imposes.

Patrick Condon is the James Taylor chair in Landscape and Livable Environments at the University of British Columbia’s School of Architecture and Landscape Architecture and the founding chair of the UBC urban design program. He also writes regularly for The Tyee where this story originally appeared on July 13, 2021.