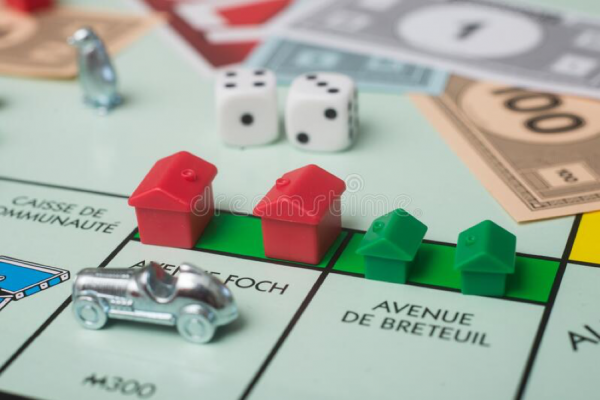 Zoning regulation in Vancouver is like playing Monopoly. We can purchase the little green pieces (which represents a monopoly on socially unproductive single-family zoning) or larger red pieces (representing a monopoly on rezoning). We need to rethink the housing spectrum by adding orange and yellow pieces that represent missing middle potential.

We would have already done this if CityPlan had not been suspended (Kensington Cedar Cottage was a terrific start).   We would have also completed our work on “the hearts” (local urban mini-frameworks) as we were well into implementation under the Neighborhood Centers Program. Again, the politically motivated suspension of this program was unfortunate.

The diagrams below of Renfrew Heights—co-designed with members of the community—reflected local urban design aspirations while identifying strategic sites for greater housing intensification and tailored amenity. There are 122 of these locations throughout the city as presented in yesterday’s Part 3. 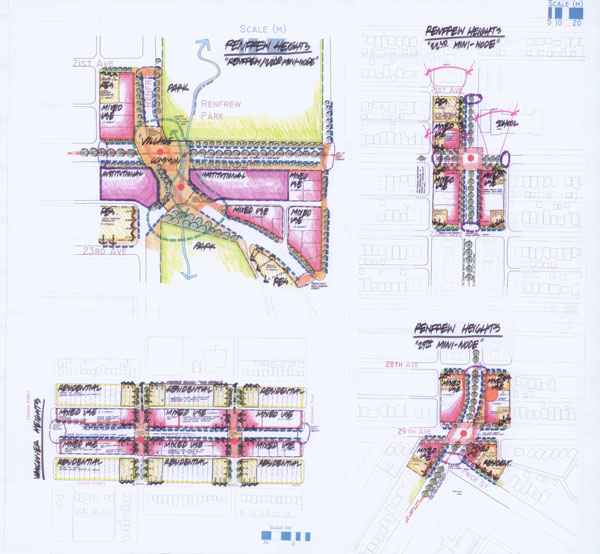 Had this important work continued, I believe we would have controlled land costs towards greater affordability, and provided certainty to the market and neighborhoods. Continued implementation, that produced locally tailored zoning, would have strengthened our neighborhoods by delivering a variety of affordable housing options.  Elected officials, who turned their backs on the neighborhoods, ultimately paid the price as they were not elected.

I will assume, for the purposes of this essay, that it may be too late to return to such productive work that has the side benefit of building community capacities.  Perhaps the best we can do is implement more thoughtful zoning tailored by land-use and context as presented below.  Interpretation of how to locally implement the proposed zoning in a way that reinforces neighborhood identity will require staff assignment by neighborhood.

The “zoning refresh strategy” also reduces and simplifies current residential zoning, while introducing expanded allowances (floor area and height) that are specifically tied to social outcomes. In other words, the “earning” would be entirely about site-by-site affordable housing contributions with a strong emphasis on non-market delivery.

To economically achieve this, the strategy introduces a combination of downzoning (lowered floor area allowances than we have today) in single-family areas (smaller McMansions still allowed) while concurrently increasing floor area for social purposes.  All existing housing would remain legally compliant while retaining assessed values.

The Province would need to ensure that assessments continue to reflect current use, not increased allowances available under new zoning which have driven out the mom and pops from local shopping streets.

The strategy also considers land assembly to modestly expand corner lots that can produce more housing because they face a flanking street.  Mid-block sites would remain intact to ensure character.  Contemporary buildings are welcomed in most areas, while more contextual sensitivity is recommended in the older townhouse neighbourhoods which become the lowest density areas in the city.

The intention is to give everyone something.  No particular shareholder gets everything they want.  This strategy substantially “dials up” floor area in the single-family ‘hoods while retaining 3 1/2 story scale.  The older neighborhoods remain intact with a small density increase to help with the retention/expansion of older homes.

Local shopping streets are allowed more density and height to accommodate greater patronage towards their survival. The arterial “segments” between the more intimate local shopping areas are also densified with the potential for larger floor plates.

Current apartment zoning is increased to ensure no displacement of existing affordable housing.  A new mixed industrial-residential zone is offered to introduce 24/7 vibrancy into jobs-oriented neighborhoods in a way that would not increase industrial land value.

All zones would deliver varying forms of housing and affordable tenure with an overarching emphasis on no land assembly, no residential underground parking, smaller and more incremental re-development forms, reduction or elimination of non-value-added soft costs, and incentive for market innovation, especially mass timber.

The strategy imagines a substantial density increase in all of the outer neighborhoods while remaining below the prevailing tree heights.  The intention is to visually minimize density by utilizing more intensive, efficient, and socially productive lower buildings across the board.

Let’s imagine converting to a more “ambient” approach under more intelligent zoning in stark contrast to re-zonings that are visually jarring while offering little social benefit. This strategy will also save political lives while building a legacy of resiliency.

The current Vancouver Zoning Map  has 70 zoning districts with residential entitlements (RS has 9, RT has 17, RM has 31, C has 13). Let’s overhaul towards greater clarity, simplicity, predictability and ease of approvals/construction. We could reduce this down to 6 generic zones as follows:

I further explain the generic new zones with their respective descriptions, intent statements and technical highlights below. The suggested density entitlements are based on advice from those active in land economics research, and not-for-profit development. Further massing/form scenario testing is required to possibly refine fsr capacities, but I’m confident of the numbers (some are aggressive to be sure) and contextual fit (don’t forget about the alternative of much taller point towers and 5-6 storey apartment forms being implemented under a for-profit re-zoning system).

My interest in being somewhat specific is to technically demonstrate how a shift from existing zoning, towards more productive social outcomes, might begin to look.  Given that we will be getting into the technical weeds, here are a few key acronyms and what they mean (also see “Your Forgot About Me! – Part 1):

Description: Recognizes the civic value of intact, ambient character areas of older housing that have been contextually reinforced over several decades from rigorous approval management stemming from thoughtful public engagement. These areas include, but are not limited to Strathcona, Mt. Pleasant, and parts of Kitsilano.  Additional .025 FSR is provided to strengthen retention and rehabilitation viability, while also incrementally introducing new housing choices, especially on lanes. This zone becomes the lowest density zone in the city at 1.0 FSR while continuing to introduce family-oriented housing opportunities near parks and schools.  Some existing RS areas with intact character may need to be changed to this zoning.

Intent Statement: The purpose of RC Residential Character is to strengthen (not mimic or replicate) prevailing context in a way that reinforces scale (through managing frontage), form, materiality, and front yard public realm while also increasing housing capacity, so that older neighborhoods with more consistent overall character remain visually, and experientially, intact. 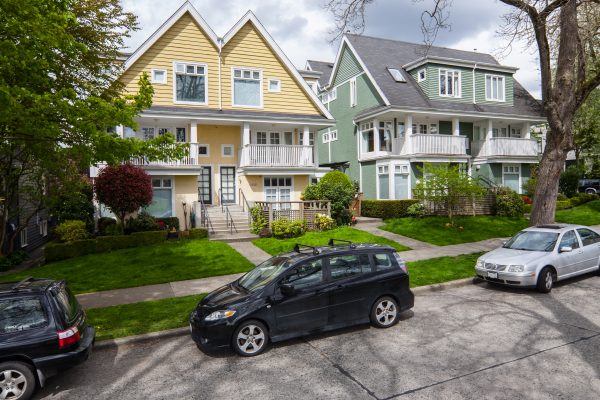 Parking is allowed on site but counted in FSR to discourage this practice in favor of revenue generating housing tenure. Contemporary form and expression is encouraged. Retention, integration and/or relocation if necessary, of existing character houses, is also encouraged to free up related development footprint.

Intent Statement: The purpose of RH Residential Housing is to immediately and significantly increase city-wide housing capacity with an emphasis on below-market affordable housing, in a way that does not compel land assembly while introducing new, innovative housing forms, so that low-density neighborhoods transition to more intensive, urban communities that offer multiple housing/tenure options for purchase or rent. 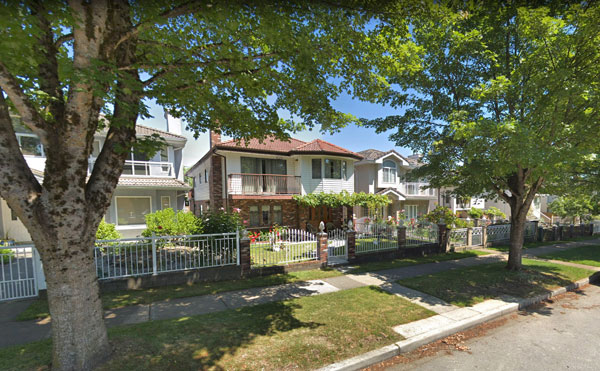 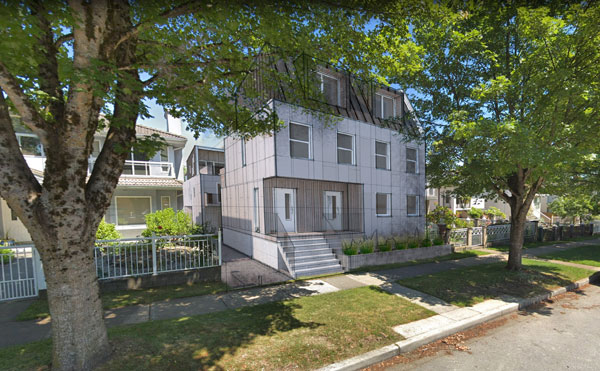 Description: This zone builds on the “heaving lifting” that Residential Multi-Family RM-4 (apartment zoning) has contributed to rental housing capacity by doubling FSR entitlements with modest land assembly. Housing agreements would ensure current renters would not be displaced and would be fairly treated in the new rent structure. No underground parking allowed. Some at-grade parking accessed from the lane would be allowed and excluded from FSR.  A variety of housing form is anticipated towards a contextual character similar to the West End but with shorter, smaller buildings.

Intent Statement: The purpose of RMH Residential More Housing is to expand capacities in existing multi-family areas without displacement, in a way that introduces greater affordability from modest land assembly and no parking requirements, so that housing capacities near the inner city are substantively increased. 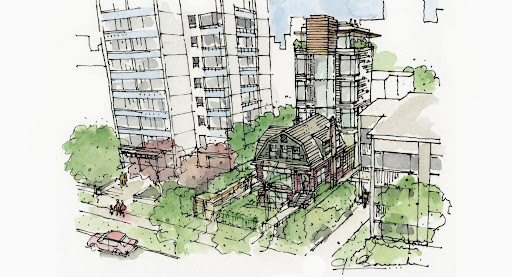 Description: This zone is focused on retaining the scale and character of local shopping areas on major and minor arterials. No land assembly is allowed to preserve existing smaller frontage ownerships that enhance the pedestrian experience, visual complexity, and vibrancy. No residential underground parking is allowed recognizing commercial parking at the lane, or on the ground floor, is necessary for CRU viability.

This zone is intended to motivate new mixed-use forms on small sites at high densities. The inclusion of some housing affordability is important but not at the expense of project economics. This is in support of locally serving commercial and office tenancy, and recognizes that such new mixed-use forms may/will have smaller, less efficient, floor plates with some areas required for corridors, elevators and stairs. 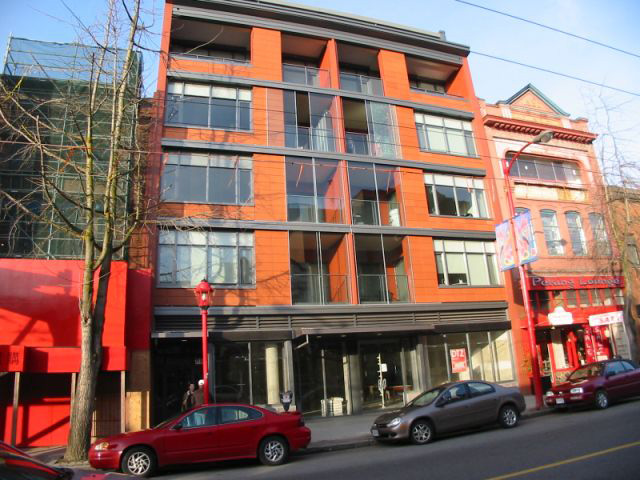 Description: This zone allows for more intensive, larger site development on major arterial blocks outside of recognized local shopping areas. Larger floorplate tenancy, including compatible production/distribution/repair activities, may be allowed with an emphasis on visually engaging ground floor spaces/volumes.   Land assembly up to 200’ frontage is allowed.

Intent Statement: The purpose of CCR Citywide Commercial/Housing is to aggressively deliver non-market housing, and citywide services, in a way that increases the development capacity of arterials, so that large developments that rely on assembled land are located away from local shopping. 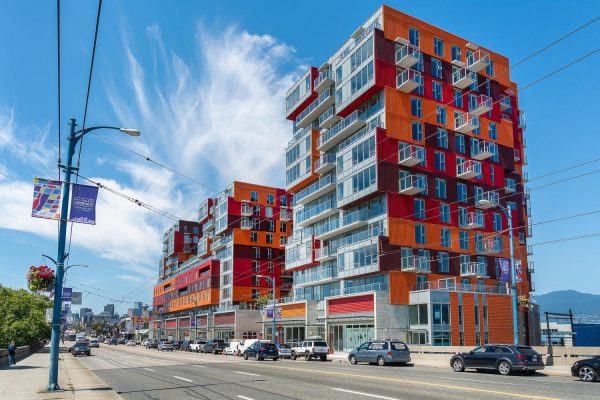 Description: This zone rewards overbuilding of industrial capacity with market residential rental potential towards more vibrant, safe “working neighborhoods” 24/7/365 days a year. Compatible light industrial and/or commercial tenancy, including some production, distribution and repair activities, are allowed at grade and within intermediate floors while ensuring health and safety for upper residential tenancy.

Intent Statement: The purpose of IR Industrial Residential is to increase tailored, and/or speculative, industrial capacity near the inner city in exchange for ancillary market rental tenure so that compatible non-residential activities are ensured by retaining industrial land value while also introducing a more active, safe pedestrian environment for workers and residents. 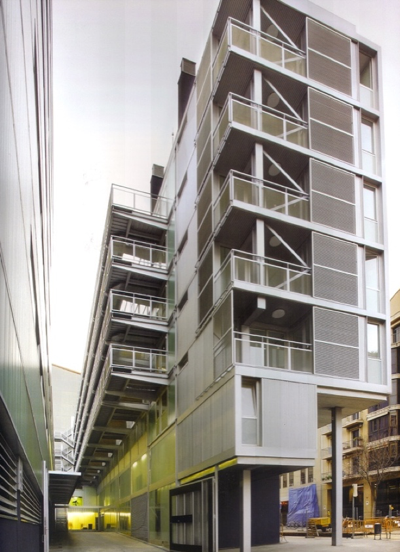 These simplified zones will facilitate the delivery of secured non-market housing that is better, bigger, faster, and cheaper….and enabled through codified “discretionary earning” under zoning. The approval machinery at City Hall would be re-deployed (much less emphasis on big re-zoning approvals) to facilitate smaller, quick approvals that more productively respond to our shared housing crises while strengthening local neighborhoods towards resilience.

Tomorrow’s final Part 5 will remind us about how to share.