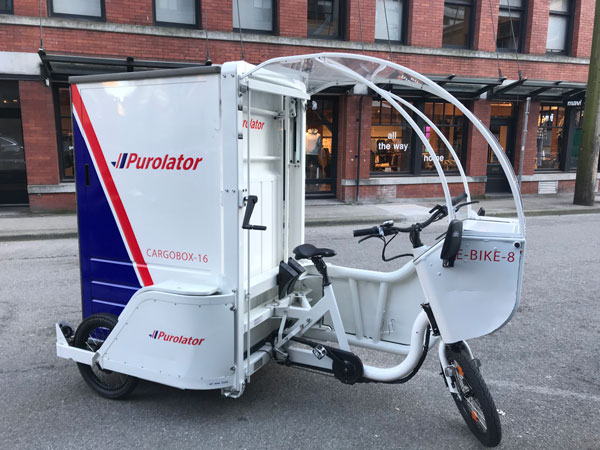 “What’s that!?” I interrupted our meeting mid-sentence to point down the street. My colleague turned to look out the window, but it was gone. A week later, I saw it again from the window of our 5th-floor office and attempted to capture a photo, but was met with poor results.

It was a month before I saw it again up close and was able to take a clear photo of the new Purolator box cargo bike.

Cargo tricycles like the one pictured above have been peddling around Vancouver since 2011. Shift Cargo Coop was the first to hit the streets and has been successful in providing zero-emission last-mile deliveries for several local companies. The Purolator bikes are not a new concept (they launched in Toronto and Montreal in 2021), but they represent a significant shift in the local last-mile delivery landscape. It is exciting because although images of cargo trikes and bikes are common content for urbanist Twitter, examples are almost always from Scandinavia or Japan and appear out of reach. To see these in Vancouver, let alone North America, is exciting.

The presence of a Purolator cargo bike is inherently interesting, but the supporting logistics network and infrastructure that support it are even more fascinating for their side effects on the urban fabric.

Logistics companies like Purolator have vast networks of warehouses, sorting facilities, truck planes, and hangers worldwide. Integrating a cargo bike into the mix signals an intentional shift in approach to last mile delivery. Urban environments are growing denser and more congested. At the same time, our collective interest in online shopping has skyrocketed during the pandemic and is unlikely ever to look the same. The convenience of ordering any product you can think of to your front door, sometimes arriving on the same day, cannot be denied. However, this creates a logistical issue. More packages need to go to more places, more often, and they need to arrive there faster.

One of the solutions is to tweak the logistics model for the last mile of delivery. In this case, the public-facing cargo bike is supported by a network of smaller distribution hubs hidden throughout the city. The cargo bike is therefore not doing laps between Downtown Vancouver and large logistics warehouses in Richmond, Surrey or Delta. It needs to get smaller loads more often, managed on a local level. In other cities, these manifest as “dark stores,” retail spaces which are used to support these local distribution hubs with no public access or frontage.

As e-commerce grows, so will the need for logistics space, possibly in the form of dark stores. We already know that local retailers are struggling in the face of e-commerce demand. Those able to change and move a portion of their business online have been most successful. Some are even converting floor space to logistics use to support online potions of their business or converting entirely. Those who do not embrace the increasingly online nature of retail will continue to struggle.

In this increasingly digital environment, what will the effect on our most vibrant streets be? Will Main Street transition to a series of entirely dark stores designed to support cargo bikes bringing goods to our homes that we ordered that morning instead of lively storefronts? Likely not, but the cargo bike is a signal that we need to remember to support our local shops and for retailers to see the package-laden wheels of change.

Andrew Cuthbert is a community planner who works on land use plans, zoning bylaws, and active transportation plans all over British Columbia. He loves helping communities solve problems. When not working, Andrew can most likely be found on his bike taking in the sights and fresh air.