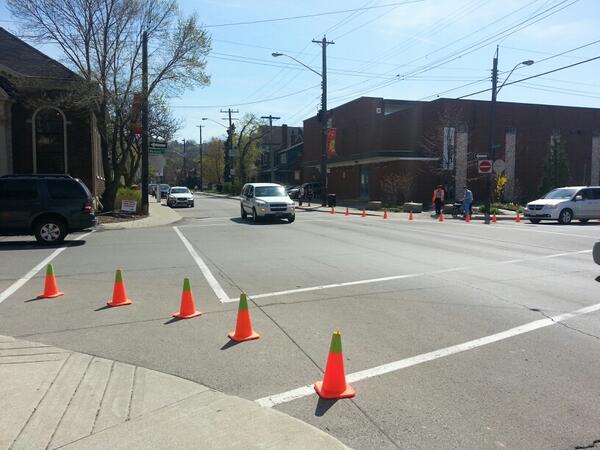 We at Spacing read Raise the Hammer, a website that covers urban issues in Hamilton. This guest post is by Raise the Hammer‘s editor, Ryan McGreal, on his city’s recent attempt at engaging in Tactical Urbanism, and the City of Hamilton’s subsequent response.

Last week, the City of Hamilton hosted a talk on tactical urbanism by Mike Lydon, a principal at New York’s Street Plans Collaborative. It’s the principle that citizens can undertake direct, low-cost, high-reward actions that immediately improve some aspect of a community’s public life and demonstrate to city leaders that there are opportunities for easy, successful changes to the status quo.

The purpose of tactical urbanism is to cut through the “analysis paralysis” that often grips municipal governments. Instead of spending years studying and planning without actually doing anything, tactical urbanism emphasizes short-term action that precipitates long-term change.

It’s informed by a vision of change and an understanding of local context. It emphasizes agility and value, and builds social capital and organizational capacity in the community.

In cities across North America, local community groups have undertaken a variety of immediate, direct actions that have kick-started the process of transformation, including: decorating intersections; installing DIY crosswalks and bike lanes; turning pavement into parks and plazas; guerrilla gardening; installing street seating and building excitement about proposed plans (“future-tising”).

Lydon’s talk drew a large audience who immediately went out and began applying the lessons to Hamilton: a friendly demonstration to promote turning a suburban intersection into shared space; a painted crosswalk adjacent to a pedestrian-unfriendly four-lane arterial; and DIY bumpouts at a busy intersection next to a school (see photo above from Raise the Hammer).

Last Friday, I asked the long-time crossing guard at the intersection with the “guerrilla bumpouts” what she thought. She immediately replied, “I like it!” The guard did not know who had installed the cones or what they were for, but she recognized that they made the corner a lot safer for kids walking to school.

The traffic calming “really controls the traffic. It was getting scary,” she said, noting that it forced the cars to slow down.

Other cities embrace citizen engagement and work with activists to legitimize their projects.

The campaign drew an aggressive response from the City’s general manager of Public Works, Gerry Davis, who reported the incidents to the police and issued a memo to Council calling the actions “illegal, potentially unsafe” and “vandalism”. City workers removed the installations.

Hamilton’s status quo of pedestrian- and cyclist-unfriendly automobile oriented streets, a legacy that has persisted for decades despite an official policy to promote walkable streets.

Notwithstanding the city’s stated vision, the traffic department actively opposes any changes that might disrupt the smooth, fast flow of automobile traffic.

In the face of decades of plans, mountains of evidence and literally dozens of urban planning experts, our leaders remain implacably opposed to the most basic transformations that would make our streets tamer, safer, more equitable and more successful for everyone.

If citizens are finally taking street design into their own hands, it is out of extreme frustration with the failure of city leadership, year after year, to make the necessary changes themselves.