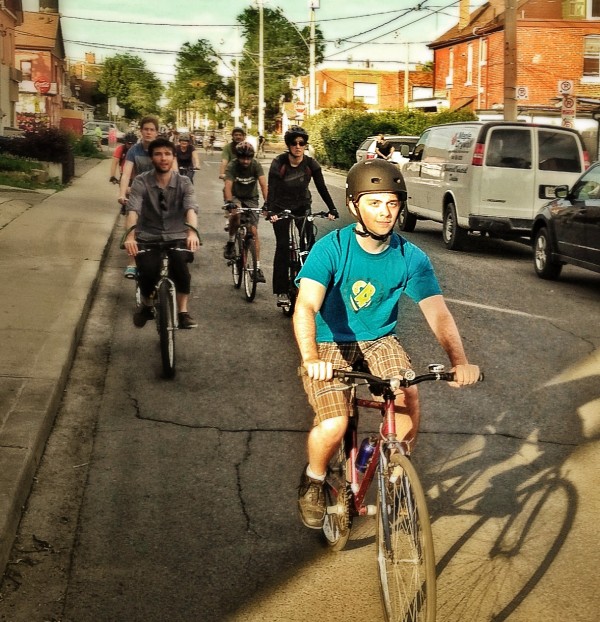 While listening to yet another “bikes don’t belong on the road” or “bikes scare me” rant from otherwise reasonable folks, the simple statement that ‘roads are public space’ receives a start of recognition. We may have forgotten, but in our gut, we all know this to be true: roads are public space. I call this forgetting, auto-amnesia.

Auto-amnesia takes many forms. There is something about cars that make people forget-perhaps that is part of their attraction. How often, when sitting in traffic, do we remember the enticing ads of wilderness and nature most automotive companies use? Conversely, how often when we look at those ads do we remember the long snaking lines of commuters? It’s odd but we seem unable to remember-if we did, wouldn’t we be mad? Wouldn’t we talk about false advertising?

How about the tendency to multi-task while driving? How do we forget we are moving in two tonnes of steel that can kill in an instant? How readily we eat and text and groom. How easily we overcome the fear of travelling 120 km an hour, when we feel a little pressed for time.  We seem unable to remember what we are actually hurtling forward at speeds where the slightest error can result in death.  Is this more evidence of auto-amnesia?

The costs of cars are yet another place this crazy amnesia takes hold. For many years, people remembered that roads existed before cars and didn’t run around insisting that cars paid for roads.  It is not uncommon for organizations and people to argue that drivers pay for roads through fuel taxes and license fees and shouldn’t cyclists have to pay too? Yet, the roads cyclists use are municipal roads, which are paid for by property taxes-not fuel taxes or licensing. Cyclists and pedestrians pay far more per kilometer of road used than drivers, yet somehow we forget this. We forget that only 60% of people in Canada own cars-certainly more than 60% of our road space is devoted to cars.

Perhaps the best example of auto amnesia is parking.  Cars created the need for wide spread parking. Using public space to park a car was initially irritating to the public (see Peter Norton, Fighting Traffic and Donald Shoup, The High Cost of Free Parking). But, somehow we came to accept that people could occupy the street for private use so long as it was for a car. If anyone tried to use a parking space on the street to set up a street game of ping-pong, or put some sofas out for the neighbours to sit and chat on, or god forbid, a non-motorized street cart sold something-they would quickly be moved along and people would see this as a good thing.  If a cyclist occupied a car length parking spot by using traffic cones to protect her bike there would be outrage. But, people park a car using the same amount of public space and we accept it as normal: auto-amnesia sets in and we forget they are using public space.

And of course, the great swathes of our communities occupied by grim, grey parking lots are perhaps the highest cost of auto amnesia. Every parking spot mandated by law, or driver demand, costs those who don’t drive time, money and aesthetic pain. Walking or riding across a parking lot to get to a store is downright miserable even for drivers. There is no such thing as an attractive parking lot, yet they line our streets and determine the look and feel of our communities. We talk about urban sprawl rather than automotive sprawl. We forget that sprawl is not caused by urbanity, but by cars.

Remembering our roads are public space is an act of reform. People who choose to walk and cycle are not slowing traffic or getting in the way-they are simply occupying public space in a legal way as people have done since time immemorial: roads were not created by cars.  Remember our streets are meant to connect us not divide us.