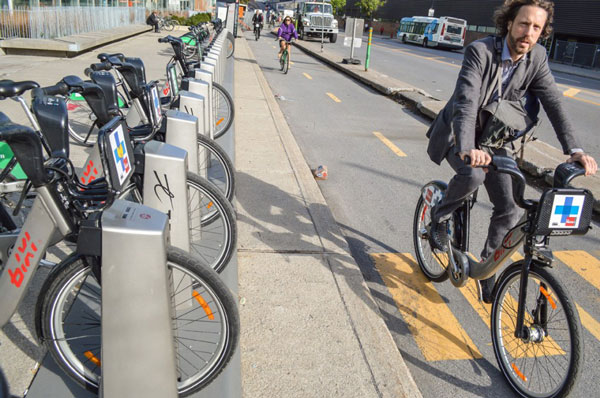 Author’s Note: Earlier this year, Vélo Quebec contacted me with a remarkable opportunity: to spend four days cycling around the beautiful city of Montréal with a notepad and a camera, as their guest for the Go Vélo Montréal Festival. This included a screening of the Cycle Chic Films at the Rendez-vous Cycle Chic, and two massive group rides (the Tour la Nuit and Tour de l’Île). I didn’t hesitate for a second, and recently found myself on a plane to one of my favourite North American cities.

[To view the full collection of photographs taken by the author, please click here.]

In the summer of 2011, Copenhagenize’s Mikael-Colville Andersen wrote a wonderful love letter to Montréal, in which he called it the “greatest secret bicycle city in North America”. It gets overlooked – he argued – because when it comes to building bike culture, North American cities tend to use their (chiefly ineffectual) neighbours as a yard stick, rather than measure themselves against far braver European cities like Paris, Seville, and Barcelona. Sadly, their myriad successes are seen as unattainable; their urban areas far more willing and able to embrace change. Quebec, meanwhile – with its own cultural heritage, identity, and language – is simply too “foreign” to figure into the daily consciousness of this continent, and somehow ends up lumped in with the rest of Europe.

Three years later, all of that is changing, as Mikael and other important voices are waking people up to what is undoubtedly North America’s cycling capital. Montréal now regularly tops lists of the most bicycle-friendly cities on the continent, and is often named one of the top twenty cycling cities on the planet. Their secret is (slowly) getting out; their compelling story is being told, and it is inspiring romantics, such as myself, to demand better than the half-baked policies, poorly-connected facilities, and dismal, single-digit mode shares officials and advocates have accepted for far too long.

30 Years Ahead of the Curve

To give credit where it’s due, when it comes to bicycle infrastructure, the City of Montréal has consistently remained 30 years ahead of the curve. While the rest of North America was busy wasting its time (and countless lives) with sharrows, door-zone paint, and Forester-inspired notions of vehicular cycling, Montréal wisely imitated the European cities who had long figured out how to mainstream the act of utility cycling: full modal separation.

In the early 1980s, a trip to Amsterdam gave Montréal’s head traffic engineer an idea how to satisfy nagging activists, who were demanding that the city provide better cycling infrastructure. He ordered his staff to build the continent’s first bi-directional, on-street segregated cycle track in 1985. Linking several major parks, it was designed primarily for recreational use. However, it was not long before residents of all ages started using it on weekdays for trips to work, school, and shops.

Development of the cycling network stagnated in the 1990s, but resumed in earnest in the early 2000s, well ahead of the recent explosion of interest in cycle tracks. Montréal now boasts the oldest and largest network of physically separated bike lanes in North America: an amazing 342 kilometres, 73 of which are on-street. Only now are their municipal counterparts realizing these facilities are crucial to increasing safety and ridership, and attempting to catch up, one kilometre at a time.

To understand how this impressive network came to be, one must look no further than Vélo Quebec, Canada’s largest cycling organization. Founded in 1967 as a provincial touring group, they now boast over 4,500 members, a full-time staff of 80 (with another 40 seasonal employees) working in four different divisions.

These various departments operate under one roof at La Maison des Cyclistes, a renovated turn-of-the-century home that now includes two floors of office space, and a ground-floor café, boutique, and travel agency. Its location in the vibrant Plateau Mont-Royal neighbourhood is no accident, sitting at the intersection of two busy cycle tracks that see a combined average of 11,000 bicycles each day.

While it continues to lobby for better infrastructure and policies across the province, Vélo Quebec also recognizes a tremendous value in the positive promotion of cycling. As a result, the publications division prints four different magazines, including a quarterly periodical specific to urban cycling. They also run Montréal Cycle Chic, a street photography blog that attempts to normalize the type of slow, simple, stylish cycling inherent to the streets of Copenhagen and Amsterdam.

Another central part of Vélo Quebec’s strategy to increase uptake is through events like the Tour la Nuit and Tour de l’Île, the latter celebrating its 30th anniversary this year. With 25- and 50-kilometres of open streets (respectively), these rides are more a communal celebration of cycling, rather than a race. They attract anywhere between 15,000 and 30,000 people each; drawing cyclists of all shapes, sizes, ages, and abilities out for a leisurely ride, conversation with friends and family, and a rare opportunity to see their city’s streets in an entirely different light.

The sheer size and staying power of the Tour de l’Île is truly a testament to how deeply ingrained bicycles have become in Montréal culture. Vélo Quebec (somehow) manages to change the route every year, infiltrating the remaining not-so-bike-friendly parts of the city, like a consciousness-raising Trojan Horse. However, local residents are (almost) always appreciative, lining the sidewalks, steps, and street corners with flags, bells, whistles, and shouts of encouragement to the passing cyclists.

“Hopefully, that kid sees us and says to his parents: ‘I want to do that!'”, a colleague commented as we passed a family waving from their balcony in an eastern suburb. Creating latent demand in an area currently starved for bike lanes is a subtle stroke of genius. And that’s the beauty of events like this: They inspire citizens to think differently about how they get around their city.

The Birthplace of BIXI

When it comes to Trojan Horses for city cycling, there are perhaps none better than public bike-share schemes, with which Montréal boasts a very personal relationship. City officials created BIXI (a hybrid of “bicycle/taxi”: the winning entry in a city-wide naming competition) in 2008, to provide a much-needed extension of their transit system. Its immediate success led to the rushed export of its technology to dozens of cities around the world, before spectacularly declaring bankruptcy, in January of this year.

Despite the recent, highly publicized financial failure of its export wing, BIXI’s domestic operation remains a massive point of pride among Montréalers. When observing a crowd of cyclists congregated at a stoplight along one of the city’s bustling cycle tracks, at least half of them are perched on BIXIs. That convenience and ubiquity is by design: with over 5,000 bikes, 400 docking stations, and an average of 25,000 trips each day, it is the second biggest bike-sharing program in North America, only recently bested by New York City.

Local politicians managed to find the $4.3 million needed to keep BIXI in place for 2014, but Mayor Denis Coderre has openly called for Montréalers to “show their love”, in this, a do-or-die year. That popular backing is crucial to save the scheme, as the city currently weighs its options, and considers the added expense of incorporating it into their public transit system. To an outsider, it’s as close to a no-brainer as it gets, as BIXI clearly provides taxpayers with a reliable, healthy, and inexpensive way to get from A to B.

The Borough as a Laboratory

One particularly interesting dynamic in Montréal is its division into 19 boroughs; each of which have their own mayor, who holds significant power over the management of local streets and public spaces. This facilitates and encourages a certain amount of experimentation at the local level, and the laboratory of Plateau Mont-Royal leads the way, while its neighbours often watch on in anticipation.

Borough Mayor Luc Ferrandez was elected in 2009 on a promise to make the Plateau more people-friendly. He governed under the assumption that the four years in power would be his last: swiftly implementing traffic-calming measures such as road diets, curb bump outs, parklets, reduced speed limits, and protected bike lanes. And while the Plateau has seemingly always been on the cutting edge of multi-modal transportation, it now boasts one of the lowest rates of car ownership (0.6 per household) and highest cycle mode shares (9%) in all of Canada.

Amazingly, despite sustained criticism from the media and other politicians, Ferrandez was re-elected by a significant margin last year, and shows no signs of slowing down. He just announced the Plateau would be reducing all speed limits (to 40 km/hr. on main arteries and 30 km/hr. on all other streets) and doubling the size of its bike lane network—moves that have put pressure on other boroughs, such as neighbouring Outremont, to consider similar changes. Their latest experiment will see the formation of two vélorues, streets where bicycle traffic has priority over automobiles, inspired by the woonerf living streets found in the Netherlands.

Not Resting on Their Laurels

One thing is for certain: the energy, invention, and ambition I witnessed first-hand in Montréal assures me that resting on their collective laurels simply isn’t an option. The sense of complacency I’ve experienced elsewhere shows no sign of setting in here, as they boldly look to the other side of the Atlantic, and continue to push the envelope around bicycle policy, infrastructure, and marketing. Sure there is marked room for improvement – most notably around how they prioritize snow removal and road maintenance – both of which act as significant barriers in a region known for its harsh and unrelenting winter.

Most importantly, when it comes to getting butts on saddles, Montréalers understand that North America is no longer a benchmark against which they should be measuring themselves. They surely have the leadership and vision to begin aiming higher, and competing with some of the world’s best cycling cities. They just need to take the sturdy foundation they have already built, and expand on it – without compromise – year after year. And if they do that, I have no doubt they will succeed, and I’ll return for a visit, again, and again, and again…

[To view the full collection of photographs taken by the author, please click here.]