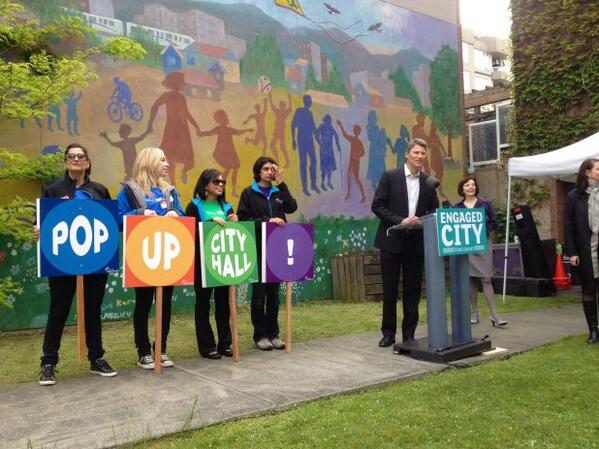 In October 2012, Vancouver City Council approved forming a Mayor’s Engaged City Task Force to give recommendations on how to increase Vancouverites’ sense of belonging and inclusion, deepen their electoral engagement, and address frustrations about access to municipal decision-making. The Task Force was a 2011 campaign promise of Vision Vancouver, the political party represented by the Mayor and a majority of city councillors.

The concept of an Engaged City Task Force was spearheaded by Councillor Andrea Reimer who is the Mayor’s lead on engagement issues. It evolved out of two observations. First was her observation that past efforts in enhancing engagement were ‘interest based’ vs. ‘neighbourhood based’ discussions that were not representative of the city’s diverse population. The second came from a finding in the 2012 Vancouver Foundation report on Connections and Engagement showed that the residents who have regular contact with their neighbours are more likely to be engaged in neighbourhood and community activities—and ultimately with City Hall. 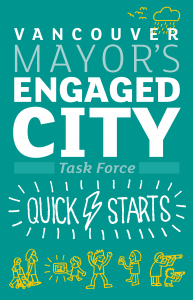 The issue of an engaged city is a big issue to take on. While is it is important to have a big goal to aim for the Task Force thought it was equally important to have short term actions to keep up the momentum and measure progress. As a result, a series of ‘Quick Starts’ (pdf) were developed that could be accomplished within a six month time frame. These Quick Starts were designed as short term pilots to test ideas emerging from the Task Force and show that the City was serious about finding ways to improve the quality of residents’ experience engaging with City Hall.

One of the first Quick Starts identified was ‘engagement at a neighbourhood level’. There was a concern that parts of the city are disconnected from City Hall, and that—for many Vancouverites—travelling to 12th Street and Cambie was challenging; whether because of mobility issues, time constraints, or geographic location. While some City Hall information and services are now online, many residents still prefer a personal interaction to get direct services or ask a question in person.

The City of Boston’s successful “City Hall to Go” program inspired the first idea for a pilot initiative to implement this Quick Start. When the Task Force learned about Boston’s mobile city hall, they jumped on the idea immediately and saw it as perfect fit for Vancouver.

Through the months of May and June 2014, a series of Pop-Up City Halls were hosted throughout the city. They offered a variety of services, including picking up a recycling box, a Stanley Park or cycling map, or finding out about neighbourhood public consultations. They also offered customized support like translation services. The goal was to improve service levels and to encourage active participation with the City.  According to City of Vancouver 311 Contact Centre Manager Darcy Wilson, the City wanted to “speak to people in their language, in their communities”.

The 11 locations included the PNE grounds, Grandview Park, the Trout Lake Farmer’s Market, Sir Charles Tupper Secondary School and several community centres around the city. Pop-Up City Halls also appeared at community festivals like Car Free Day on Main Street and the Collingwood BIA Festival. The decision to focus on Vancouver’s eastern and southern neighbourhoods came from data that showed the area as underrepresented in terms of civic engagement; including less use of City Hall services and lower voter turnout.

The City promoted the pop-up locations through the City’s digital and social media channels, with posters in community centres, as well as through cross-promotion with community events. However, the majority of interactions emerged spontaneously from people walking by on their way to other locations. According to Wilson, many of these “people thought it was a great idea, even though they were not expecting it”. Councillor Reimer found that people were quite willing to engage on the streets while going about their daily business.

Vancouver’s Pop-Up City Hall was an example of ‘tactical urbanism’—agile interventions that improve our cities in discrete ways. These low-risk activities help expose both residents and decision-makers to novel ways of delivering city services, with the goal of improving the way cities operate. As Councillor Andrea Reimer noted, “we will never be able to innovate if we demanded outcomes”.

According to Councillor Reimer, “engagement is a journey, not a destination.” The Pop-Up City Hall ‘Quick Start’ was a first step in exploring new ways for the City to engage with its residents. It wasn’t intended to be magic bullet. Quick Start initiatives like the Pop-Up City Hall will inform the continued evolution of the Task Force, and help foster the broader cultural changes that are needed—both within City Hall and the community.