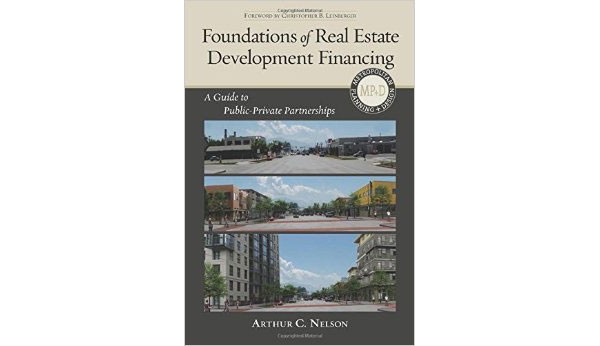 Working and living in a city that is currently in a large development swing after the last recession made me curious to dive into Foundations of Real Estate Development Financing: A Guide to Public-Private Partnerships. Although I was broadly introduced to public-private partnerships (P3) developments – and their respective structures – in school, this book put information on the topic together in a very accessible manner and filled in much of the gaps in my education. Even for a laymen, like myself, the nature of public-private partnerships were far more clear.

Although admittedly, at times it was difficult to get through some of the charts and equations, it didn’t feel that anything was lost if you didn’t fully understand all of the content. Nelson did a great job of making sure that the technical data was there to enhance the more easy-to-digest content.

Structurally, Foundations is broken up into four parts that incrementally break down the development finance process. The introduction, which is titled The Future of America Is Redevelopment, and the Future of Redevelopment is Public-Private Partnerships, sets the stage as to why redevelopment is integral and how P3 (public-private partnerships) enhance the ability for areas to redevelop when traditional means (private investment/solely public interest) wouldn’t carry enough clout to drive change. In a nutshell:

And, according to Nelson, there are many benefits that come from the engagement of both parties that ultimately lead to better outcomes for the community – such as new infrastructure, better property values, and higher return on investments (ROI’s) – by virtue of the fact that each party can bring to the table a set of skills the other doesn’t have.

Immediately after the introduction, the book jumps into The Cycle of Development, Optimal Redevelopment, Redevelopment Goals and Benefits, and Barriers to Redevelopment. As one can tell the name of each chapter is quite indicative of what one is going to learn in the coming pages.

Each chapters starts off with a synopsis, breaking everything down to the bare essentials, and gives the reader an idea of content and what to look for. As mentioned, the pages contain varying levels of information, from the easily understood to more intense data sets.

One part I was particularly interested in was the Cycle of Development chart which shows that the value of land is always increasing, while along that path there are peaks and valleys where development should take place. In a valley, the cost of demolition is lowest – the culmination of  a structures value steadily decreasing after initial construction. After demolition, a resurgence of value is attributed to the building before a steady fall again, when demolition and redevelopment again makes the most fiscal sense.

Nelson also closes out every chapter with a brief case-study of a redevelopment, and ties the information through tables and graphs back to the information learned in the chapter. Throughout, he does a good job of not confusing the reader by adding information that is unnecessary, keeping these case-studies relevant to the topic at hand and articulated his main points effectively.

In Real Estate Finance and Development Basics, Nelson makes a comment about different types of development uses that really stuck with me contextually (thinking about the growth locally in Metro Vancouver). In regards to the importance of transit/walkable activities, Nelson states that his, “research indicates that there may be sufficient market demand for transit/walkable urbanism that even if all new residential development provided this option of urbanism to midcentury, the demand would still not be met.” Something to surely think about with Metro Vancouver’s transit referendum around the corner.

While this is not a large part of the book, the topic of transit and walkable communities does appear a few times throughout as ultimately positive – such as boasting in favour of developing transit corridors through areas slotted to be redeveloped for maximum gains.

As one delves further into the book, it becomes more technical, and a little bit more of a glossary of terms that are important to developers (public or private). These sections start to outline the different tax credits, agencies, and financial options that can be utilized for optimal returns and levels of success. Although these focus on the American context, it will still give parties relevant information to start their search here in Canada as well.

In the final chapter, America’s Progress Depends on Redevelopment through Public-Private Partnerships, Nelson wraps everything up nicely and focuses on the fact that “the emerging American landscape will be dominated by infill and redevelopment of vast stretches of underdeveloped commercial corridors and suburban centres, especially those connected by transit.” He continues in this vein, and highlights some key facts that the Urban Land Institute believes will “refine P3 engagements in the future,” the biggest of these factors being that the whole process maintains a higher level of transparency and understanding between all those involved.

The main principle of P3’s is really quite basic and simple: collaboration. As this is something we are discovering across industries, we are finally bringing the idea back to our infrastructure and the development of cities. When we work together, we bring different strengths and options to the table. The public aspect of a P3 gives new abilities to the private developer that they may have not been partial too otherwise – such as different means of financing and different tools to survey land. On the other side, private developers can offer insight to the public realm that they have garnered after years of experience.

These are obviously a small sampling of what is gained in a P3 relationship, but suffice it to say that the general pubic can benefit greatly from these joint ventures – from increased infrastructure improvement and better property values, to more transit-oriented projects and increased environmental sensitivity.

Upon finishing Foundations of Real Estate Development Financing: A Guide to Public-Private Partnerships, I definitely felt that I had a much better understanding of the intricacies of development and its financing.  I also feel that if I went through it a second time, looking more closely at the equations, charts, and graphs, I would be able to pull even more from this thickly packed, yet compact and easy-to-read book. It won’t be for everyone, but if you are interested in the world of development in any facet, it is definitely worth a read.