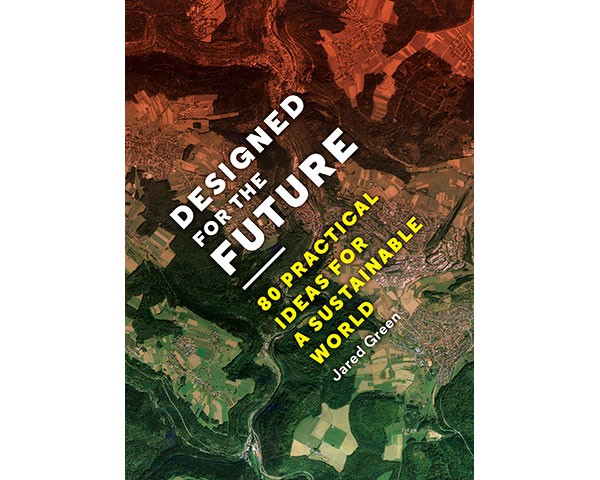 Sometimes the strongest way to get a message across is through simplicity. When dealing with a topic as broad as a “sustainable world” it could have been easy to slip into the trap of writing a complex book that scared away readers and distanced them from the inspirational stories inside. What Designed for the Future: 80 Practical Ideas for a Sustainable World did instead, was inspire hope and a vision into projects that are changing the world around us piece by piece. Ranging from architectural studies, interiors, products, and even some artistic or theoretical planning pieces, the book keeps the information concise and easily attainable.

Interestingly, instead of the author – Jared Green – picking his favourite ideas and writing about them, he brought together leaders throughout multiple industries and had them choose something that had inspired them. Names like Bjark Ingles and Elizabeth Mossop are dotted within, in no specific order. There is no hierarchy to the way the book is presented, no idea better than the last, but simply an overwhelming sense of hope in a time when we read a lot about the negatives human beings are perpetrating on the world.

The book follows a constant format from beginning to end: The title and author on the top right followed by a brief, one sentence description, and then a longer breakdown, never exceeding the one page. To the right of this is a single or collection of images that portray what the idea is. This simplistic way of guiding people through the book makes it not only easy to pick up and put down as needed, without feeling like you were breaking away from something at a critical point, but also allows for a quick reflection if you are ever in need of an inspirational burst.

To go through all of the 80 ideas shown would ruin the fun of the book, but to highlight a few and show the broadness of the book would do it justice, and hopefully entice you to pick up a copy for yourself. As mentioned before,Elizabeth Mossop chose a topic that she breaks down to, “use creativity to influence established systems.” She goes on to talk about the Changing Course competition, which focuses on a way to rethink the Mississippi River.

One of the key aspects of this article, for me, was the collaboration. As Mossop writes: “Privately funded nonprofit organizations are cooperating with the state, the U.S. Army Corps of Engineers, and academic institutions to generate ideas an develop a new paradigm for the river.” The reason this is happening is because of the rapid loss of wetlands surrounding the Mississippi River and the “huge amount of pollution that enters the Gulf of Mexico.”

As highlighted above, the beautiful part about this collaboration is that it is allowing designers to work with engineers and government planning entities to take a design-focused approach to dealing with these complex problems. As it is a contest, we won’t know yet if any of the design ideas are implemented, but the overarching promise is that people are getting together and stripping away titles to allow design thinking a chance to correct a major challenge.

Some of the ideas are more broad. Thomas Balsley directed his attention to “The City” as a whole entity, or an overarching idea. His write-up is short and to the point, which is rousing in it of itself considering the scope that “The City” as an abstract idea takes on. He sums it up best in his last paragraph: “This invention called the city impresses me. It’s a phenomenal device. Great thinkers since the Greeks and earlier have seen why the city works and what it means for humanity. It’s key to the preservation of the planet. I’m putting all my money on the city.”

Technology also has a place within the book, as evident in the Media TIC building, written by David Garcia. “The building uses new technology not as a gimmick but as a new way to mitigate environmental challenges.” The facade of the building can adapt itself for thermal gains and losses from the sun, and as Garcia states, the technology is not a gimmick, but rather being used in a way that will actually benefit the occupants and the city in which it is located by reducing power consumption for heating and air conditioning.

In an almost perfect juxtaposition, the following page by Eva Franch I Gilabert focuses on the Merian Map of Paris, “a map of paris from 1616 [which] depicts not only the city’s plan but also its different inhabitants and social strata.” To move from something that is a technology only available in the last 5-10 years to a map that is almost 400 years old says something about the state of sustainability; that it is available through almost any facet (be it technological or otherwise).

Gilabert sums it up best when she states that “History and time are both latent in the present moment.” We have never been without the issues of “sustainability” but obviously, in the present, they have taken on a different meaning. The map itself outlines all the different people that make up the city, which refocuses the reader on the human aspect of why we want to fix the problems at hand. A city is made up of a myriad of people with different backgrounds, social structures, incomes etc. and in order to help the city as a whole, one must remember the subsets of people that make up the city first.

In a nutshell, Designed for the Future: 80 Practical Ideas for a Sustainable World is everything about sustainability without reducing it to the “greenwashing” we see so frequently. Not everything focuses on Co2 emissions and climate change. There are many aspects of the book that bring us back to times when people were the central focus, when helping humanity was the basic tenant to create a more stable and sustainable culture.

The book also shows that the wide blurry lines around certain professions, a necessary endeavour if we are to change the thinking processes of individuals and groups to think more critically and from a problem solving, designer, stand-point. It is all these subtle things that make the Designed for the Future: 80 Practical Ideas for a Sustainable World such an inspirational read, that one can quickly refer back to in a time of doubt or uncertainty.