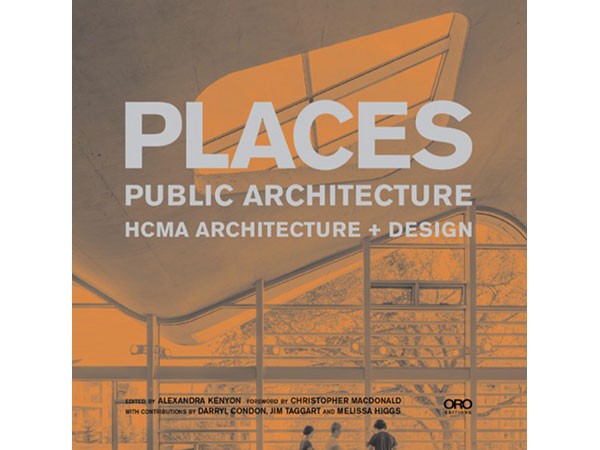 “This book provides a primer for architectural practitioners and the public alike; a portfolio of projects completed by a firm that, over its 40 year history has devoted much of its creative energy to the enhancement of the public realm. Whether streets, squares, or buildings, these projects are “places” in the architectural sense – public spaces where people want to be, where they can meet and mingle on equal terms.”

– Jim Taggart, from ‘Toward Social Sustainability’

In 1991, Herman Hertzberger wrote in his ‘Lessons for Students in Architecture’ about an analogy of the warp and the weft of a loom to the modern city, equating it to the relationship that exists between architecture and infrastructure. With our present day conversation now focused on both environmental and social sustainability, there is much more to be taken from this layered analogy, as our current discussion about the importance of creating rich cultural spaces is seen as being just as important as creating environmentally responsible buildings. Much the same can be said looking at the work of HCMA, and is clearly evident in this new book form ORO Publishers.

With an introduction by Christopher Macdonald and contributions by Darryl Condon, Jim Taggart, and Melissa Higgs, presented here are the latest projects from this award winning Vancouver-based office, and is the much anticipated follow up to their first monograph Pools from three years ago. As HCMA partner Darryl Condon points out in the book’s introduction, the projects featured within—three libraries, a daycare, a school, and a fire station—much like the projects in Pools, are the fruits of several decades of iterative explorations of these and other building types, with each successive design informed by the public experience of those that preceded them. As he notes:

Through this progression we have recognized convergence within the wide range of public building types and the shared potential that each possesses. Along the way, the notion that public facilities can, and should, help transform communities has shaped our work.

The result is a thoughtful and measured sampling of HCMA’s growing body of work, with photography by Nic Lehoux, Martin Tessler, Darryl and others, providing the visual material for the selected projects in the book. One shot in particular of the Whistler library covered in snow, complete with three foot long icicles on its eaves, speaks to the challenges the body of their work has tackled on each project. Interspersed with the photography, examples of the iterative process each project had undergone in developing its design are presented here – whether by old school physical models or new school computer sketches, there is evident a rigour in their process which has resulted in several award winning designs.

In the section of the book titled ‘HCMA Culture’ we are presented with the outcomes of a series of design charrettes which are part of the office’s day-to-day work activities. This opportunity to constantly interact with all the members of their firm reinforces the billable work the office does such that one is constantly playing off the other, creating an environment that is a true atelier. This culture has grown out of the firm’s ongoing succession plan from the culture of Roger Hughes’ original office to this newest iteration which includes Darryl along with Karen Marler, Stuart Rothnie, and Carl-Jan Rupp.

The foreword and three essays that begin the book provide the theoretical underpinning for the rich visual material that make up the bulk of the book. Beginning with Christopher’s Macdonald metaphor that the different gradations from public to private space can be understood as contours in a landscape, and how HCMA finds itself currently situated in this topography, this provides the point of departure to discuss the office’s new business model and overall philosophy.

In his introductory essay, Darryl Condon describes the public architecture HCMA is currently immersed in as a mutual relationship between the practice’s contribution to the larger public realm, with the end goal of enrichening the community in which their buildings find themselves. He concludes his introduction with nine salient points which comprise the office’s current design philosophy.

The next essay by Jim Taggart, an exposition on the importance of social sustainability to our built environments, reveals how HCMA have considered this as an integral element in their design methodologies since the early days of the office, some four decades ago. With the first part of the essay an exposition on Jane Jacob’s “ballet of Hudson Street,” the second part of Taggart’s essay gives us a history of HCMA, beginning with Roger Hughes, and his early years of doing social housing projects while a student at the Architectural Association in London. Roger knew from the start he was interested in the public realm, and returned to Vancouver in the 1980’s and opened shop “with the aim of creating architecture that would serve the needs of the community.”

Jim points out the similarities in Roger’s 1981 Sixth Estate Project in Vancouver with HCMA’s recently completed Millwoods Library project in Edmonton, the latter featured in Places. As he further points out, “the primacy of social space is a recurring theme, both as an organizer of program and a generator of form,” which can also be seen in Roger’s first school commission in 1991, Rogers Elementary located in Saanich.

In the last essay in the book’s opening section, Daryl Condon discusses the cultural ties between libraries and the public realm, citing both classical and modernist precedents, from the 2nd century Library of Celsius in Ephesus to such modern exemplars as Louis Kahn’s Exeter Library and Gunnar Asplund’s Stockholm Public Library. He observes that they all stand out, not as just great buildings, but as great public places. Condon also points out how the philanthropist Andrew Carnegie had selected the library as the building type to better society and spread literacy.

Condon further cites modern exemplars of libraries as influential on HCMA, including Rem Koolhaas’ Seattle Public Library along with Toyo Ito’s Mediatheque in Sendai, adding that these modern libraries have successfully integrated both old and new forms of media collection and that, ultimately, the role of the library to the public is continuing to evolve in our age of hyper-information. He concludes by humourously pointing out that the 100,000 books in Alexandria’s great ancient library at its peak, in 300 BCE, could now fit into a single smartphone.

The projects selected for the book are appropriate and indicative of the firm’s youthfulness, especially with the inclusion of the design and construction of playpark furniture to accompany the daycare featured in the book. With young children of their own, this is just as much an observation that the firm’s younger interns and architects can relate well to the daycare building type, quite often an adjunct to the school architecture the firm is renowned for.

The three libraries selected represent the ideals that Darryl describes in his essay—these are indeed strong places in the communities they have been built for, each designed as a product of its environment, and with award winning results. One of the book’s highlights is the depiction of the wonderful central wood wall in the Duchess Park Secondary School, itself acting simultaneously as both HVAC and a central gathering place for the school.

Overall, this new monograph from HCMA is a visually rich exposition on the state of social sustainability, and a most formidable companion to their similarly formatted Pools. One can only hope it will be joined soon by a third volume, perhaps featuring their civic architecture, with municipal facilities like their recently completed Anvil Centre in New Westminster, along with their museums and other cultural venues.

Most importantly, Places provides a current snapshot of this firm’s philosophy: that theirs is an architecture with a conscience, contributing overall to a discussion about socially responsive buildings. Ones that, not only create public realms, but enrich them. With HCMA citing the influence of both Jane Jacobs and Jan Gehl, the partners at the firm, along with the books writers, have ensured the next generation of architects and planners will continue to invest in social sustainability through thoughtfully built form.