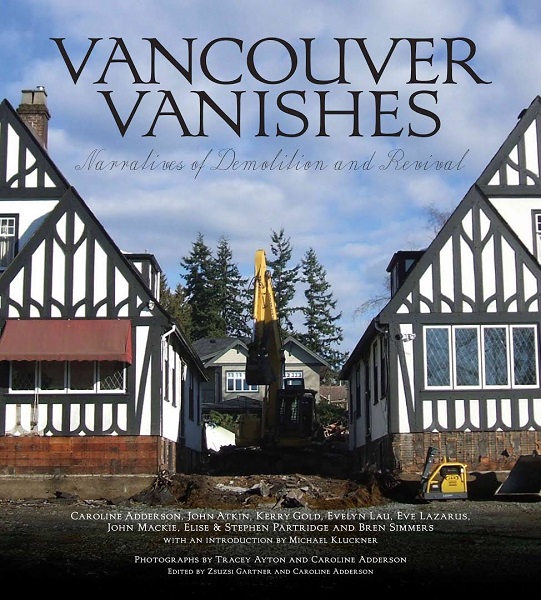 “Since 2005, nearly 9,000 demo permits for residential buildings have been issued in Vancouver. An average of three houses a day are torn down, many of them original homes built for the middle and working class in the 1920s, ’30s and ’40s. Very few are deemed significant enough to earn the protection of a heritage designation, but they are part of our heritage nonetheless and their demolition is not only an architectural loss. When these old homes come down, a whole history goes with them – the materials that were used to build them, the gardens, the successive owners and their secrets. These old houses and apartments are repositories of narrative. The story of our city is diminished every time one disappears.”

With affordable housing in the Metro Vancouver region now a daily topic of discussion, Vancouver Vanishes – Narratives of Demolition and Revival by local novelist Caroline Adderson is a formidable addition to the conversation. Combining several photos of demolished Vancouver homes, the book’s main events are the stories and essay contributions from some of the heritage community’s most outspoken proponents, including Michael Kluckner—who provides an update since he published his similarly titled Vanishing Vancouver a few years back. The editor of the book provides an alarming snapshot of the predicament we presently find ourselves in, while Kluckner gives us a brief history on how we came to be in this predicament.

For the editor and author of the book, Adderson admits the subject matter is personal—who’s home isn’t after all?—and this is clear from the three essays she contributes to the book. The first tells the story of two Tudor homes that came close to being demolished but were saved, the second documents the changes on a city block in Vancouver’s Kerrisdale neighbourhood, in which she also lives, with the third specifically about the house she lives in. This is a prevalent theme for the other contributors to the book, as Eve Lazarus gives a history of her neighbourhood in the West End of Vancouver. Similarly, John Mackie and Kerry Gold give descriptions of the city blocks on which they live.

All agree that given the current staggering number of demolitions, at the very least there needs to be a photograph (or painting in Michael’s case) to capture the story that the house ever existed, before the bulldozers have their way with them. This is of course what the Vancouver Heritage Foundation has been doing already to the best of their ability, but knows it has become out of hand when even the B.C. Binning House is almost lost to market forces. Everyone is doing what can be done, including the UBC School of Architecture and Landscape Architecture, by starting a book series that will document houses before they are demolished, and having started with House Schumiatcher.

Michael Kluckner has already produced several books on the subject, to which he refers to in his introduction. He offers us an update stating that things have not improved but in fact have worsened:

Vancouver now has the economy of Honolulu, the wages of Halifax, and the cost of living of San Francisco. Unchanged are city and provincial government policies: a building code that makes renovations very difficult, a tax-assessment policy that says the land is typically 90 percent a home’s value, and zoning that allows a Great Big House in many Vancouver neighbourhoods.

As a former walking tour guide who used to lead tours through the West End, I appreciated reading Eve Lazarus’ essay ‘Our Missing Heritage,’ including several stories about the area, including the former Englesea Lodge that used to sit adjacent to Stanley Park, on Beach Avenue. The building mysteriously burned down in 1981, and conveniently solved for the City of Vancouver the problem of what to do for what should have been a protected heritage building, whose same architect W.P. White had also designed the area’s much beloved Sylvia Hotel.

Walking through the current West End, there are a few protected survivors, including the Gabriola on Davie Street, the St. Paul’s Parish Church on Jervis Street, and the former home of architect Thomas Fee, who—along with his partner J.E. Parr—built many of the apartments and homes in the West End. Yet some of the fabric in the West End continues to disappear every year, as has been typical with the need to provide increased density in the area. And over the years, structures of equal significance to the Gabriola and Sylvia Hotel have been lost, as Eve Lazarus points out how another of architect Thomas Fee’s homes, which stood at Gilford and Comox and was converted into the Park Gilford Hotel, was torn down in 1961 without even so much as a photograph of it left behind.

In Caroline Adderson’s first essay, she recounts the story to save two 1920’s ‘storybook’ homes in her neighbourhood, the ‘Dorothies’ as she refers to them, and which are featured on the cover of the book. These houses are key because they were the moment when she first found herself thrust into the architectural preservation movement, having taken on the juggernaut of real estate forces to not only save them from the wrecking ball, but have them lifted off their foundations and relocated. She admits that since that time in 2013, she has educated herself on the subject so she can speak on such subjects as inner city gentrification, as well as learning the basic lingo like something as basic as what a gable roof is.

She also cites Jane Jacobs, specifically her observation from The Death and Life of Great American Cities, that a city block needs some atrophy, as its lesser value will allow for the block to keep regenerating and consequently avoid becoming homogeneous. This lesson seems to have been missed in our current planning miasma in Metro Vancouver, so policy driven in its lofty goal to be the greenest in 2020 that there is no wiggle room for innovation. This is evident in much of the author’s sentiments throughout the book.

In her second essay for the book, ‘The End of the Leigh Block,’ the author starts up with a Stewart Brand quote from his book How Buildings Learn, also an apt allegory for what has befallen this modest Kerrisdale block over the years:

A building is not primarily a building; it is primarily property, and as such subject to the whims of the market. Commerce drives all before it, especially in cities… Cities devour buildings.

Suffice to say, with the recent sale of the Arbutus Corridor by Canadian Pacific Rail to the City, Caroline is sure to see even more transformations in her neighbourhood than she offers up here.

The other contributors to the book have been appropriately selected, including long time heritage advocate and walking tour guide John Atkin who provides some facts to accompany the book’s anecdotes in his essay ‘Demolition: It Happens.’ In it, he remarks how demolition has always been a part of the City’s history, whether as the result of the CPR or the Bartholemew Plan. In fact, he points out that until the heritage preservation movement began in the 1960’s, it was just business as usual to replace an older building with a more modern one. This is clearly evident in the demolition of the original Hotel Vancouver:

The massive rebuild of such an important structure, only twenty-four years old, points to the incredible growth Vancouver was experiencing due to the importance of the port on the eve of the opening of the Panama Canal. The Vancouver World simply noted in April of 1912 that along with the hotel, three other significant structures at the corner of Granville and Georgia were about to be replaced.

What such indifference means to our current over inflated real estate environment remains to be seen, with recent announcements by both the provincial and federal governments to get things under control still yet to produce any tangible deliverable. Vancouver Vanishes raises a red flag that such wanton disregard for our built heritage as the current market forces allow will not be accepted, and crusaders like Caroline Adderson, along with Michael Kluckner, and many, many others will continue to remind the government, developers, and financiers why one may not simply bulldoze our past for profit.

The book sadly is also the canary in the coal mine, as the two saved houses on the books cover are small consolation for the 83 on the back of the book that have been demolished, which the author lines up mugshot-style next to their piles of rubble, post demolition. It is also a reminder, as its title indicates, that this is happening right before our eyes, as one reads these very words, and that perhaps it is not yet too late to stop our region’s ‘storybook’ homes from all but disappearing.

For more information on Vancouver Vanishes: Narratives of Demolition and Revival, visit the Anvil Publishers website.