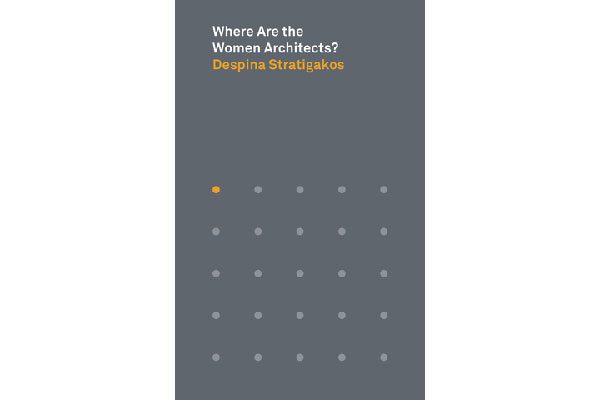 The title says it all.

In this poignant, frank, and succinct volume, University at Buffalo State University of New York associate professor Despina Stratigakos traces the ‘surprisingly long history’ of women’s struggles in the architectural profession in the United States from the 1870’s to today.

She paints a dire picture of how and why a centuries old profession has failed to address gender equality in the workplace and classrooms. Stratigakos’ research contrasts what people have long thought were responsible for the workplace gender split: women having children, and assumed lack of respect on construction sites. Instead, Where Are the Women Architects? suggests an industry-endemic combination of masculine-feminine trait associations, lack of role models, erasure of historical record, salary gaps, and continued discrimination against women in offices.

It would be an understatement to say that the practice of architecture has been slow to make significant grounds in reaching equal representation in the workforce. As Stratigakos states:

In 2000, women represented 13 percent of registered architects; today that number stands at 19 percent. If this rate of progress holds, we will have to wait until 2093 before we reach a 50-50 gender split.

My own quick comparison* with practicing physicians (34%), lawyers (33%) in America still show women in the minority, with architecture in last place. In the Architecture, Engineering, and Design (AED) industries, Interior Design (69%) leads the way, followed by Landscape Architecture (36%), and Civil/Architectural Engineering (18%).

But What About in Canada?

We are a Canadian publication after all, and I often find myself asking this question. Another quick internet survey* yields the following percentages of women practicing in their respective fields:

– *all statistics from the last 6 years

What You Need to Know

Stratigakos centres her discussion of the more recent movement for gender equality in architecture around four significant topics:

Throughout, she traces the history of women in architecture and their relationship to design awards and enrolment in academic programs. She details the perceptions and actions of oscillating advocacy movements in the 1920’s, 1970’s, and 2010’s (today). The book is a requisite primer on women in architecture—easily digestible in one sitting considering the impressive amount of footnotes and references from years of the author’s research.

So What Can We Do?

Where Are the Women Architects is both an historical account and a call to action. Men and women alike have a lot of work to do in order to reach equality in gender distribution. This includes correct perceptions and understandings of what that equality means. Stratigakos points out that ‘the pay gap between male and female architects, although still pronounced, is slowly closing,’ yet ‘a third of male practitioners asserted that they were not paid more than their female colleagues, while only 5 percent stated that they were; many chose to skip this question on the survey‘. This, in addition to 82% of male architecture students naively stating there are ‘as many opportunities for women as there are for men in architecture’.

There is a need for advocacy, education, and clarity around this issue, but also emphatic day-to-day conversations. Discuss the merits and criticisms of a doll dressed as an architect over a beer with co-workers and classmates. Openly address when employers or co-workers make off-hand comments about women, whether you are male or female. Seek mentors and mentees who are women to help transition women graduates into practice. Write or edit Wikipedia entries on women architects. Bring a friend or co-worker of the opposite gender to an event hosted by an existing local advocacy group:

The question of Where are the Women Architects? is one that continually needs to be answered in order to break the glass ceiling for women students transitioning into practice and girls to pursue architecture as a career, in general. If we are successful, the outcome will surely be more equitable city-building and design processes.

If you want more information on Where Are the Women Architects?, visit the Princeton University Press website.

Shelley Long is a landscape designer in Vancouver, BC who is interested in cross-disciplinary collaboration in environmental design, Canadiana, and placemaking through spacemaking.