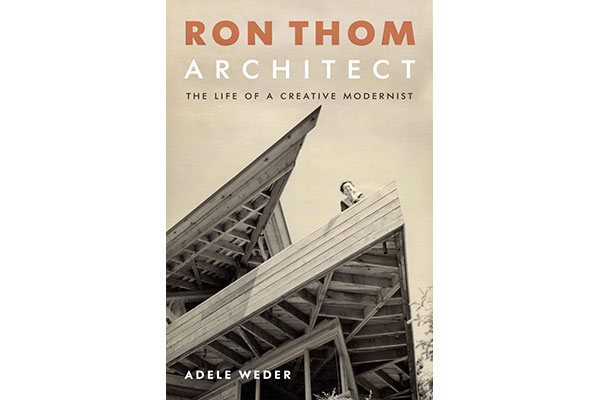 Drawing on extensive archival research and over one hundred interviews, this definitive biography – filled throughout with historical photos – sheds new light on one of the most important architects of his generation, and on a transformative era in Canada’s cultural history.

Ten years in the making, Ron Thom Architect – The Life of a Creative Modernist is an artfully composed collection of revelations on its subject, providing us a glimpse into the life and career of one of the nation’s greatest West Coast modernists. At long last giving the architect his due as one of Canada’s most important and influential architects, architectural critic and curator Adele Weder has also included the narratives of several other important Canadian architects alongside Ron’s life. With Thom’s lifetime concurrent with many Canadian landmark moments, the author also interweaves the nation’s centennial and Expo ’67 with Thom’s career, including several seminal moments in the history of the two cities he practiced in, Vancouver and Toronto, as well.

The subject matter is certainly no stranger to the author—Adele has been researching Thom since doing her master’s thesis on him at UBC, and more recently has authored one of SALA’s West Coast Modern house books on Thom’s Copp House. In 2013, she curated the book and exhibition Ron Thom and the Allied Arts, such that this new book is a career capstone for her, gathering as it does in one place the culmination of her research on Thom through the interviews and archival photos she has amassed over the years.

Coming in at just two hundred pages, the book’s 21 chapters are divided between Thom’s time in the West and East respectively. Adele condenses his childhood into the first chapter, noting how he grew up in a working-class neighbourhood, and how his mother wanted him to become a concert pianist. At the Vancouver book launch this past September, Adele noted humourously how grand pianos often ended up in Ron’s floor plans, despite clients not owning or asking for one.

The matters of Ron’s personal relationships are handled deftly by Adele in the book’s narrative, and she notes in the Foreward going to great pains to ensure she did not use any material not approved by members of the surviving family. She also discusses her subject matter’s excesses as delicately as possible, much to her credit, such that it never distracts from the spectacular architectural achievements that are at the core of the book.

Those who know the story of Ron’s early training constantly marvel at his good fortune, as he was schooled at the Vancouver School of Art—now Emily Carr University—when Jack Shadbolt and Bert Binning were teaching there, both of whom Adele notes would have had a profound influence on his career choice. While Shadbolt encouraged him to pursue painting, it was Binning who told him to pursue architecture.

As a young architect in booming Vancouver, Ron soon found himself at the busy architecture office of Thompson Berwick Pratt (TBP), most notably under the wing of its senior partner Ned Pratt, who would later become both Ron’s mentor and nemesis. At the time, as Adele describes it, Ned divided his office into two types of architects—”neck-up” vs. “neck-down” types, summing up the distention between himself and Ron, respectively.

One Vancouver project, in particular, would come to define Ron’s early career, the B.C Electric building which Adele recounts in ‘Electrifying the West.’ Completed in 1957, the building at the time showed Vancouver as a forward-thinking city, and TBP as the architecture firm that would be the ones to move the needle.

And with the firm busy designing the new YVR and UBC campus along with many other projects, several designers at TBP did work on the side, designing single-family homes for the post-war housing boom. Ron was no different. After designing his own house on a site in North Vancouver, he offered to design his neighbour’s houses as well, free of charge, to maintain the overall street aesthetic.

As it happened, his successes in Vancouver would attract the attention of several movers and shakers out in central Canada, including the founders of two new university campuses—Massey College in Toronto and Trent in Peterborough. With these new powerful patrons, Ron was able to apply his design to the entirety of the project, down to the light fixture and ashtray designs. One of Adele’s interesting asides is how Ron’s getting awarded Trent so incensed Peterborough’s local architect, that he moved to Toronto. The architect was in fact Eberhard Zeidler, who would go on to design Toronto’s Eaton Centre and Ontario Place, and who recently passed away.

Adele also provides some asides on how many of his contemporaries crossed paths with Ron at the beginning of their careers, including Barry Downs and Jack Diamond, both of whom we sadly have lost just this past year. Adele admits as much in the book’s opening pages that several of her source interviewees have now passed away, highlighting the need to preserve this oral history before those who remember Ron are all gone.

For this reason and more, Ron Thom Architect is essential reading for anyone who has even a passing interest in Canadian architecture, and even more so for practicing architects and students. Adele here has demonstrated her skills as an expert storyteller, having culled through what must’ve been a mountain of material to make this an entertaining and richly informative book.