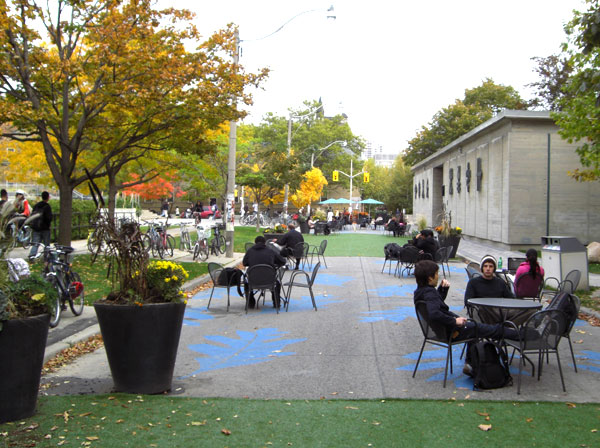 Last week, I went to have a look at how the new pedestrian space pilot project in the University of Toronto is coming along. A block of Willcocks Street, between St. George and Huron, has been closed to traffic and turned into a public square. The project uses the model of New York’s closing of Times Square, using inexpensive, temporary materials to see the impact of the project before any significant, permanent changes are made. As part of the same initiative, Ryerson University has made a section of Gould Street into a pedestrian space as well.

Both universities partnered enthusiastically with the City to implement these projects, agreeing to maintain the spaces if the City provided the start-up costs. The City bought planters and chairs and tables to close off the streets and animate the space, but also provided all small budget to each university to come up with their own ideas for transforming the space. The University of Toronto got architecture students to design a stencil for the pavement — a big blue oak leaf that reflects the University’s logo. It also got the brilliant idea to buy some astroturf and lay it down in sections of the street, which really helps to define and soften the space. On the Huron end of the block, it added basketball hoops. And, of course, the whole area is provided with free Wi-Fi.

The astroturf will be rolled up when winter comes around. Originally, the University wanted to put in an ice rink, but it turns out that there are buildings and utilities under the road that keep it too warm. An alternative might be to use one of the recently developed synthetic ice surfaces (I saw one in action this summer, with kids successfully using their ice skates on it).

The Willcocks experiment has been very successful — it is well located, at a crossroads of many routes across campus, right beside heavily used classroom buildings and a student food court, and near residences and the athletic centre. U of T has a very large population of non-resident students and a lack of space for them to spend time in while on campus, so it satisfies a definite need. 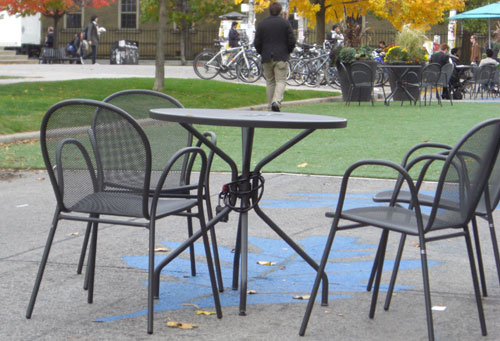 The tables and chairs have not been damaged or stolen (the tables are all provided with a chain with which they are locked to the chairs every night) — the only problem has been people pushing over the planters at night. 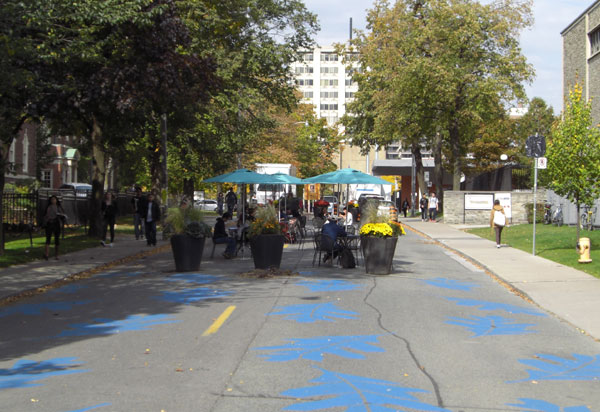 The advantage of using this pilot project model can be seen in the case of Devonshire Place (above). The University of Toronto was keen to also close down this stretch of road, which is not heavily used by cars. However, the newly pedestrian space did not end up being as heavily used as Willcocks — it is a little more out of the way. Thanks to the inexpensive, flexible implementation, it was easy to adjust to this outcome. The City left it up during the nicer part of the Fall, but decided to close the project for the winter. On Friday (Oct. 18), the City removed the planters and chairs (which can be re-used elsewhere), and the street was once again open to traffic. The partners plan to re-think the project in this part of campus over the winter and try something different in the spring. One possibility might be to use part of the street parking space for other purposes — for one thing, bike parking is very much needed in the area (as can be seen by the number of bikes locked to the Munk Centre fence). 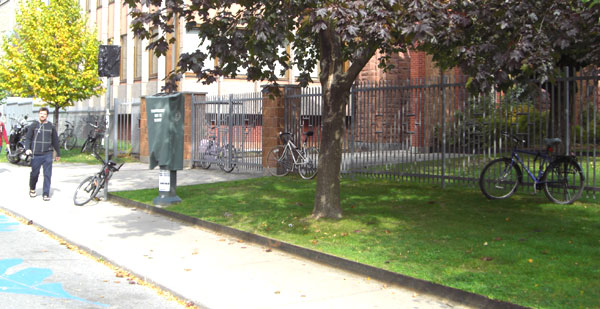 The Willcocks Street closure is slated to last a full year. The City plans to hire an independent organization to assess its success over the year, and if it proves to be successful, there will be an opportunity to make the installation more permanent (as happened with Times Square).