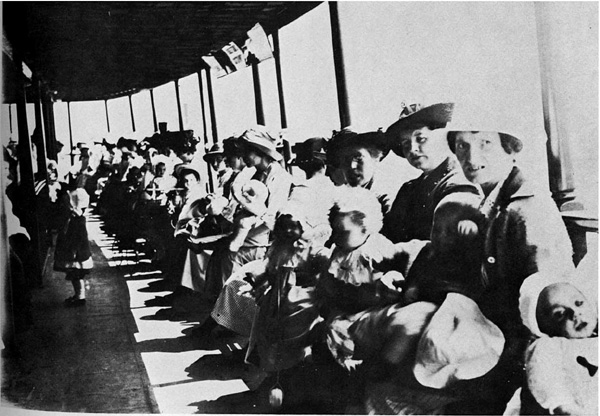 This is the first of some posts for Spacing Toronto exploring the Toronto Islands as the potent place that they are to our city. New posts will go up on Sundays  and will discuss how Toronto and the Island have shaped each other in imagination, in reality, across time, place, and space.

The Island, to many Torontonians who live on the mainland, has always been an idyllic place to spend a warm day. When we were children, we went (ecstatically) on the ferry to what seemed to be interchangeably called Centre Island or Centreville or maybe we picnicked and played on the beach instead. When we were older, perhaps in high school, we might take the ferry to an “Island Jam” or dare each other to go to the infamous Hanlan’s Point clothing optional beach. Of course, having a friend or relative who lives on the Island in one of Ward’s or Algonquin’s beautiful cottages is coveted at any age (need I mention the nearly 40-year waiting list for leases?).

Whatever your connection, the Island holds a special place in many peoples’ mental maps of Toronto — this makes sense since it is a place influenced and shaped by Toronto itself as much (if not more) as it has been shaped by natural forces. At one time or another everyone has had a stake in what happens to the Island. If you’re looking at it from the downtown waterfront it defines the southern horizon; the place contains one side of Toronto’s geographical and psychic focus by separating the harbour from the rest of Lake Ontario. Few places have the symbolic value which this place has and knowing this it is less surprising to think of the political potency that history has given it. The place where so many love to be has made and broken many political careers (most recently playing a significant role in the 2003 city election).

While trying to figure out what exactly makes the Island the hotspot that it is to Toronto’s collective imagination, I stumbled upon Sally Gibson’s More than an Island, the most in-depth and detailed book around on the history of the Toronto Islands. In the book, Gibson has highlighted Toronto’s interpretation of the Island being a point of slippage between real geography and our community’s psychogeography:

As early as 1806, a floating bridge was precariously stretched over the Don “to accommodate the inhabitants of the town in a walk or a ride to the Island” as residents of York frequently referred to the Peninsula in defiance of geography if not of psychology. (The sandbar may have been physically a peninsula, but its remoteness and relative inaccessibility made it mentally an island.)

The place was still a peninsular sandspit up until 1858, but Torontonians have called it the Island since the early 1800s. What does this strange change — a misnomer staying the same, while reality alters to match an imaginary shape – say about how Toronto has seen this part of itself that has always been a bit apart?

How did the land that would become the Island come to be in the first place? The sandy peninsula that sheltered what would become Toronto’s harbour from the rest of the lake was made largely of sediment washed from the base of the Scarborough Bluffs. The particles were pushed westward and scattered and clumped together at various points on the lake-bed as currents changed in Lake Ontario over the millennia. Modern consensus seems to be that the Niagara River is the ultimate source of these currents, creating the long sandspit with a “spur” at its end and carving the irregular shoreline on the north-facing side of the spur. 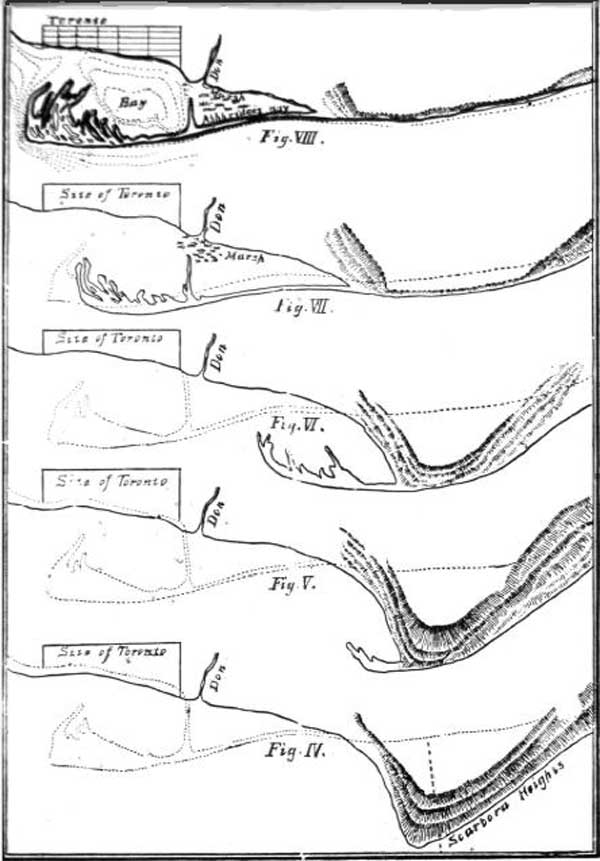 In 1890, a citizen of Toronto by the name of L.J. Clark gave a talk to the Canadian Institute on “The formation of the Toronto Peninsula”. He demonstrated the millennia-long process with what appears to be a diagram in his own hand — mighty handy for us now (Toronto Public Library).

The peninsula was valued by communities for its closeness to the open water and its pleasant remoteness for several hundred years. The Mississaugas used it as a place of healing during times of sickness since before the arrival of the French and British colonists, and to later European explorers and Coureurs de Bois the peninsula had always presented a convenient stopping point on trips West along the great lakes. It was also largely the natural harbour created by the sandspit and its massed spur that made John Graves Simcoe decide to locate Fort York and its surrounding town where he did.

With this in mind it seems fair to say that from the very beginning, the Island was important to what the community that would become Toronto imagined itself to be. Gibson hints at the idea that the Island was and is a great reminder of the power that accessibility (or lack thereof) can have upon peoples’ interpretation of their surroundings. What is even more incredible is that over time the Island has been shaped into what the majority of locals had called it in the first place, its reality changing bit by bit to come into step with our collective imagination. Some of these transformations have been more noticeable than others, such as the actual separation of the spur from the rest of the peninsula or the vacillations in planners’ implemented ideas for the Island, between the fully urban and densely populated part of the city and a remote and separate escape from urbanity, a purely recreational space. One of the only certainties about the Island is that the place that has gone through remarkable physical and imaginary transformations will continue to evolve with, and in spite of, Toronto. Sundays on the Island will hopefully bring us closer to understanding the importance of those changes in the past and for the future. 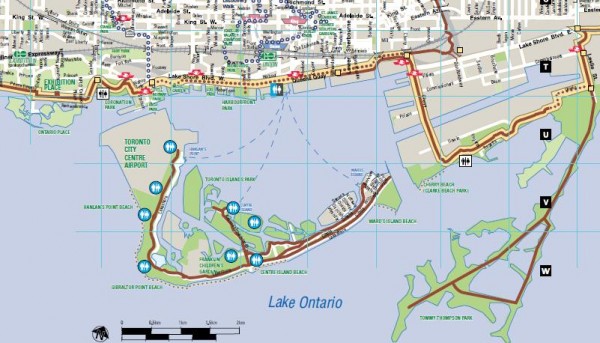 Next Sunday on the Island, how the Island became a real island – and how Toronto helped it on its way.