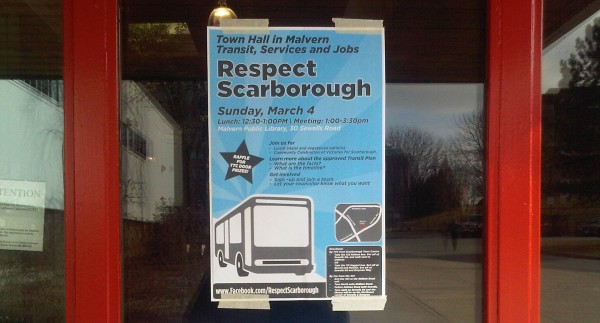 When Toronto city council convened in July, 2013, to make a clear decision on the Scarborough subway conversion, City staff provided an estimate on the cost: $2.3 billion, as outlined in a PDF document. Three months later, Toronto council approved, by a vote of 24-20, a phased-in property tax increase that will raise $910 million over 30 years — a figure, its proponents claimed, that represented the final piece of the Scarborough subway funding puzzle.

By that point, the Ontario government had diverted $1.48 billion (2010 dollars) from the original Scarborough RT conversion funding envelope (about $350 million was transferred from the initial $1.8 billion Scarborough LRT budget to the Eglinton Crosstown project). And the federal Conservatives, responding to a direct appeal from Mayor Rob Ford, anted up another $660 million.

All in, the City has $3.05 billion in dedicated funds (2014 dollars), less the $85 million it owes to Metrolinx for sunk costs associated with the previous work done on the Scarborough LRT. At over $400 million per kilometre, the three-stop Scarborough line will be almost 33% more expensive than the Spadina extension (set to open in 2016), which is a kilometre longer and has twice as many stations.

But is that enormous sum even enough to build the Scarborough subway? Moreover, did council — and Queen’s Park — make this momentous decision with a full understanding of the costs?

But that $925 million may have been a low-ball estimate. Spacing obtained a May, 2013, “business case analysis,” prepared by John Howe, Metrolinx’s vice-president for investment strategy and sent to two senior provincial officials, Carol Layton and David Black, on June 28, 2013. It suggests the $3 billion overall subway cost estimate may fall hundreds of millions of dollars short of the mark. (Howe oversaw the Metrolinx effort to find new revenue tools to fund The Big Move.)

In other words, since the subway plans are very preliminary, the amount by which its costs might exceed the current estimate is much higher than for the well-developed LRT plans. That means that, once all the real-world expenses are tallied up, the subway could end up costing as much as $3.3 billion. According to the briefing note, that number doesn’t even include a range of other expenses, nor does it account for the fact that the original allocations are given in 2011 dollars.

Howe’s memo also outlined a range of other concerns relating to capital costs, operating implications and construction risk. Written well before council and the province hammered out a deal, this document is the clearest articulation of Metrolinx’s reservations about the proposed change in direction.

What’s more, the fact that these concerns were communicated to senior provincial officials in late June. 2013 indicates that Murray’s office would have — or should have — known about the financial analysis. There’s nothing on the record to indicate, however, that Murray publicly discussed the total possible cost, much of which would be born by Toronto taxpayers.

In addition to the costs issue, the Metrolinx memo addressed the problem of expected ridership. The travel forecast for 2031 on the Scarborough RT corridor shows a “maximum flow” of approximately 11,000 passengers per peak direction per hour. That figure IS not even half of a subway’s capacity (25,000 passengers), and less than the LRT capacity of 15,000 passengers. “It is therefore concluded that the additional capacity of subway technology is not required and does not add value to the scheme,” the memo stated. “This initial assessment suggests the volume of benefit likely required to justify the switch to subway construction will not be generated and the switch would not represent good value for money.

“While further analysis could create a more definitive statement,” the memo continued, “preliminary analysis indicates that the subway scheme will not represent a good use of public investment dollars….”

The Metrolinx memo also had warnings about the risk of further delay — as much as six years — given the current state of the Scarborough RT. “The SRT is considered life expired by the TTC who [sic] describe the state of the infrastructure and the vehicles as ‘approaching critical.’ It may therefore be necessary to provide bus replacement service for the SRT during all or part of this six year period.”

On the question of connecting transit investment to planning goals, the Metrolinx memo observes that new subway stations on the Scarborough line at Sheppard and McCowan, and Lawrence and McCowan “provide little or no opportunity to intensify land use in the vicinity of these stations, negating the potential to support provincial TOD [transit-oriented development] policies and to create growth nodes around these major transit interchange facilities.”

“At this stage,” the Metrolinx memo warned MTO, “no further work to quantify or monetize these issues has been undertaken.”

As it turns out, these potential concerns excluded one other key element.

Part 4 on Monday: Won’t somebody think of Bombardier?