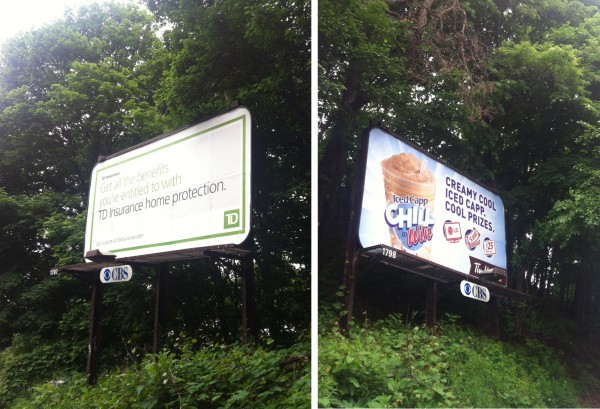 Five weeks ago, I wrote the first installment of this saga which I described at the time as a “shocking tale of procedural inertia, bureaucratic confusion, and a broken democracy.”

I have some updates to share on this story, updates that provide a glimmer of hope while at the same time illustrating how deep the systemic problems at City Hall are.

I’ll get the good news out of the way first: The city’s Sign Unit has agreed to “re-open the investigation” into these signs. City staff are actively exploring whether the billboards are legal or not, and they are helping guide me through the entire process.

In the first post, I talked about how the city had originally asked the billboard company to remove the signs in 2006, but then later reversed their position based on “new information”. I have formally asked City Staff to explain what the “new information” is but sadly, I have been told that the information is simply not available. I think it’s stunning that during an era of increasing awareness about open data and government transparency, these billboard companies are still able to operate behind a veil of secrecy. The signs affect public space, they are regulated by municipal code, and staff have admitted – on multiple occasions – that these billboards do not seem to have any permits. I can’t imagine why the “new information” shouldn’t be accessible to the public.

While I have not been told officially what the “new information” is, I’ve been able to piece together my own theory, based on suggestions from a few people. Here’s how it works: The City tells a billboard company that they have an illegal sign, and that it needs to be removed. The company’s response goes something like this: “This sign has been here for over a hundred years, since before bylaws even existed. Therefore, it was a legal sign at the time of construction, and you have to let us keep it. Otherwise, we’ll sue you.” These threats seem to be quite effective, since their validity is hard to prove.

So what can we do, as public space advocates, to counter these tactics? The answer is simple: we need to prove that the signs are actually younger than the city is being told. So here’s what I’ve done for this particular location:

a) I spent some time at the Toronto Archives with my buddy Rami Tabello. We looked at aerial photographs of the area, going back in time, year by year. We discovered that while there have indeed been billboards there for a very long time, the current structures were only built in 1963. Before that, there was a single billboard in that location, rather than two. 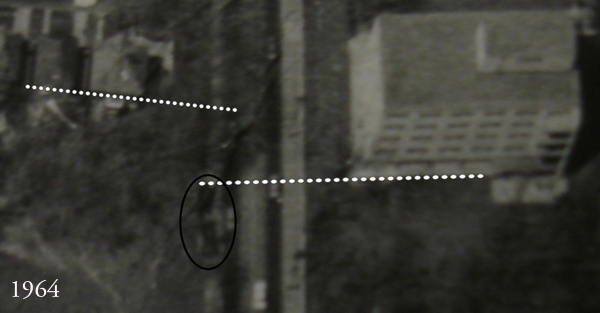 b) When I showed the photographs to City staff, they said that the discrepancy in the photos was quite clear to them, but might not be strong enough to be used as legal evidence. The photos are taken at different angles and there are some shadows. They suggested that I would need to find further evidence that clearly showed a single billboard in that location. So I asked around for advice, and Chris Bateman found this amazing picture from 1953:

3) Where is the Billboard registry?

Here’s the real question: Why does a citizen have to do all this work, to ensure that a private company is in compliance with a municipal bylaw? Let’s compare this to other scenarios. The city has the DineSafe program, where each and every restaurant is inspected to see if they are clean and compliant with existing bylaws. Each premise is then given a colour code: green, yellow and red. The colour code is clearly posted in a visible location at the restaurant entrance, and also on the Open Data website.

Or how about license plates? Every car has to be licensed and the plate is clearly attached to the car. Hot dog vendors, home renovators and TTC buskers all have to visibly show their permits, so members of the public are informed and aware.

I have been told that the city has completed a comprehensive audit of all existing billboards. They know which ones have permits and which ones seem to not have permits. So why isn’t this information available?

City staff could do two things. First, they could make all of this information available online. Any citizen could check the map and see if a billboard had permits or not. Second, they could require that all billboards display a visible permit tag. If the city isn’t sure about compliance, they could use the same colour codes as DineSafe: Green, Yellow, Red.

It’s important for me to point out here that city staff have almost no budget whatsoever for pro-active enforcement of the sign bylaw. They used to, but it was cut from their budget under this current City Council. So what does that mean? It means that city staff will only investigate an illegal billboard if someone from the public complains about it. But, at the same time, they are withholding all the relevant information that a citizen would need, to know if the billboard was legal or not!

I have sent a formal request to the city, asking them to disclose any data they have about billboard bylaw compliance. They haven’t responded yet.

As for the two billboards poking out of the woods on Bathurst Street, City staff have been very helpful so far. They’ve sent an investigator to the Toronto Archives to confirm the authenticity of the aerial photos that I’ve provided. And they are talking to other city staff, including their legal department, about the possibility of sending another “Notice of Violation” to the billboard company (eight years after the first Notice was sent).

Hopefully these signs will come down soon. I have little doubt that they are indeed illegal, and have never had any permits.

But it shouldn’t take this much effort, from a volunteer citizen, to ensure that the city’s own bylaws are being upheld. These larger issues have to be addressed:

• Why is there no public registry of billboards, including information about bylaw compliance?

• Why is the Sign Unit being under-funded, removing their ability to do pro-active enforcement?

• Why is there a veil of secrecy around billboard enforcement? Citizens have a right to know how their public space is being used or abused, and why.