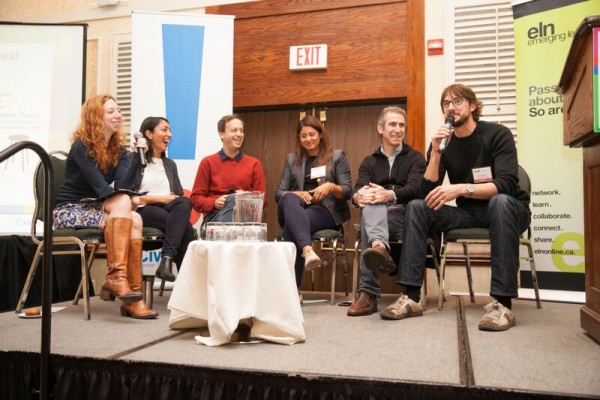 It was great to see 200 talented young people in their twenties and thirties gathered together to talk about public space. Earlier this month, I was invited to attend Civic Action‘s Emerging Leaders Network (ELN) annual studio. Civic Action had polled their network about what subject they’d like to focus on, and the overwhelming answer had been public space.

Before breaking out into working groups to discuss specific topics, the group listened to a panel discussion that brought together local leaders on public space issues from different constituencies. Moderator Hamutal Dotan (formerly editor of Torontoist and now editor of the Globe and Mail‘s Focus section) at one point did a lightning round, asking each panelist to answer in 20 seconds how to make public space better.

During the discussion, Jason Thorne, as a city manager, talked about the need to rethink how city staff approach public space issues. The question staff should ask when presented with a proposal is, “does this make the city better?” If it does, they should find a way to make it happen. He gave the example of urban agriculture, which Hamilton formerly banned but has now moved to allow. It’s an attitude that contrasts with, for example, City of Toronto’s staff resistance to allowing painting on local streets.

Dave Meslin talked about how citizen “apathy” can be induced by institutions themselves. He noted that, if one talks to people outside the “activist bubble,” while they may seem cynical and disconnected at first, if you dig down they will often care deeply and have a lot of ideas about civic issues, they just don’t see a path to how they can get involved. Jason Thorne added that, while cities do have consultations, they are on the institution’s terms, not the community’s. Denise Pinto noted that Jane’s Walk can work as a kind of gateway drug to getting involved, and that understanding one has the power to make change is a big leap of faith. What’s vital, added Meslin, is a sense of collective ownership, because people invest in what they feel belongs to them. For public space to thrive, we need to find ways for citizens to think of it as their space, not somebody else’s problem.