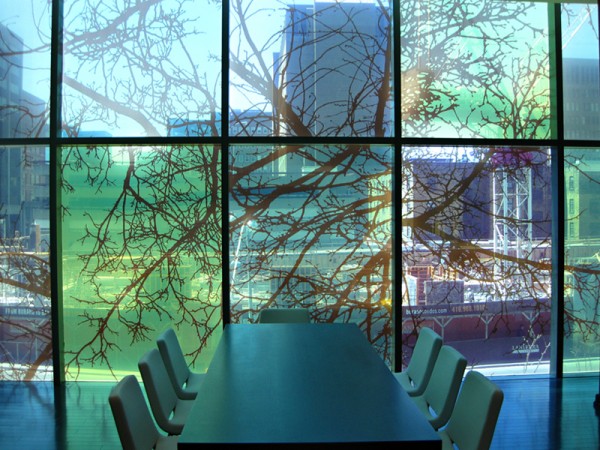 Barbara Astman is a Canadian artist who lives and works in Toronto and specializes in photography and new media. Her artworks are in both public and private collections. She is a member of the Royal Canadian Academy of Arts and a Professor at OCAD University. She is represented by Corkin Gallery in Toronto. Her studio practice is complemented by public art and commissioned works including works for the Calgary Winter Olympics, the new Canadian Embassy in Berlin, and more recently for the Murano Development on Bay Street. She served on the Toronto Public Art Commission and regularly sits on Public Art juries.

We met with Barbara at her art studio to talk about her public art practice, the role of public art for the city, and recent trends she sees in the world of public art.

Melanie Fasche: What motivates you to create public art?

Barbara Astman: The first public art you ever do is motivated because you probably need a job. There are very few ways that artists can earn a living outside of teaching, going with commercial galleries, and selling your artwork. I know some artists are really going to poo-poo my answer, but part of my motivation was, “How do I survive as a working artist?” and once I started doing it, I came to understand that these are really interesting challenges that can help me grow and learn how to collaborate with people.

MF: How does your public art practice differ from your studio practice?

BA: It is client-based. It’s not something you’re creating in your studio. What I do here [in the studio] is so private, I don’t think about my audience. I think my art dealer would like if I thought about my audience, but I don’t. When you’re doing public art though, you need to accommodate all the developer’s needs, you need to accommodate the architect’s needs, you need to really think about what other people want and meet their needs. For me, the biggest compliment is when the architect says something very positive like, “This really worked perfectly with the building.” You’re like, “Yeah. Great. We did it”.

BA: A lot of my work has been about bringing something of nature back into the built environment. I think about the function of the building. I think about what would I want to see on this – what if I’m walking down the street? I want to be caught by surprise and go, “Wow. Look at that! That’s so great,” and feel good for a moment and then go on my way. I don’t feel I have to startle people or grab them, you know? I just want the piece to be there with the building, and that is why I like windows. Murano [for example] is very much about the trees and the beautiful colors, and if you stand inside those trees and those colors [they] wash right over you. It’s not something added or stuck on the building. I’m not at all interested in decorating someone’s building. I want to be part of the building. 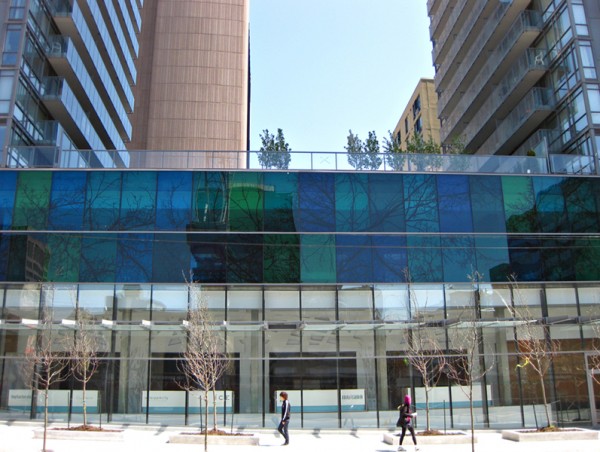 MF: What is the role of public art for the city?

BA: I think it can help Toronto with its identity. I think it would be great for the city to be known for its immense amount of public art. We have a huge amount of public art. Some of it is not great and some of it is great. You have no control over that. It is such a large, complex discussion with the developer, the architect, the art consultant, and the artist. It is very, very hard sometimes to do exactly what you think you want to do. But I see it as part of a cultural identity for a city and I think that is a really important for a city.

MF: What more could the city do to support public art?

BA: I think they do a lot right now. The Percent For Public Art I think is amazing. My friends in the States are amazed that we have this. Maybe promote a mentorship program for younger artists. I think the best way for a younger artist to learn about doing public art is to be there and do it and realize that a lot of it is just hard work. I think a lot of young artists don’t realize it’s a job. So that every project that goes through the Toronto Public Art Commission has to have a younger artist be a part of the process. And have the funding for the mentorship so it is not always up to the developer, because they don’t understand why they should be doing this so maybe the City could contribute to this. This would be my main suggestion.

MF: What are your two main recent observations from sitting on Public Art juries?

BA: The level of technology involved in some of these more recent proposals is astounding. But we’re talking about projects in the millions of dollars. You have to have this whole infrastructure then to support this technology and my question on the jury is, what do we do in 10-15 years when the whole technology is so different? What’s going to happen to this artwork? And I see more international artists doing work here. Developers are opening their minds to working with international artists because the bigger the budget the more international the scope can be. Some developers who see works that are in major cities around the world are like, “Oh I want one of those,” and I go, “But we’re a different city. We’re a different culture”.

MF: Are you concerned that in the future we will see similar public artworks in major cities?

BA: It’s a little bit of a worry. Once something becomes popular everybody wants it. They feel like they have this in Berlin so we should have this here, they have this in New York so we should have this here, because I think Toronto wants to be so international, you take what is international and try to bring it here. I understand why, but you could have an important international artist bring ideas they did in Europe and transport that idea here in the context of Canadian culture. Think about the site. And use your technology but apply it to something here. This will be the role of good art consultants to make sure that everything is unique and specific for Canadian culture or Toronto culture and not something just plunked from there to here. 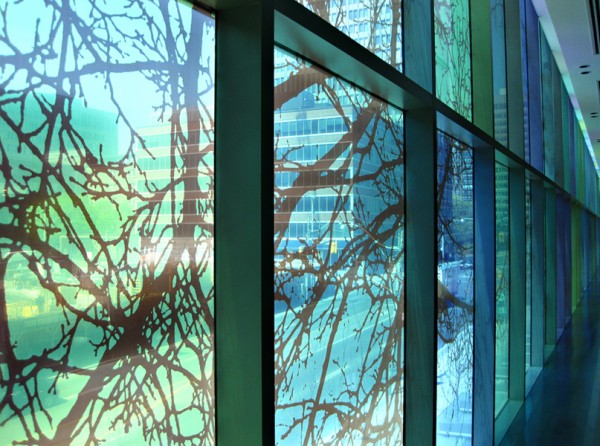 MF: Let’s come back to your public art practice. Is there a specific site you would love to develop an artwork for?

BA: Lately I’ve been really wanting to do my projects more locally. I know that might sound pretty limited because others are probably going to say, “Oh I want to do New York or LA.” I’m a transplanted American, it’s taken me a long time to understand the difference between being American and being Canadian. Now that I feel more firmly rooted in being a Canadian, I don’t think or worry about being international with my public art. I feel so rooted here that I’d like to do more work here that has to do with being here. Maybe down by the waterfront. We live on this great lake. I grew up on the other side of the lake, so the lake resonates with me. But right now is there any waterfront left? I sometimes think about ideas that might reflect the fact that we live in a city where Lake Ontario is so much a part of our urban existence.

Melanie Fasche is a Postdoctoral Fellow at the Martin Prosperity Institute at the University of Toronto. The interview has been edited and condensed. The author thanks Jessie Huang for the interview transcription.