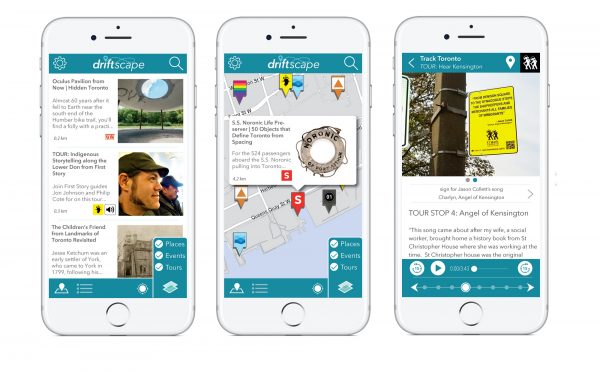 In 1796, Chief Wabakinine of the Mississaugas was murdered by British soldiers roughly at the base of Parliament Street. You can learn this fact — as well as the important backstory for this event — from an innovative new smartphone app, Driftscape, which launched recently in Toronto. The story of Chief Wabakinine was written by members of First Story, a group dedicated to telling the indigenous history of Toronto. Driftscape provides a platform for local arts, culture and history organizations like First Story to share site specific content. Currently 19 organizations have partnered with Driftscape including Queerstory, Jane’s Walk, NOW Magazine, The Toronto Dreams Project, Toronto Historical Association, Track Toronto, as well our team at Spacing.

Imagine you’re walking down Front Street, as you approach St. Lawrence Market you get a notification letting you know you’re near the site of William Davies Company’s St. Lawrence Market Stall, one of Spacing’s 50 Objects that Define Toronto. Read about its historical significance, and then keep looking to discover that you’re at the spot where Canada’s First Electric Telegraph was sent from in 1846 by the mayor of Toronto to the mayor of Hamilton. Listen to the story of how Jarvis Street got its name: Samuel Jarvis was once the Superintendent of Indian Affairs, who sold land in this area in order to repay money he had taken from the Indigenous communities he was meant to serve. For this was given the honour of having a street named after him.

The city is dense with stories and Driftscape enables you to experience them all in one place, and to seamlessly encounter them in the places where they’re most relevant. Users get to see all this content in one place and can choose to tailor what they see to suit their own interests. You can opt to view content from individual organizations, or select categories like history, curiosities, music, urbanism, to name a few.

This capacity to showcase a diversity of stories and points of view all in one place, gives Driftscape a unique ability to depict the palimpsest that makes up Toronto. While we were in early discussions with Driftscape, the app’s creator Chloe Doesburg told us that her team believes in “creating a platform where diverse stories can be shared, will inspire a greater understanding of the spaces we inhabit, and the people we share them with. We also think it’ll also make exploring your surroundings a lot of fun.”

There are currently over 700 entries on Driftscape, and that number continues to grow. Since their launch in November, they’ve already added a new content layer from the Toronto Public Library which includes the Toronto Poetry Map, as well as releasing a new audio tour by Track Toronto which focuses on music in Kensington Market. The tour features interviews with local musicians like Jason Collett, Ron Hawkins, Andrew Cash, Delta Will, Abdominal, and more.

Driftscape is currently only available for iOS, but has plans to add an Android version, and also to expand to other cities.

Visit driftscape.com to learn more and download the app