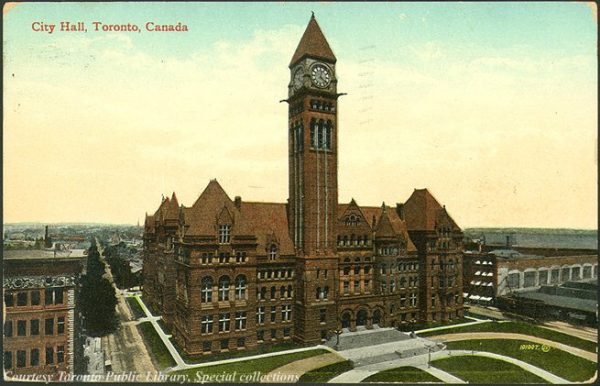 After years of deliberation and many unrealized plans, the City is finally set to establish Toronto’s first city museum. City council voted in January to approve range of recommended new uses in Old City Hall, including a Museum of Toronto. The news was greeted with much fanfare, and a sigh of relief from those concerned that Old City Hall – one of Toronto’s most cherished heritage buildings – could become a glorified shopping mall, and that the dream of a Toronto museum would once again fade away.

The City’s new direction for Old City Hall and a Museum of Toronto is surely exciting – it represents a generational opportunity to re-open this iconic building to the public and establish a major cultural institution for all of Toronto. But as City staff spend the next year refining the program, the plan deserves close consideration and significant consultation. The design, governance structure, and approach to programming and curation will make a real difference in what kind of place the Toronto Museum will become.

Recognizing this, Spacing partnered with the University of Toronto’s Urban Studies Program, the Ryerson City Building Institute, and ERA Architects to explore the issues, ask questions, and bolster public dialogue around the future Toronto Museum.

The event, The Toronto Museum: Making the Vision a Reality, took place last week at Innis Town Hall, and featured panelists Karen Carter (Myseum of Toronto), Matt Brower (U of T Museum Studies), and Luigi Ferrara (George Brown College). Responding to thoughtful questions from a full audience, the panelists dug into the next chapter of this planning process and shared their visions for a Toronto Museum. A number of key ideas emerged around next steps.

With a green light from council, the City’s going forward plan involves refining the museum program, advancing the architectural design, and developing an RFP to find a head-lessee (in a management arrangement similar to that of Union Station). It seems clear that several parallel processes related to the museum itself need to be undertaken, one of which is a proper consultation with Torontonians on what they want this new institution to be. The City and other agencies in recent years have used third party consultation firms to orchestrate such exercises, and this project would seem to be a strong candidate.

The consultation should involve all parts of the amalgamated city, and aim to engage residents in various ways – properly promoted and expansive, but not indefinite. Indeed, let’s not do this part on the cheap. As the planning department knows, consultation done well is a citizen engagement tool, not just a feedback gathering exercise. The more people who know about, and have input in, the creation of this new institution, the stronger it will be.

The panel didn’t come down really clearly on whether the Toronto Museum should be operated at an arm’s length from the City, or through a foundation that can raise funds and issue charitable tax receipts. Matt Brower argued that the museum should be free to residents, but that leaves open the question of how to cover an annual $6 million operating cost.

However, if the City proceeds with the head lessee search process without simultaneously establishing an entity that will operate the museum, important questions of design and programming will be decided by City officials or consultants hired to steer the process. The arm’s length entity that ultimately operates the museum must be established or identified as soon as possible so it can begin the process of developing a business plan, overseeing public outreach, and hiring consultants, and so on.

In response to a question about the design of the museum and Old City Hall generally, Luigi Ferrara argued in favour of an international design competition. These aren’t cheap, but there’s a case to be made for inviting architects to think about imaginative ways to use this complicated space. For many years, a small Toronto firm has been generating roughly the same version of the interior courtyard plan, but surely there are other ideas that could be explored.

It’s worth repeating that both Old City Hall and New City Hall are the products of architectural imaginations. Indeed, the City of Toronto was looking at very staid plans for a new city hall until some architecture students and noted professor Eric Arthur persuaded then-mayor Nathan Phillips to hold an international design competition.

As with both the consultation process and the governance structure, the point is to involve the broader public in this project rather than leave it hidden within the confines of the city’s real estate division.

As the City moves ahead with its plans for Old City Hall and a Toronto Museum, Spacing will continue to track the progress and interrogate the process. These key questions – regarding consultation and the degree of citizen engagement in shaping a vision for the museum, the structure and operating model for the institution itself, and the design of the museum space and of Old City Hall – warrant careful consideration. Toronto’s first museum is an exciting prospect, and it deserves to be done right.

John Lorinc is the senior editor of Spacing. You can follow him on Twitter at @JohnLorinc. Claire Nelischer, M.S.c, is a project manager at the Ryerson City Building Institute. Follow her on Twitter at @claireNeli.