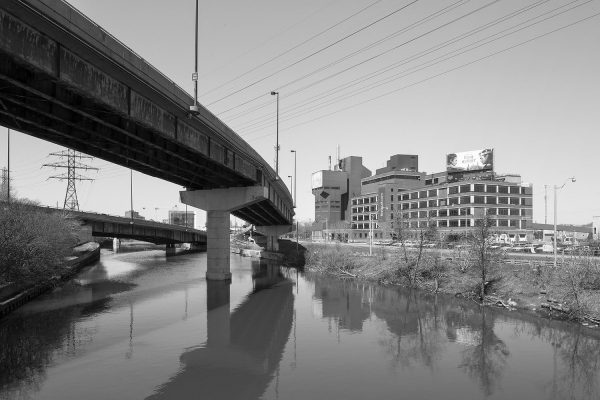 This second part of my feature on Lever Brothers soap and detergent manufacturing in the lower Don Valley will examine the eight-decade history of Plant No. 1, known as the Sunlight Soap Works within its local industrial context, before returning for a second look at the surviving Plant No. 2 through the eyes of the distinguished architectural photographer, Steven Evans.

Plant No. 1 opened in 1900 on a wedge-shaped site bordered by the Don River on the west, Eastern Avenue on the north and the curving Grand Trunk rail corridor on the southeast. The construction of the rail corridor in 1866 had been the first step in the industrialization of the area, followed by the straightening of the Don river channel in 1888 and the construction of the first Eastern Avenue bridge across the Don in 1900.

By 1900 the lower Don was already a heavily industrialized district where the air was full of noxious odours and the sun was often viewed through a haze of coal smoke. A measure of the enthusiasm generated by the appearance of the Sunlight Soap Works in this blighted neighbourhood is that its closest neighbour, the storied Toronto Baseball Ground, was promptly renamed Sunlight Park. Remarkably, although the baseball ground closed in 1913, its name lived on as a designation for the soap works itself.

The new Sunlight Soap Works received adulatory reviews in the press for being the largest soap works in North America, for its rational production process, and for its new, odourless soap-making technology, which used glycerin and vegetable oils rather than tallow (see transcripts from The Toronto Evening Star and The Montreal Gazette (PDF)).

Headlines from “A Visit to the Sunlight Soap Works, Toronto.” The Gazette, Montreal, April 5, 1902.

The architectural design of the new factory complex contributed to its favourable reception. The Sunlight works was the first project completed by the newly formed partnership of Sproatt and Rolph, whose later designs included Hart House at the University of Toronto, the Royal York Hotel and the Canada Life Building.

While the production of Sunlight bar soap in Plant No. 1 was highly automated, packaging of the bars in cardboard cases required “two rows of nimble fingered girls.” At its founding in 1885, Lever Brothers had introduced a new model for labour relations which, although paternalistic, was said to be of benefit to its mostly female workforce.

Since the electrical grid was then in its infancy, the plant generated its own power. A 250-horsepower steam engine drove a locally manufactured 125-kilowatt generator. Contemporary journalists noted approvingly that this power source allowed the company to provide its employees with hot lunches cooked by electricity.

In the early 1900s, Lever Brothers would have offered industrial workers healthier working conditions than did its immediate neighbours, which included the Consumers Gas Station B to the east, the Frankel Brothers scrap metal smelter to the north, and, directly opposite on the west bank of the Don, the Wickett and Craig Tannery and the huge William Davies pork packing plant. 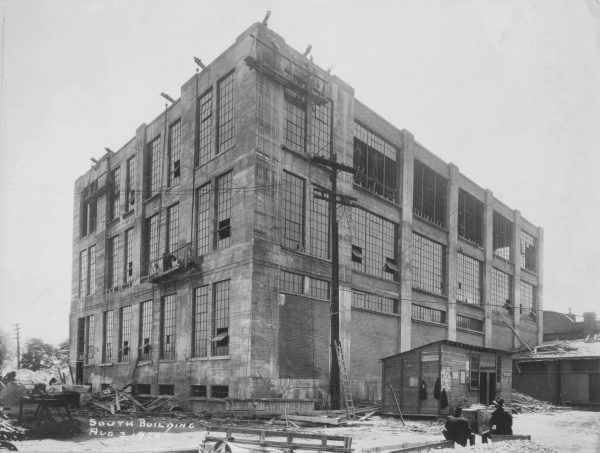 Notable early additions to the Sunlight complex included the North and South buildings of 1920, designed by the architect J. F. Sparling. Both were three-storey concrete loft building of the “daylight factory” type, featuring enormous windows. After 1950, a group of conduits that dipped under the rail viaduct allowed steam and process liquids to pass between the soap works and Plant No. 2.

By 1965, the original Sproatt and Rolph office building at Plant No. 1, with its off-centre Neo-Baroque entrance portal, had been replaced by the Lever Brothers Technical Centre, a modernist slab designed by Mathers and Haldenby whose curtain wall mimicked that of Lever House, the Company’s prestige office tower in New York. 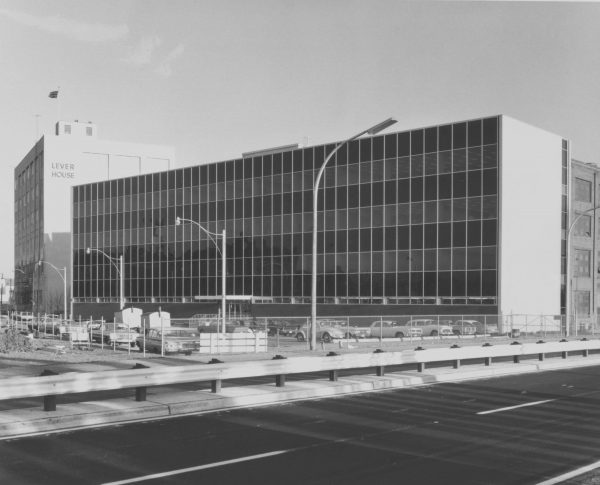 Although the original Lever Brothers plant survived until 1988, its former site is now a warren of car dealerships. In 2004, the former Technical Centre was transformed by Quadrangle Architects into a BMW showroom, attracting the attention of southbound drivers on the Don Valley Parkway.

The image sequence below includes views of early transportation infrastructure in the lower Don Valley. The most important element remains the rail corridor established in 1856 for the Grand Trunk Railroad. Between 1925 and 1934, the ground-level tracks were replaced by the waterfront viaduct that is still in use, and whose location will influence the placement of the East Harbour station on the Ontario subway line.

Not all the industries that surrounded the Sunlight soap works in the twentieth century were photographed in detail, but most appear in municipal aerial survey photos taken between 1947 and 1992. 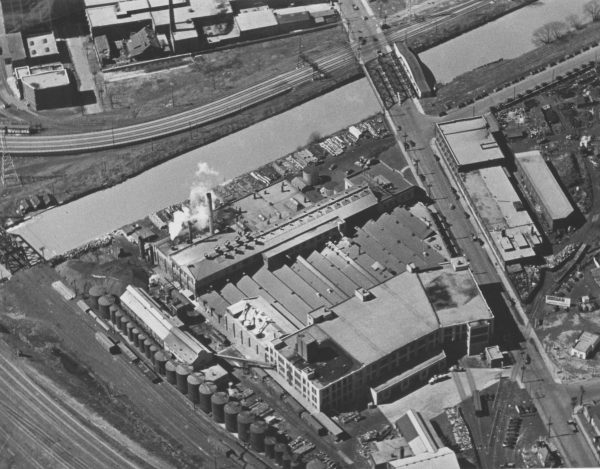 16. Aerial view of Sunlight works from southeast, ca. 1932. Lever Brothers Archives, uni-gf-cr-5-24-11, Unidentified Photographer. The new rail viaduct is visible in the lower left corner. On the left middle, the abandoned GTR rail bridge. Part of the William Davies plant appears on the upper left corner. On the top left side, the east facades of the Wickett and Craig tannery. The three-truss Eastern Avenue road bridge shown here opened in 1933 and was abandoned in 1964.

The Wickett and Craig Tannery on Cypress Street operated continuously from 1891 to 1990. Its site is now buried under the flood protection berm of the Corktown Common.

The Consumers Gas Station B manufactured gas plant opened in 1912 and closed in the mid-1950s. Three distinctive buildings from this complex have survived along Eastern Avenue, but it has also left behind 40 years worth of heavy soil contamination.

Frankel Brothers moved to the north-east corner of Eastern Avenue and Don Roadway about 1910. It supplied the structural steel for the construction of Lever Brothers Plant No. 2. Its property was expropriated in 1962 to make way for a ramp connecting the new Eastern Avenue flyover to the Don Valley Parkway.

The Lever Brothers Plant No. 2 and the nearby Hearn Generating Station were designed and built by the engineering firm of Stone and Webster, opening within a few months of each other. Although the names of the architects have not yet come to light, both structures represent the modernist factory aesthetic that was practiced by Toronto’s most prominent firms during the post-war period.

The lower Don Valley is one of the most important places in Toronto for retaining a link to our city’s often gritty industrial past by preserving historic structures and adapting them to new uses. As my colleague Steven Evans’ photos show, the surviving architecture of Lever Brothers Plant No. 2 is a powerful representation of its time and place.

Read part 1 of this feature.