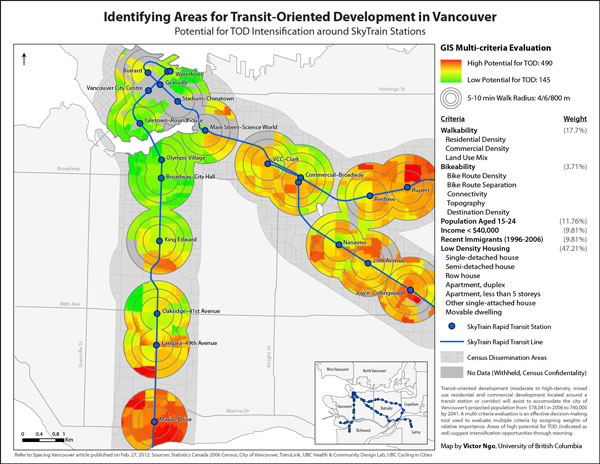 As many people may know, transit-oriented development (TOD) is emerging as a popular and influential planning idea across North American cities as a means of sustainable urban development. TOD is defined as moderate to high-density, mixed-use residential and commercial development located around a transit station or corridor. Representing the full integration of land use and transportation planning, it encourages a compact and pedestrian-oriented form where people are able to live, work and play in the same community.

Given concerns of increasing urban sprawl and high ecological footprints, pursuing TOD has proven to be an effective way of concentrating growth on brownfields while generating and attracting transit ridership to shift mode share.

In the City of Vancouver, the SkyTrain rapid transit system has shaped land use planning since its inception in 1985. While development that capitalizes on rapid transit has been successful in the downtown core, a simple ride on the train will clearly show that the stations beyond the peninsula have yet to pursue transit-oriented development to its full potential.

With Vancouver’s projected population increase from about 578,041 in 2006 to 740,000 by 2041, it seems natural to concentrate future growth along transit corridors where surrounding neighbourhoods within station catchment areas would be able to benefit from a more complete and intense mix of residential, retail, office and community.

Of course, this is often met with apprehension by the communities directly affected by such transformations. However, prioritizing densification along transit corridors can, and should, be done while preserving neighbourhood character within outlying single-family zoned districts. Successful climate change planning must consider the interest of the city at large and be contingent on the geographical circumstance.

For example, high density development in a neighbourhood such as Dunbar would be unsuccessful in the short-term as there would be no existing locational advantage of being close to rapid transit. Concentrating resources towards creating successful TODs will serve as useful precedents to deepen public acceptance of more sustainable urban forms, especially given that concerns regarding neighbourhood character preservation often run high in single-family districts.

Towards this end, a multi-criteria evaluation (MCE) was conducted to assess TOD performance in the City of Vancouver and identify potential SkyTrain station catchment areas within a proximity of 400, 600 and 800 meters that would benefit from intensifying and optimizing TOD.

The MCE method is useful to decision-making since it is able to evaluate multiple and often conflicting criteria.  Done in conjunction with the use of a Geographic Information System (GIS), it can accommodate large amounts of information and provide a structured, traceable and flexible analysis: making a multi-criteria evaluation an effective spatial decision support tool in a multi-stakeholder environment. The models created can then be used by planners, politicians and the public in determining ideal solutions to regional, city, neighbourhood and community problems.

For the purposes of my study, six criteria were selected. Four criteria were used from Statistics Canada’s 2006 Census: population aged 15 to 24, household income less than $40,000, recent immigrants from 1996 to 2006 and low density housing (primarily single-detached). The fifth criteria was walkability derived from an index developed by Larry Frank and his team at the UBC Health and Community Design Lab. Similarly, the final criteria was bikeability developed by Meghan Winters and her team at the UBC Cycling in Cities research program.

These criteria were selected to capture the social and physical dimensions of an ideal TOD.

The 15 to 24 age group represents the most likely group to travel using sustainable modes. In Canada, 35.1% of this group across all major census metropolitan areas use sustainable transportation to travel to work. In Vancouver, they represents 36.7%. Similarly, recent immigrants are more likely to use public transit, even after controlling for demographic characteristics, income, commute distance and residential distance from the city centre.

While TOD can be expensive to develop and generates a high demand and real estate value, it is very important to ensure future transit-oriented developments in Vancouver are equitable and within reach of lower income households. As such, households that have an income of less than $40,000 – an approximate threshold for Vancouver’s living wage of $18/hour – were chosen. Station catchment areas that have a higher proportion of these census groups have a higher potential for TOD intensification.

Single-detached family dwellings are characteristic of undesirable land use patterns in a transit-oriented development due to the fact that they are typically low density and unable to support a cost-effective transit ridership rate. As classified by Statistics Canada, the presence of high proportions of seven housing types are favourable for TOD intensification:

Statistics Canada’s eighth housing type, apartment – five or more storeys, was excluded as it satisfied the requirements of an ideal TOD for this study.

With this in mind, ten stations that have high TOD intensification potential were identified. These are shown in the graphic above. They are represented in the headline image above: Commercial-Broadway, Nanaimo, 29th Avenue, Joyce-Collingwood (Expo Line), VCC-Clark, Renfrew, Rupert (Millenium Line), Oakridge-41st Avenue, Langara-49th Avenue, and Marine Drive (Canada Line). While the results align with expectations, they are useful as a visual and quantitative assessment of TOD performance in Vancouver and may validate controversial community plans.

For Expo Line stations, given that Nanaimo and 29th Avenue opened in 1985, much can be done in this area to encourage TOD such as incremental rezoning from single-family to multiple residential dwelling and commercial over time. These stations catchment areas are more characteristic of transit-adjacent development — conventional automobile-oriented development located near transit stations.

The station that had the highest potential was Marine Drive near the border between Vancouver and Richmond. Consequently, the City recently passed the Cambie Corridor Plan in early 2011 that includes a coordinated planning strategy for the entire corridor. According to the City, it will “integrate development with transit along and around the Canada Line to support the City’s goals of environmental sustainability, livability and affordability. [It will] emphasize walking and cycling trips, especially those integrated with transit.” The plan presents a valuable opportunity to optimize the new Canada Line stations for TOD.

As one can see, Geographic Information Systems are a useful tool in guiding planning and policy decisions shaping long-term land use and transportation. Offering transparency in analyses conducted by local governments may lend support from the public and assist in making evidence-based planning decisions. Implementing public participation GIS can also improve the public process, with potential for increased community participation.

Local knowledge is just as vital in shaping communities and GIS can be adopted for community use as a form of community empowerment. However, its specialized nature is a major barrier. As a word of caution, these results are an ideal reality and it is important to realize using GIS only constitutes one aspect of planning for people.

Victor Ngo is an undergraduate student studying Geography and Urban Studies at the University of British Columbia. This article was the result of a final project for an advanced GIS class. The full academic paper will be appearing in Trail Six, UBC Geography’s peer-reviewed journal and will be presented at the 2012 Annual Meeting for the Western Division, Canadian Association of Geographers in Kelowna this March.