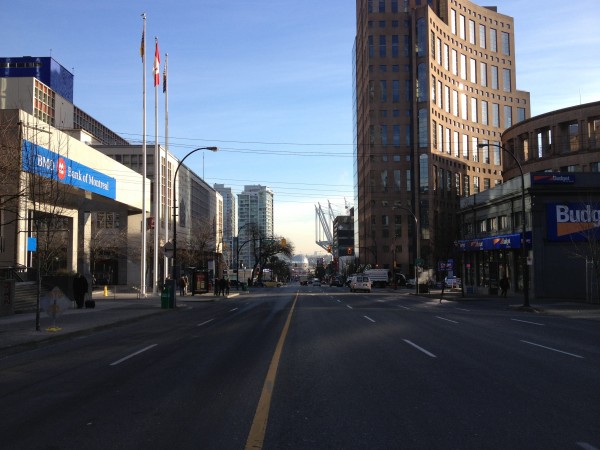 [Editor’s Note: Schools are the repository of ideas and experimentation. All too frequently, however, interesting and provocative work remains hidden from public view. Nowhere is this more true than in schools of design and urbanism. During the Spring semester of 2013, the 4th Year Environmental Design students at the University of British Columbia’s School of Architecture and Landscape Architecture undertook an in-depth study and design exercise focused on Vancouver’s West End. Studies on the West End is an ongoing series that looks at the diversity of work related to that studio. Enjoy!]

West Georgia street is the West End’s designated northern boundary. In our studies of the street’s patterns and identities, we realized that Georgia does not so much relate to the West End specifically, but instead acts like an urban folly contrasting the intimate neighbourhood to its south.

Georgia is to the West End as monuments are to houses.

Via del Corso, Roma. Champs Elysees, Paris. The Washington Mall. Bay Street, Toronto. Major cities are characterized by a diverse urban fabric, part of which includes a monumental and ceremonial axis. These axes serve as positories of history. They act as sites for speculation of monumental sums of money, tall things, things that assert power, dominance, control, force-fed idea of globally perceived identity.

By nature of being adjacent to the West End, Georgia provides an architectural and urban foil for the “preview of heaven” that Douglas Coupland has lovingly labelled the West End. Their patterns in material, scale, and experience differ greatly. As Cecil Balmond would say, agitation by proximity.

Georgia street is a construct of transportation.

Georgia is a freeway without stilts. Since the foundation of Vancouver’s “original” city grid and plans, Georgia has been labelled, along with Burrard, as one of the two main automobile thoroughfares through the downtown core. On every map for every city plan of Vancouver, there they are, bigger, bolder, and longer than the rest of the streets. As the widest streets with the fastest speed limits and widest sidewalks, their planned/unplanned location along subway lines feed a wealth of pedestrian circulation along Burrard, people going to work, and on Granville, where people pursue commercial activities and can disperse to the more public facilities along Georgia.

Their connection to the Lion’s Gate Bridge on the north and Burrard Bridge on the south, bring car and bike commuters from the Lower Mainland and North Vancouver to and through the city. Georgia is our freeway on ground level, and once the viaduct is gone, won’t even have an “American City of Tomorrow” terminus to the West.

Georgia is a Gateway.

Beyond transportation adjacencies, Georgia is also the seam that stitches together Coal Harbour to the North and the West End to the South, runs directly through the Central Business District, and dumps you out into historical Chinatown over the viaduct. A simple trip down the running stitch gives you a glimpse into Vancouver’s developmental history from industrial flats to Expo mania to the city of glass.

Georgia is a construct of the mind.

Georgia begins and ends with two imagined sight lines: if you extend it’s length on a map, it connects the fountain in Stanley Park’s Lost Lagoon with Science World, a remnant of Expo ’86. Along the way, one is pulled towards the water as views of Jack Poole Plaza and the new Convention Centre lure you with their shiny asymmetry framed by the descent to the water.

It feels like Vancouverites never make the conscious and forthright decision to walk down Georgia for Georgia’s sake. It is our most monumental example of a metropolitan condition: skyscrapers, dark shadows, big names, yet we only experience it in fragments. The prolific Georgia street address continues to be where the new Telus building, Arthur Erickson building, and proposed redevelopment site for the Vancouver Art Gallery exist.

Interlude: the lost tourist in her own city.

A self-proclaimed Vancouverite goes for a walk down the entire length of Georgia street for the first time. Her internal dialogue is trying to piece together the remainder of the city.

The Library? I think it looks like the Coliseum, no? Well I’ve been to the Coliseum and I think it does. I once walked into the library on Georgia and got spit out onto Robson street. It remains one of the only rare times I have ever lost my sense of direction… anywhere. QE Theatre? I went there for a concert once. I took the Canada Line. Feels like every time I get off at city centre station or off a bus on the corner of Granville and Georgia I feel compelled to cross the street for no apparent reason other than throes of people are doing it. Pacific Centre? Well I can get there from the Canada Line without seeing daylight, not that there is much here in Vancouver. Plus it has all the same stores as Robson Street anyway, and that’s more fun to walk down. The Art Gallery? I thought the doors facing Georgia street didn’t open? Right, the cafe overlooks Robson and the red carpet is on Hornby. Shangri La? Tallest building in Vancouver? Really? Have you seen that cool building that looks like a floating cube? Oh, and also that Peter Cardew Crown Life building. Yeah, the Georgia Banks. My architecture prof won’t stop talking about it. He loves big pieces of glass. Macmillan Bloedel? Oh, you mean that one that looks like Buchanan Tower at UBC. Yeah I saw it when walking along the waterfront to Stanley Park. You mean to say it is on Georgia too? And what about Stanley Park… that forest that Vancouverites feel belong to us but nobody really fully understands? Why would I cross seven lanes of highway to get there when I can walk along the water the entire time? Also by the way where is Lost Lagoon I’ve lived here for two years and haven’t found it? And where is all the cheap ethnic food? I’m hungry from all this walking.

Georgia is having an identity crisis… or is it?

Maybe, like Vancouver in movie credits, Georgia just needs more publicity. It is actually quite a beautiful street to walk down, albeit tiring and a little overwhelming, dark, and cold. The architectural gems along the street are arguably the only things Vancouver has when it comes to big ballsy design. But like Vancouver, Georgia is beautiful and afraid of calling attention to itself. At least the attention it deserves. Where is the quirkiness? Where is the Experience Music Project; the Royal Ontario Museum jutting into the street? Has Georgia ever.. made any mistakes? Well that’s when I realized that maybe…

and the call for taller zoning of buildings to meet “exemplary architecture” requirements is a step in the right direction. A more invigorating attempt at a ceremonial pedestrian experience, such as the Shangri-La block, beyond wider sidewalks and setbacks could also be a step towards a more exciting experience of Georgia that can evoke a sense of pride in what our city really is—in Vancouverites and tourists, alike.

Other Studies on the West End:

Shelley Long is a Calgary native-turned-Vancouverite and recent graduate of UBC’s Bachelor of Environmental Design program.