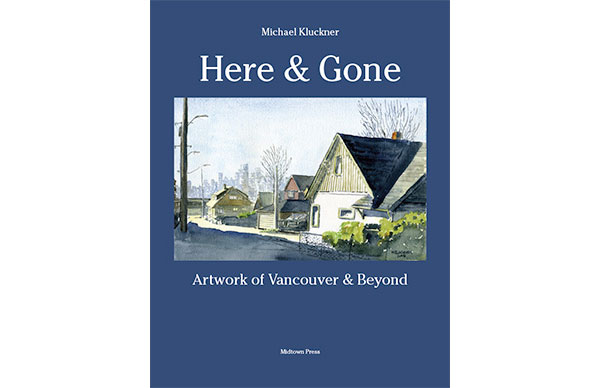 I could not have imagined Vancouver becoming such a city of contrasts even 30 or so years ago when I was writing the original Vanishing Vancouver book. Certainly, it was in its buildings – the West End had already become a concrete forest when I was a teenager, a forest that became glassy and strata-titled as it expanded through the downtown peninsula in the 1990s. But the city still seemed to be a middle-class kind of place, a yin and yang town of towers and apartments for some and wooden houses for others. To a large extent, it reflected the choices available all across urban Canada.

With local Vancouver artist Michael Kluckner making the city he was born and raised in the subject and muse of his art over the years, this new collection of his work from the past decade takes a different tone than his previous books. The author of Vanishing Vancouver here offers a more nostalgic, romantic visual narrative of disappearing Vancouver streets, this time with less of an edge from his previous publications. Here and gone – figuratively and literally – means both buildings that have been demolished and his artistic production from both Vancouver and places he’s traveled.

The book is also up to the minute, including how Covid has personally impacted him, showing recent depictions of the Downtown Eastside, including one image of the Sunrise Market near the now-closed tent city in Oppenheimer Park. At the midway point of this 80-page book, Michael marvels at how he used to take for granted the ability to travel at the drop of a hat, deliberately publishing his book during Covid as a panacea to our paralyzed tourist industry. As such, the first half of the book is devoted to the mostly unknown and unseen corners of Vancouver, with the latter half of the book showing places to which he’s traveled, including the Mediterranean, Southeast Asia, and Australia.

Breathtaking watercolours of rice paddies in Bali are presented alongside vignettes of sleepy Vancouver streets, providing a wonderful juxtaposition of places we can actually travel to locally—i.e. in Vancouver proper—along with places currently out of reach. And as always, Michael’s hand and eye capture the exquisite details of our daily existence, whether a bottle lady in Vancouver’s Downtown Eastside, or a bus stop with people staring at their phones.

The text Kluckner provides to accompany his visuals is as always top-notch, mixing cutting social commentary on the current housing crisis while reminiscing on long-forgotten nooks and crannies of his home town—including in the book’s opening pages a watercolour painting of a forgotten structure in the back corner of the VanDusen Gardens, one among many gems in the book that will make it comfortably familiar to Vancouver readers.

And as always, many of the houses he has painted and included in the ‘Here’ section of the book are themselves endangered species, most likely to be bulldozed in the not-too-distant future, and the subjects of his previous books. In one instance, he remarks how one painting he did of a vacant 1949 house in Vancouver’s West Side has since burned to the ground.

The ‘Here’ section of the book also includes several wonderful black-and-white cartoon sketches on Vancouver’s neighbourhood character, interspersed with longer written essays which include a lament for the loss of Mom and Pop corner grocery stores, with another recalling the connection that once existed between Vancouver’s port and its street life.

Kluckner has artfully captured what it means to be ‘here’ in Vancouver, including a painting of the wonderful cherry blossoms we get each spring, while another painting captures the special quality of light one witnesses along Vancouver’s beaches in the summer—from English Bay and Kitsilano beach to the Spanish Banks—in the moment just before the sunset.

One highlight of the book is a two-page painting, depicting a view looking north from the foot of Trafalgar Street. With its breathtaking vista of the North Shore mountains, it is an astounding vantage point, and as Michael explains it, the quality of light that day was so magnificent it prompted him to do a second painting, such that he was able to capture the full feel of the neighbourhood character—including a 1908 house adjacent to a massive Douglas Fir it shares its property with.

Noting how Trafalgar Street was the western edge of the 5,800 acres granted to the Canadian Pacific Railway at the time of the city’s founding, he points out how, for a time, it seemed the city’s urban bulk would indeed reach this far corner, recalling how towers were built nearby in the 1960s. With future plans for more towers quashed by local residents in the ’70s, the area has remained for the most part untouched.

The old house next to the giant Douglas Fir was once home to Captain Cates, famous for turning Bowen Island into a tourist mecca, and Kluckner is not optimistic that the old house will survive, despite its heritage value, given that it takes up the equivalent of three city lots.

In much the same spirit as landscape architect Laurie Olin’s recently published Paris Sketchbooks, Michael Kluckner’s new book is the perfect escape to far off places that we need right now, while providing new and surprising stories about Vancouver’s local history.

A must-have for the library of artists, architects, planners, as well as Vancouver residents, both new and old alike, Here & Gone is a welcome addition to the work the author has produced over the years—a loving portrayal of the details of the author/artist’s home town, this time around including places far from home as a Covid counterpoint.