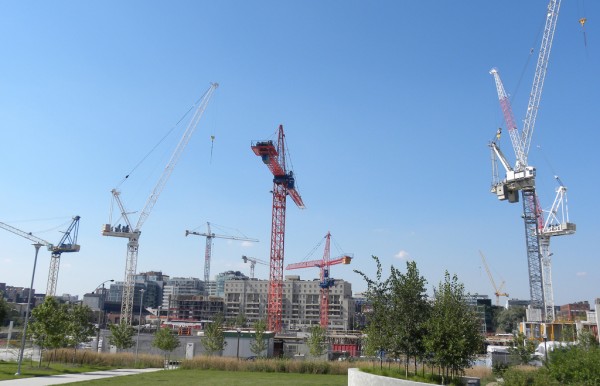 At its final meeting of the fractious 2010-2014 term, City Council gave its blessing to what will become one of the few new parks to be built in recent years in the high-density corridors of the downtown. After years of fraught and often frustrating negotiations, Toronto Centre councillor Kristyn Wong-Tam persuaded Lanterra, the developers of a large provincially-own piece of land on the south side of Wellesley, to hive off a 0.6 hectare portion of the property for a park, to be located at 11 Wellesley. The city also managed to buy more land on the site by using Section 42 funds provided by a pair of developers working on buildings nearby (the sums have not be disclosed).

“Rarely do you have the opportunity to work on a piece of land that’s so significant, in such a significant location, with the added advantage of having it become part of the public realm,” Mark Mandelbaum, chairman of Lanterra Developments, told The Toronto Star. 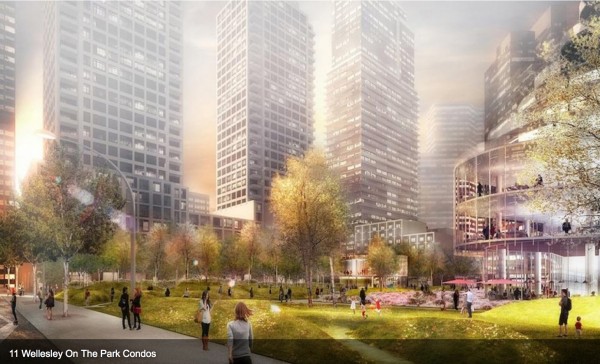 That deal, however, is the exception. When David Mirvish submitted a development application to knock down the Princess of Wales theatre and two King Street warehouses to create a gallery/condo tower complex designed by starchitect Frank Gehry, city officials asked if he’d set aside some of the property, which occupies much of a city block, to create a parkette.

Mirvish refused, offering instead to contribute a cash-in-lieu payment, to be deposited in the city’s parkland acquisition reserve fund. (See Sidebar: How the parkland levy system works)

That kind of offer has become a common trade-off. Ever since the city changed the rules governing parkland dedications, builders have been opting – often with the blessing of the local city councillor – to provide dollars instead of land.

According to documents obtained by Spacing through an access to information request, the city, between 2004 and 2009, received on average 4.9 ha of land per year through dedications by developers. In other words, builders aiming to erect residential projects on a parcel of land would transfer title of a portion of those properties to the city’s department of parks, forestry and recreation, to build a park.

Between 2010 and 2014, the documents reveal, that average annual tally plunged to .64 ha – the size of a regulation soccer pitch – for the entire city.

Annual dedications of parkland, by district, in hectares

Not coincidentally, the funds flowing into the parkland reserves, but especially via the new “alternate parkland dedication” formula which came into effect in early 2008, have jumped sharply, from $9.9 million in 2010 to $36 million in 2013, according to a two-year-old staff report. Indeed, between 2010 and 2013 the city collected $94.2 million through this new formula – a figure that accounts for almost half the parkland levies collected by the city during that period.

While cash may seem like an attractive alternative, especially for a cash-strapped municipality carrying lots of debt, the practice of accepting money instead of land has become highly problematic from a planning policy perspective.

When a builder hives off land on a development parcel to create a park, the additional open space will be physically close to the additional population generated by the new residential units. But when the city accepts cash, there’s no guarantee the money will create or improve open space in the proximity of the project.

Under the city’s 14-year-old policy framework, revenue from Section 42 park levies can be spent on city-wide green spaces or within the administrative district where the development has occurred. So cash from a downtown high rise could flow into a new park or park improvement project in North Toronto, or High Park.

The amounts are not trivial: In the case of wards 20, 27 and 28, which together generated $142.6 million in levies between 2011 and 2014, the policy allows a quarter of those funds to be spent anywhere in Toronto, and another quarter to be allocated to parks anywhere within South District.

With the alternate deduction rate, the city’s policy is that the funds be spent on parks projects that are “in the vicinity of” or “accessible to” the development from which they originate. But there’s no definition of what those terms mean. Nor does Parks, Forestry and Recreation (PFR) provide any targets or benchmarks for how and where those parkland revenues flow, especially the portions to be spent on park improvements. Last, it is difficult to discern, based on the city’s reporting, whether those dollars has found their way to areas deemed in the official plan to be deficient in public open space.

Besides the lack of transparency, the policy is undermined by the fact that a single set of rules must apply to two radically different property markets.

Councillors, in theory, can influence whether developers offer cash or land, and some argue that the city should turn down the money. “The councillors have to say ‘no,’” asserts Scarborough Southwest councillor Michelle Berardinetti, current chair of the parks and environment committee.

It’s an easy position to take in a low-development ward. In suburban areas where land is plentiful and inexpensive, councillors have leverage over builders and can compel them to ante up land for a new park.

The dynamic downtown is radically different. Toronto Centre councillor Kristyn Wong-Tam says she tells high-rise builders that the city wants land, not cash. But developers putting up a condo on a small parcel mostly balk, she adds. “[They say], ‘Oh councillor, that’s not doable. It’s easier if the city acquires the land.’”

There are other impediments to acquisitions in high growth zones: For one thing, the city is legally prevented from buying property at prices above the assessed value, even though market real estate prices today tend to be far higher. PFR officials, in turn, don’t like small parks or squares, which are typically what’s on offer with most downtown developers who are prepared to provide land. “Parks staff aren’t interested in small parcels,” says Wong-Tam.

The bottom line is that developers will give cash in areas that desperately need open space and real estate in areas that aren’t experiencing population growth or speculative pressure. But when it comes to buying land, the city, despite its large reserves, simply can’t compete in areas facing sky-rocketing real estate values.

“It’s a really serious problem,” observes Willowdale councillor John Filion, whose ward includes both high-density towers and low-rise single-family homes. “The city takes a very short-sighted approach and will certainly pay the price in the years to come.” In his view, council should establish special parks reserve funds specifically for high-growth nodes and ensure that 100% of the park levy revenue is spent in those areas. “The money should stay in the area where it’s generated.”