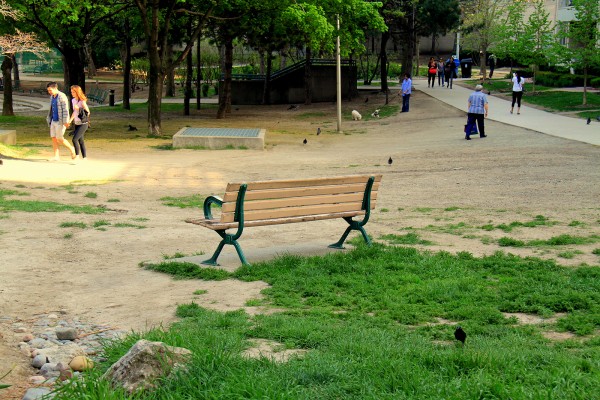 Over the past few years, the city has seen a handful of examples of park construction that offer impressive illustrations of how intensification and forward-looking public space planning can proceed hand-in-hand. Waterfront Toronto developed Corktown Common not as an afterthought, but rather as a focal point for the Canary District, in the West Donlands.

Not far away, the City and Toronto Community Housing, with strong encouragement from developer Daniels Corp., established the eponymously named Regent Park, on Dundas East west of Parliament, as an anchor space in the middle of the mixed use/mixed income projects going up on the old Regent Park lands.

But for each of these examples, there are many more where high density development has no obvious connection to any kind of public space acquisition strategy. And there are also cases where the city’s parkland investment plan seem troublingly disconnected from existing policy goals.

Herewith, a tale of two such parks. 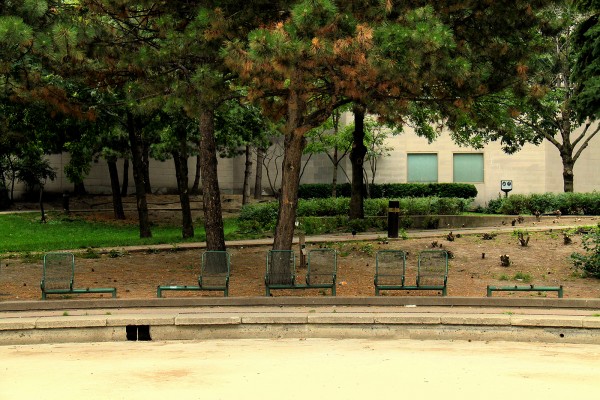 Besides the parkette in Liberty Village, the oddly-shaped swath of open space south of College Park may serve the highest concentration of local residents anywhere in Toronto. Abutted on three sides by high rise condos, including the two Residences of College Park condos (45 and 52 storeys) and the massive 985-unit AURA tower (Canderel Stoneridge), and College Street office complexes on the fourth side, College Park is an outdoor room that serves thousands of condo dwellers.

It should be one of Toronto’s great urban squares. Yet College Park has limped along for years as an increasingly neglected space, and, according to documents obtained by Spacing under access to information requests, planned improvements will be done on the cheap, with no contribution from the city’s vast parkland reserves, 50% of which are meant to finance improvements.

The park exists because of a forward-looking land dedication deal negotiated by city planners years before amalgamation. The ownership of the green space, however, is problematically fractured, and includes the City, Canderel, College Park, which owns the stark concrete terrace just outside the food court, and two other entities.

In the mid-1980s, the parks department erected a field house and skating rink/fountain, but those facilities were shuttered two years ago. City parks officials embarked on a “major revitalization and place-making” process three years ago, with an eye to improving the space to accommodate changing use patterns and the block’s increased density.

But that exercise became bogged down by bickering over design, unclear ownership issues and the budget for the project, according to documents obtained by Spacing. From the outset, Parks, Forestry and Recreation (PFR) officials made it clear the budget would not exceed the $3 million the City obtained from AURA through Section 37 contributions. FOI documents show that PFR officials never bruited the possibility of drawing on the parkland reserves, which included $50 million generated by development within Ward 27, where College Park is located, between 2011 and 2014.

After consulting with the residents’ stakeholder committee, MBTW, a landscape architecture firm retained by the City, produced a $4.5 million plan that called for re-establishing the rink and the change house. But in April, 2013, a design review panel tore into MBTW’s concept, saying it couldn’t be built for the approved budget and didn’t meet the residents’ desire for a tranquil green space, such as Teardrop Park, a 0.7 ha green space wedged between a cluster of high rises in Battery Park, New York. City officials sternly instructed MBTW to keep to the $3 million budget.

MBTW came up with a revised plan, with a small water feature and a semi-circular seating area, in the summer of 2013. But money issues reared up again, this time over the cost of removing the existing structures on the site, as well as a simmering legal dispute between the City and Canderel over waterproofing repairs to the ceiling of the city-owned garage beneath the park.

As MBTW’s lead architect Christine Abe warned PFR in an August, 2013 memo, the $3 million revitalization budget will have to soak up the cost of demolishing or burying existing structures. What’s more, the scaled back landscaping plan ends abruptly at a line well short of the diagonal walk-way from College and Bay, leaving a scrubby rectangular space in the north end of the park. Two other areas within the overall space are excluded altogether from the design. The project is supposed to be concluded later this year, although there’s little evidence that the construction process has even begun.

The completion date is a “moving target” due to Canderel’s delays, says area councilor Kristyn Wong-Tam. “It is now 2015. We have spent close to four years negotiating with the various stakeholders. [The budget] is still not enough to do what we want.” Asked why the city didn’t use Section 42 funding, she cites the funds required to make 11 Wellesley happen. “We have to be very strategic about how we deploy Section 42 local park improvement [funds].” 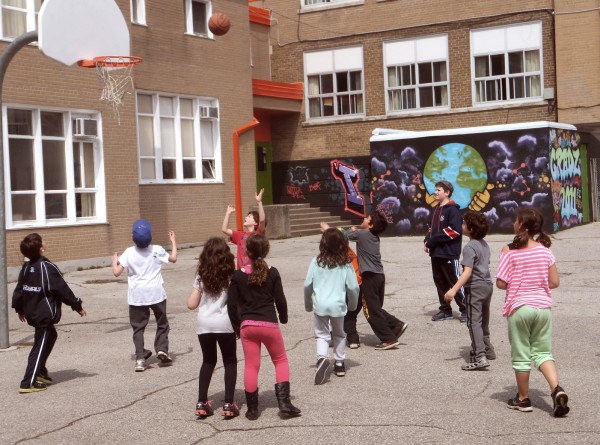 In 2010, city officials revealed they intended to spend $7.5 million on a 2.5 ha school property near Sheppard and Wilson Heights that had been deemed surplus by the Toronto District School Board. It would become Toronto’s single costliest park purchase in both size and price in recent years.

The patch of green space behind 819 Sheppard West, long used as a school playing field, is in a district deemed to rank second lowest on the city’s five-point scale for parkland provision. Though surrounded by single-family homes, it is also situated near the mid-rise condos going up along Sheppard. What’s more, the deal is one of a series of moves by the city to acquire surplus school properties.

Yet according to documents obtained by Spacing, it appears the city had to drastically over-spend to consummate a public-private partnership scheme that remains unresolved many years after it was initially disclosed to the public.

Initially, the city wanted to buy 1.5 ha on the southern portion of the site, and sought to partner with The Toronto Heschel School, a fast-growing Jewish parochial academy that wanted the school building on the northern portion. (The Toronto District School Board had declared the school surplus.) Under the proposed agreement, the city would buy the entire site and the private school would buy back the building on the northern half, leaving the city with new community park space on the rest of the large tract.

In a September 2009, email acquired by Spacing, the city estimated it would pay $3.6 million to $4.5 million for the southern portion. But the school board’s land management subsidiary refused to sever the property, and the school, in turn, backed out of the initial arrangement. As a result, the city had found itself with no choice but to acquire the entire property for $8.6 million, and then lease back the building to Heschel, says local councillor James Pasternak, who notes that the arrangement was negotiated before he took office in 2010.

Where the deal stands now is a bit of a mystery. According to a January 23, 2013, email from Heschel to city parks officials, the school still has designs on the southern portion of the property that the city has said it wants to transform into a park. “THS remains quite committed to, and wishes to express its intent, to purchase the north portion of the site… including the right to purchase the open/recreational space on the south portion for its programming (consistent with its use to date) or in the alternative, lease it for a term of 49 years.”

In an interview, Pasternak admits the negotiations continue to drag on, five and a half years later. But, he adds, the city has recouped a portion of that initial purchase price through the rental payments made by Heschel (he won’t disclose the amount). “The financial model wasn’t all that bad,” he suggests.

As for the park, Pasternak remains optimistic it will receive even more investment from the parkland improvement fund – play structures, landscaping and some other programming — once the ownership issues are ironed out. “There’s enormous potential there to take the southern part and turn it into a fine neighbourhood park,” he says. “In the long run, it will be a major community asset.”