Under Section 42 of the Ontario planning act, municipalities can ask developers to dedicate land or cash for the purposes of creating new parkland. The City’s policy goal for implementing Section 42 has been essentially unchanged since 1999-2000, when council adopted the so-called “Parkland Acquisitions Strategic Directions Report,” and then the 2002 Official Plan. These documents laid out the high level principles for new public open spaces, with an emphasis on adding parks in “priority areas,” i.e., communities deemed to be short of such spaces.

Overall, Toronto owns about 3 ha of parkland per thousand residents, but some areas, especially in the older parts of the city, have much less.

The general aim is for the city to ask developers to cleave off a portion of their properties for open spaces instead of expropriating land. Section 42 works for subdivisions, where it’s possible for a developer to hive off surplus land. But it’s not suited to high-rise projects on small sites with little space to spare.

In fact, new rules approved in 2008 allow the city to take cash instead of land if council “deemed” a development site to be unsuitable for a park – e.g., a downtown warehouse that’s being redeveloped as high rise with the same footprint. In practice, this policy has meant that the local councilor can exercise a high degree of discretion as to whether developers are asked to hand over land or money.

Council, at the same time, re-jigged the formula for collecting the money, creating an alternate rate for conveyances of park land. According to the city, the system today works something like this:

“The basic parkland dedication requirements are 2% of the site for commercial or industrial uses and 5% of the site for all other uses, including residential uses. If the property is located in a Parkland Acquisition Priority Area, then it is subject to an Alternative Parkland Dedication Rate of 0.4 hectares per 300 dwellings units.”

The cash collected from parks levies are then divvied into five pots (and held in reserve funds): 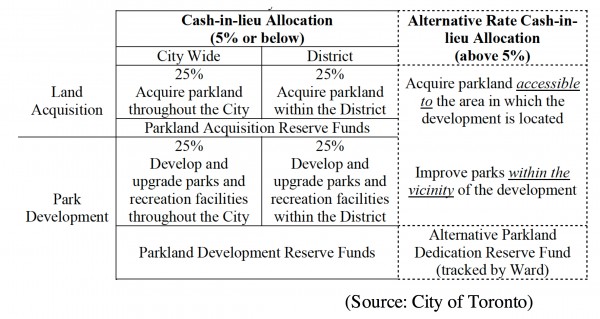 In practice, the establishment of a park may draw on money from these various reserve funds as well as other sources, including private donations, Section 37 funds, and land dedications.