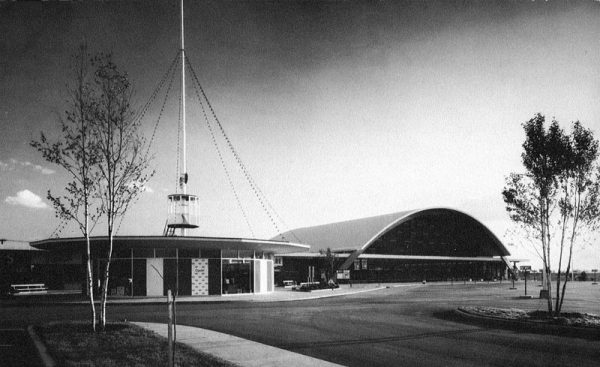 It was only a shopping mall, but when the Parkway Plaza opened at Ellesmere Road and Victoria Park Avenue in 1958, it signalled the arrival of space age in the Toronto’s eastern suburbs.

Just five years earlier the site was in the middle of Maryvale, a swathe farms and fields on the borderlands of the Toronto urban area named for the nearby country estate of Senator Frank O’Connor.

A short distance south, over the Canadian Pacific tracks near Lawrence Avenue, the first suburban culs-de-sac and commercial developments were rising from the cornfields.

Modernity arrived quickly in Maryvale. Highway 401 opened just to the north in 1956, and housing subdivisions sprouted from the agricultural landscape with astonishing speed.

To service these new homes, the Cadillac Development Corporation purchased the lots at the southeast corner of Ellesmere and Victoria Park for a shopping centre and hired Bregman and Hamann architects to draw up the blueprints.

Bregman and Hamann–the forerunner to today’s B+H architects–was established as a partnership between University of Toronto graduates Sidney Bregman and George Hamann in 1953.

The Parkway Plaza was one of the firm’s first commissions and it helped cement a lengthy relationship with Cadillac, which merged with the Fairview Corporation in 1974 to form Cadillac Fairview, one of Canada’s largest property companies. 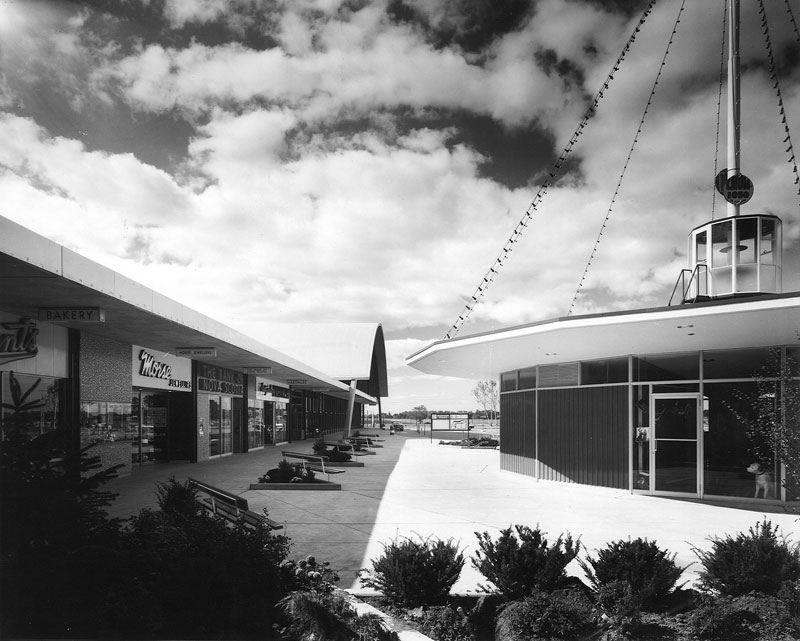 Before it was overhauled in the 1970s, Parkway Mall included a parade of street-facing stores, including a Bank of Nova Scotia branch, Hunts bakery, Morse jewellers, Hodgin’s hardware, and Carousel records (all visible above.) Image: B+H architects/Panda Associates.

In many ways, the design of Parkway Plaza was typical of suburban shopping centres across North America. Most of the site was occupied by a surface parking lot (touted as “a world of free parking” in advertisements,) and many of the stores were simple, single-storey structures.

What set the Parkway apart was the design of its anchor unit, leased to Grand Union supermarkets, that was essentially a gigantic parabolic arched roof with glass walls at either end. Supported by curved wooden beams, the structure was among largest of its kind built in Canada in 1958.

Wooden arches were firmly in style in the 1950s. Douglas M. Hall, the architect of the Don Mills Curling Rink, which opened two years after the Parkway Plaza, used similarly curved wooden beams to create a distinctive sports dome at Don Mills Road and the Donway.

Hoping to trade on its futuristic design, Parkway Plaza arranged several goofy space-themed promotional stunts for opening day. The “Queen of Outer Space” popularity contest, however, was the one that caught the attention of the Toronto Daily Star.

Nine young female models from across Toronto—one for each planet in the solar system, including Earth—were dressed in black leotards and sweaters, red shorts and capes, and “outer space helmets” and paraded around the plaza before a crowd.

“Shoppers are being asked to judge the girls on the basis of personality, and beauty of face, and beauty of figure,” wrote the Star. The winner, whose name was entered the most times into a plexiglass replica of Sputnik, received a Hollywood screen test and a meeting with actress and socialite Zsa Zsa Gabor, the star of the soon-to-be-released movie Queen of Outer Space. 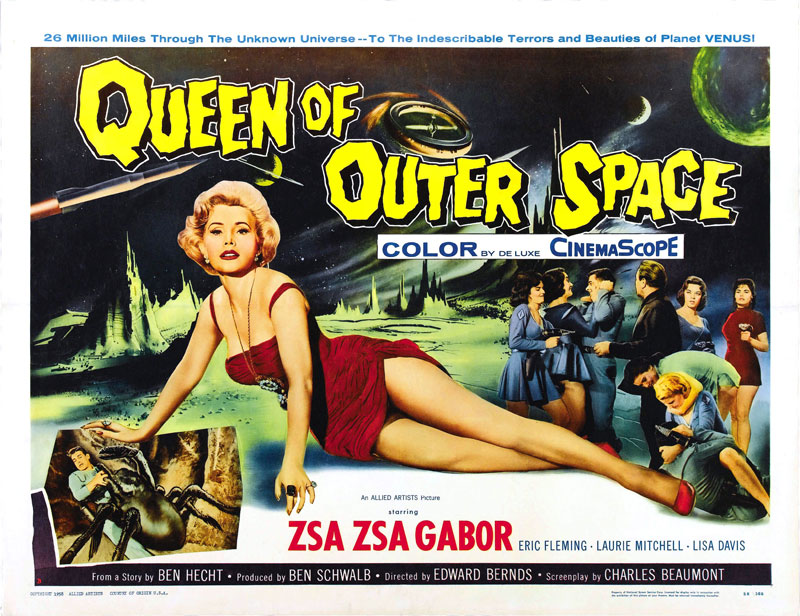 In that film, an all-male crew of astronauts lands on Venus to discover the planet is occupied almost entirely by “long-limbed beauties” (a few giant insects are thrown in for good measure.) You can pretty much guess how the plot unfolds, but this dynamic exchange is worth highlighting:

Male astronaut: “You mean we’re the only men on the whole planet?”

In addition to the beauty contest, a full-page advertisement in the Star promised an appearance by the 46-piece “Skyraiders” Lions marching band, “funny” clowns, and a live radio broadcast by CHUM and CKEY from the Carousel record store building. The day was fuelled by free Pepsi-Cola and Shopsy’s hot dogs. 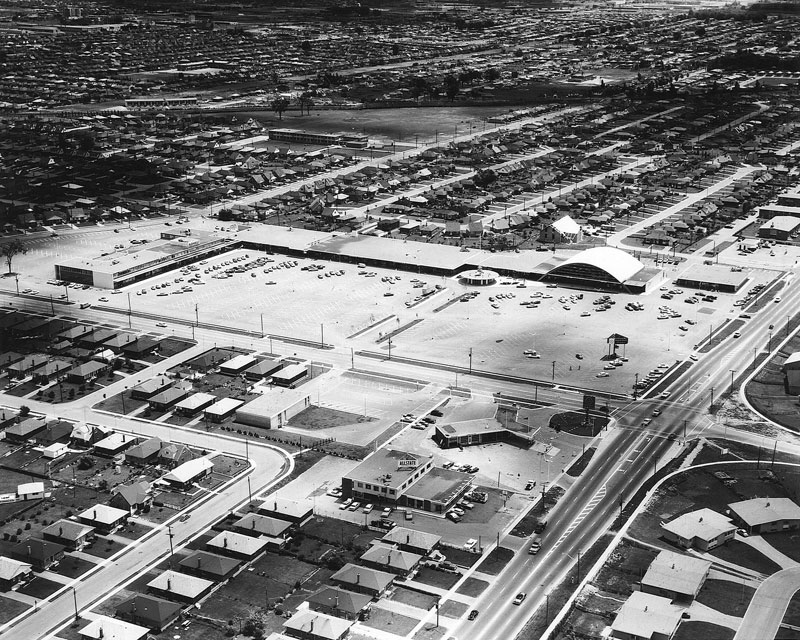 A major overhaul of the Parkway Plaza in the late 1970s wrecked many of the original modern design features. Image: B+H architects/McCullagh Studio

Grand Union didn’t last long in the curvilinear structure at Ellesmere and Victoria Park. The New Jersey-based company sold to Quebec chain Steinberg’s in 1959 and vanished from the Canadian retail landscape. Steinberg’s operated the store under its own name and later under the Miracle Food Mart brand until 1989.

In the late 1970s, Parkway Plaza underwent significant alterations. The circular record store building was demolished and the stores enlarged into space previously occupied by the parking lot.

The revamp turned the shopping centre in on itself. Stores that used to face the outside world were reoriented to have their windows and entrances inside the mall, a move that left the complex with a forbidding facade of service doors and blank concrete walls.

The additional retail space also overwhelmed the supermarket, diminishing its once-dominant presence at the west end of the 20-acre site. At some point, its wooden support beams were covered with concrete.

Since 2005, when A&P sold the Dominion brand, the supermarket has operated under the Metro banner.

In 2009, Parkway Plaza became the first post-war supermarket building to be added to the City of Toronto’s Inventory of Heritage Properties, and it was designated under the Ontario Heritage Act in May, 2015.

Now shielded by provincial law, the plaza is protected from further unsympathetic alterations.

The Parkway Plaza and many more incredible Modernist buildings across the city will be the subject of a Heritage Toronto bus tour Saturday, September 24. Led by Dave LeBlanc (Globe and Mail,) Gary Miedema (City of Toronto,) and Chris Bateman (Spacing,) Modern TO will explore the history of Toronto’s post-war urban planning and architecture. Sign up.