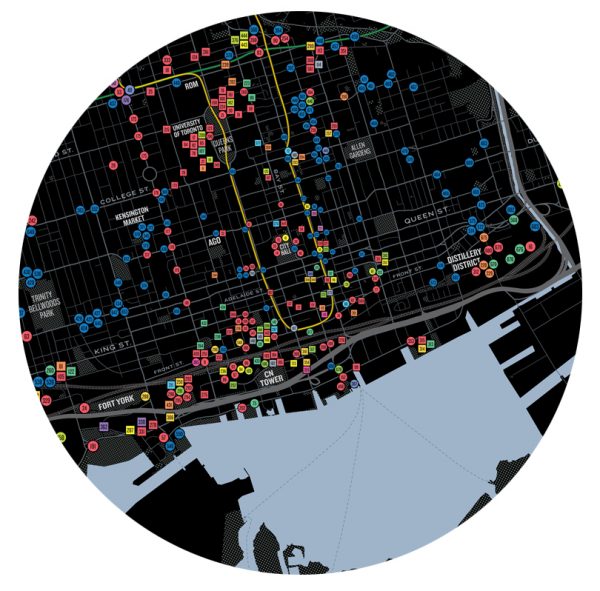 By: Jeff Biggar and Ilana Altman

The Artful City was formed in 2015 with a simple mission to investigate public art in Toronto and spark a dialogue about its limitations and opportunities. The City’s downtown was continuing to develop at breakneck speed, but the role of public art in shaping the public realm around new buildings seemed like an afterthought. Meanwhile, knowledge of how public art is commissioned and funded was restricted to insiders. In our minds, a growing interest in public art suggested a need to streamline public discourse on the topic with discussions of how works get produced, including representing all the professionals and community groups involved. As a starting point, it felt appropriate to understand the evolution of public art from an historical perspective. We wanted to understand the past to situate the present, so we could ask the right questions and raise the most important issues that may start to push public art in new, forward-thinking directions. On that note, we are excited to share with you some of activities of the collective from the past two years.

In early 2016, the Artful City launched a blog series with Spacing to convene a conversation about public art in Toronto, provoke questions about policy and governance issues, and stimulate dialogue and debate among artists, architects, developers, consultants, policy wonks, city officials, and educators who have a stake in public art and its contribution to the city. Our contributors represented these groups of people, with pieces ranging from measuring the success of public art programs, to interviews with artists pushing the boundaries of how public art is conceived and consumed, and calls for revamping Toronto’s public art commissioning process with artists in mind. Cognizant that many folks consider public art to be more than autonomous objects in space, the blog included perspectives on the role of community arts as public art, as well as pieces that capture a growing argument for temporary and durational work over permanent ones. We also took these issues offline and put them in conversation at the FORMS festival and Losing Site, an upcoming panel discussion co-presented by OCAD University and the AGO. It remains clear from our contributors’ passion for the subject that the interest in public art is alive and growing.

While the blog series continued, the Artful City was hard at work on an ambitious mapping effort to better understand the growth and composition of Toronto’s public art landscape over the past 50 years. We spent a year gathering data, in collaboration with the Martin Prosperity Institute, from isolated City databases and consolidated everything into one central place. The result is a first-of-its kind visualization of formally tracked public art projects. The work is presented in partnership with the Art Gallery of Ontario, and currently on view in their Community Gallery until May 21, 2017. 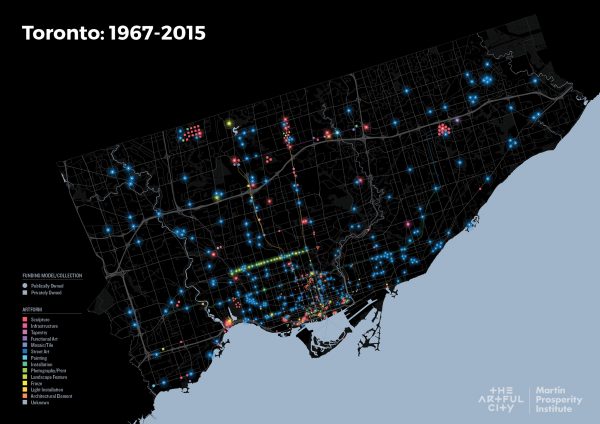 The city is in its hey-day for public art, despite a rich history of civic support and government legacy projects of Canada’s 1967 centennial. In fact, 65% of works commissioned in the last 50 years appeared after 2005. This can, in part, be explained by an intensifying downtown core, which requires private developers to provide public art under the City’s ‘percent for public art policy.’ Not surprisingly, intensification has concentrated public art in the downtown where approximately 50% of works reside. Commercial development of the financial district, followed by a wider residential development boom, has also facilitated a noticeable change in public art ownership: close to 30% of the work across Toronto remains in private hands.

We believe the activities of the Artful City tell a compelling story of how public art has evolved in Toronto and where we are headed. Some recurring themes persist and demand attention. Our once innovative policies are failing to keep space with the current demand for new directions in public art: works with new technology, duration, and ones rooted in a socially-based process. Traditional preferences for the visual and permanent are out of touch with new possibilities for artistic practice that consider the city as a space in perpetual flux. Spatially, the developing with density model that has taken over Toronto has given some areas lots of public art and others little. We must summon more inclusive strategies for public art that allow artists to enrich the outer limits of the city as well as the downtown core. To be sure, Toronto has achieved a significant volume of public art. But the City will not become an international leader in the field by doing more of the same.

EDITOR’S NOT: Parts of this article were adapted from Spacing’s Feb 2017 winter issue, “ 50 years of Public Art in Toronto: where do we go from here?” by Jeff Biggar and Ilana Altman.

The Artful City is a Toronto-based collective that convenes discussions about the role of public art in Toronto through research and public engagement and creates space for more diverse and inclusive practices. Visit us the AGO, “Mapping Toronto’s Public Art Landscape, 1967-2015” on view until May 21st, 2017.