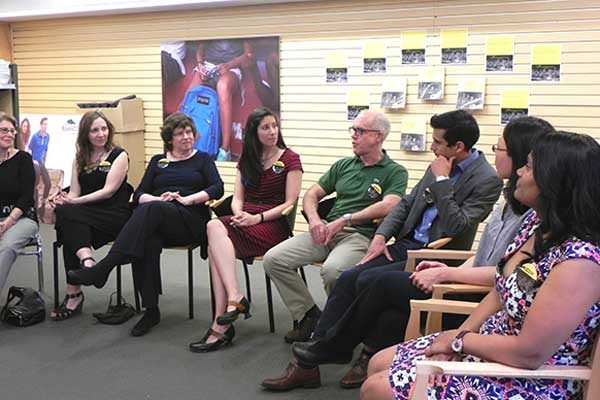 On June 17th, School of Community and Regional Planning alumni, students, and faculty gathered at the UBC Bookstore to launch the new comprehensive planning book, Planning Canada: A Case Study Approach, edited by SCARP PhD Alumna Ren Thomas. Various contributing authors were present at the launch to answer questions and discuss their specific contributions to the book, which features over thirty planning case studies.

Moderating the panel was SCARP Adjunct Professor and Spacing Vancouver Editor-in-Chief, Erick Villagomez, who spoke to the book’s important and unique contribution to planning knowledge, in being the first planning book to use a case study approach with Canadian precedents. In order to allow the audience to get a better understanding of the book, the panel discussion and questions were organized around some key themes present in the book: Engagement and Dialogue with Marginalized Groups, Public Engagement Across the Larger City and at Smaller Scale of Development, Unique Planning Cases, and Planning for the Future.

The discussion began with an introduction by Ren Thomas, who mentioned that the book is intended to be for anyone interested in planning. As Thomas stated, the target audience for the book is not only planning students, but planning enthusiasts and non-experts that seek to have a better comprehensive understanding of planning successes and issues in Canada. Non-planning students should be able to pick up the book and have a better understanding of planning in Canada after reading it, according to Thomas.

The editor also mentioned that the book hopes to build bridges across planning knowledge in Canada. British Columbia, and other provinces in Canada, often achieve many planning innovations and successes—and instructive failures—but too often do not hear about them, and as a consequence, cannot learn from them. By reading the book, planning practitioners across Canada get a better understanding of the different planning process and initiatives happening in the country.

The discussion on the chapters of the book began with SCARP PhD student Magdalena Ugarte, who published a chapter on the Vancouver Dialogues Project, which is a pilot initiative by the Social Planning Department at the City of Vancouver. Using an appreciative-inquiry framework, the Dialogues Project, aimed to bring First Nations, urban Aboriginals and Immigrant communities together to discus shared commonalities. Ugarte, mentioned that the chapter sought to highlight the emphasis that the city placed on the importance of storytelling in helping to bring people together, and creating a safe space for conversations for marginalized and oppressed groups, while using appreciative-inquiry as an engagement method.

Also present at the event was, John Foster, who published a chapter on Richmond’s Social Development Strategy along with SCARP Professor Leonora Angeles and SCARP Alumna Olga Shcherbyna. Given that Richmond has the highest population of immigrants in Canada, an important planning issue focused on understanding how to create community with a diverse population that speak a variety of languages. In essence: how do we effectively reach out to immigrants? The chapter, itself, outlines the creation and importance of Richmond’s Social Development Strategy in helping to create an accessible and representative social plan for all of Richmond’s diverse populations.

SCARP Director and recent recipient of YWCA Women of Distinction Award, Penny Gurstein, co-authored a chapter with SCARP Alumna Sylvia Vilches, looking at the spatial impacts of urban poverty for lone parent, female-headed households in Vancouver. As the presenters mentioned this is an important study, 20% of households belong to lone parents and are a very “stable and enduring makeup of Canadian households.” Although they discussed various interesting issues, one of the most impactful dealt with how this population uses the city. For example, due to limited income, many lone, female-headed parents move around the city in specific ways, often walking more to food banks, and childcare centres because they cannot afford the bus. Consequently, they also make the most use of our public spaces and do so as an extension of their domestic life, given that their living conditions are often substandard. Ultimately, the discussion highlighted the fact that our understanding of this demographic can, and should, impact how we plan and design our cities.

Adjunct SCARP Professor, and former Co-Director of Planning for the City of Vancouver Anne McAfee wrote a chapter on the Vancouver’s renowned CityPlan process. She mentioned that CityPlan emerged from a need to capture all the planning issues in one document, while also ensuring that as many people as possible were involved in the process. She spoke of the successes and also difficulties they encountered in undertaking the initiative, which aimed to “Hear about All Issues, Hear From New People, and Hear in New Ways.”

As CityPlan was, at the time of its inception, a pioneering undertaking, Amanda Mitchell and SCARP Alumna Lisa Brideau spoke to more recent innovations at the City of Vancouver: more specifically, how the City engaged the public for the first time using online ideation tools to crowdsource ideas. This was done during the ideas collection phase of the Talk Green To Us campaign, as a part of the Greenest City Action Plan. Although they were clear to emphasize the symbiotic relationship between online and off-line engagement tools, they described one of the best aspects of engaging residents online was that the ability for people to quickly get direct replies to their input.

Switching scales from city-wide to more localized, Leslie Shieh, another SCARP Alumna panelist, spoke to her a chapter on public markets, and the key functions that make some more successful than others. This was discussed in specific reference to her work on the Westminster Quay Public Market—River Market—revitalization project, in New Westminster, that began in 2008. The interesting history of the initiative was described, as well as the three functions that defined its success: making it an activities precinct, a supported network of local businesses, and a place for community engagement.

Finally, Timothy Shah, also a former SCARP Alumnus, spoke to the importance of framing discussions around climate change and planning, by trying to understand the impact that it is already having in the community. The particular community highlighted in his case study was Elkford, BC, which Shah described as being a model for adaptive capacity, climate uncertainty, and risk communication. He also spoke of the importance of understanding how to best convey climate change information to the public, which is elaborated on in the chapter.

Overall, the event was a success, highlighting the innovative and important planning work that many SCARP faculty, students and alumni have engaged. Hearing about both planning successes and failures was particularly instructive. And I look forward to learning more….Planning Canada is definitely on my reading list now!

For more information on Planning Canada, visit Oxford University Press website. The book is also now available at the UBC Bookstore or can be purchased online at Amazon.

Maria Trujillo is a Masters student at the School of Community and Regional Planning. She is an arts enthusiast that seeks to understand how to use art as a community engagement tool for social change.