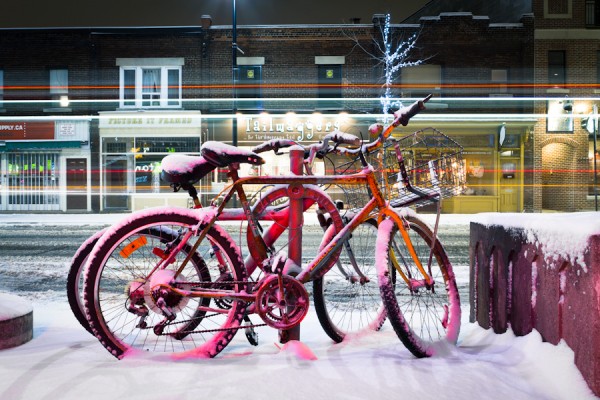 This post, by researcher Emma Cohlmeyer, is part of Spacing‘s partnership with the Toronto Cycling Think and Do Tank at the University of Toronto. Find out more about the think tank, and the series, here.

How do you get around your city? Do you cycle? Would you like to cycle? What influences your decision?

There have been numerous attempts to encourage a shift towards active transportation and cycling. The most high profile of these have focused on the construction of physical infrastructure such as separated bicycle lanes, bike parking and destination amenities such as change-rooms and showering facilities. Due to tight city budgets and the slow pace of infrastructure development, cities like Toronto have lagged behind other urban centres which have fast-tracked their cycling infrastructure. In spite of this, Toronto has greatly increased its cycling population. A recent Toronto study estimates the increase in the number of cyclists, from 2001 to 2006, to be as much as 30%. While this increase shows positive signs, there is still significant room to grow.

Researchers from the Toronto Cycling Think & Do Tank have been working on the development of A Toolkit to Accelerate the Adoption of Cycling for Transportation. This toolkit takes an original approach: linking behaviour change theory and cycling promotion. The toolkit is based on a thorough review of existing scholarly literature and builds on the practical components of successful cycling programs from around the world. The result is an evidence-based, adaptable model, providing a guideline for a cycling promotion program design.

The Toronto Cycling Think & Do Tank will be using this toolkit in a pilot project in 2013. The idea is to move beyond “traditional” cycling campaigns – which often strive to raise awareness, promote the benefits of cycling and provide information. While these initiatives do play a role, many studies have concluded that knowledge and information campaigns alone do not lead to actual behaviour change. The Toolkit to Accelerate the Adoption of Cycling for Transportation recommends a more supported, targeted and “give it a try” approach to cycling encouragement, including these general steps:

An important additional factor, and one that must be ongoing, is the use of various techniques to draw people in and inspire widespread participation. Techniques such as pledges, small incentives to encourage initial involvement, the creation of social support networks or local cycling hubs, the presence of an enthusiastic cycling “champion” to model the desired behaviour, and periodic, large-scale community events to keep new, as well as experienced, cyclists motivated are some examples of engagement tools. These elements involve the target audience, instill a sense of ownership in the program and help sustain the behaviour change.

The first step, in the process, is to identify and understand the target audience. This could be a particular demographic group: school children, female non-cyclists or senior occasional cyclists, as examples. Ideally the group is one that will, for a variety of reasons, be amenable to cycling. We know, for example, that populations making big changes in their lives are often open to additional new behaviours. Once the group is identified, a more individualized, targeted intervention can be developed and applied.

While education, awareness and information can affect and shape attitudes and intention; barriers ultimately mediate whether they are expressed through behaviour. Common barriers to cycling include fear, perception of safety, perceived lack of comfort, distance, negative stereotypes related to the “image” of a cyclist and the power of habit as a determinant of travel behaviour. Ultimately, it is when barriers, both internally and externally, are low that behaviour change programs are effective.

It is fascinating to see the success of countless cycle encouragement programs in Toronto and around the world. Many incorporate one or more of the steps and tactics presented in the toolkit. Our research suggests the combination of these steps will be more powerful than single interventions. The wheel does not need to be developed from scratch – rather the programs that already exist can be supplemented and looped into a larger framework, in partnership with local community groups. Our work is about expanding, enhancing and connecting communities and activities that support cycling.

Emma Cohlmeyer recently completed her Masters in Urban Planning at the University of Toronto. She has always been intrigued by urban life, cities and the built environment. She is fascinated by the dynamic and diverse ways that people are able to shape and influence their city, while at the same time how urban form is able to shape its population.