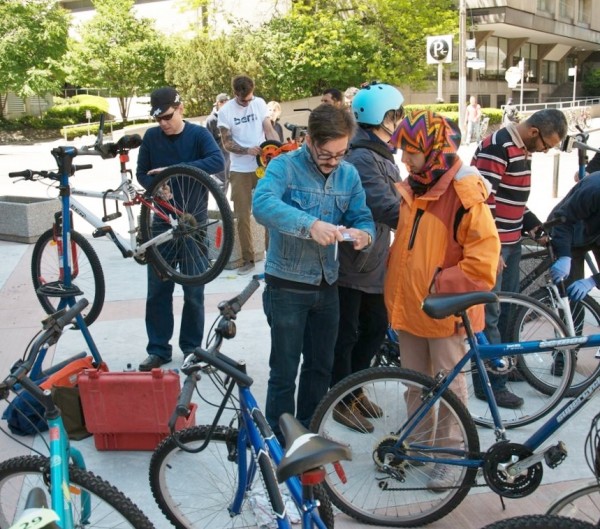 The first step was to discover what residents needed

This post by Katie Wittman is part of Spacing‘s partnership with the Toronto Cycling Think and Do Tank at the University of Toronto. Find out more about the think tank, and the series, here.

On a recent Saturday in May, the Cycling Think and Do Tank partnered with BikeChain and the Charles Street Residences   for graduate students at the University of Toronto, to hold a free bike tune up clinic to help residents get ready for a summer of cycling. With the generous support of volunteer mechanics from the Tank, Charles Street Residence Life, BikeChain and Curbside Cycle, the event repaired and tuned up approximately 100 bicycles. 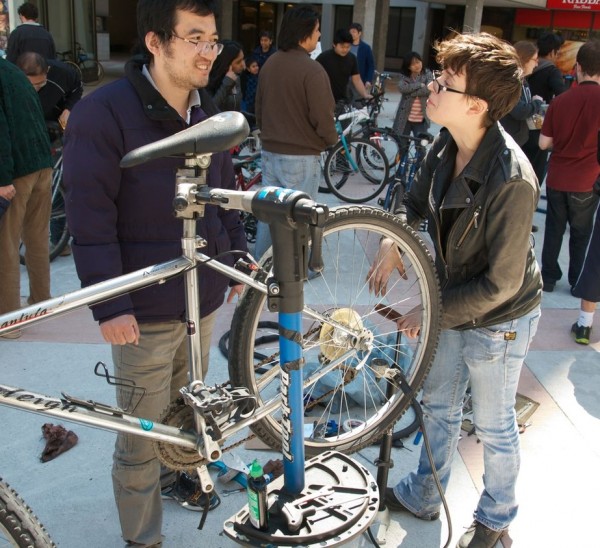 Jen was one of our superb volunteer bike mechanics

Couples, families and individuals came out in large numbers with bikes of all shapes and sizes. After having their bike fixed, participants also got to choose a treat from a bag of goodies provided by BikeChain: brand new lights and bells for bikes! The excitement in the air could be felt for blocks, and cyclists and pedestrians on the street gathered around to see what all the fun was about. “Why are you doing this?” many would ask. Though each volunteer had their own unique answer, the general sentiment was that we all share a love for bicycling and want to encourage others to take advantage of this fast, convenient, healthy way to get around.

The volunteers also handed out and collected pledges from interested participants. 69 people signed on, accepting the challenge to ride their bicycle to work, school, or for errands at least once per week throughout the summer. By committing to this challenge, they were also entered to win a brand new bicycle donated by our friends at Curbside Cycle.

Some participants said “Oh that’s easy, I already bike every day!” But others were much more hesitant, and it took some encouragement to help them imagine themselves on a bike once a week. They took the pledge very seriously, and you could see them considering the implications of what they were about to take on. About a third noted they rarely ride, but perhaps that’s about to change.

As the day went on, more and more people joined the line up to receive the tune up. There were five mechanics on site, and an additional 14 volunteers. The patience and positive attitudes expressed by those waiting was wonderful. With so much interest in the event, by late afternoon there was a fairly lengthy delay in getting to the bike stands. Treats from our supporter David’s  Tea helped pass the wait, and the free lunch provided by Charles Street Residence Life was much appreciated. There wasn’t a single complaint to be heard. Participants stood around smiling, mingling with each other, and catching up with family and friends. There was a lot of talk about what people planned to do with their newly repaired bicycles. Some started asking about group rides they can join, others wanted tips on the calmest roads to ride on, and some asked about interesting destinations they should bike to in the city.

What did everyone at the event have in common that day? Summer cycling was on their mind! 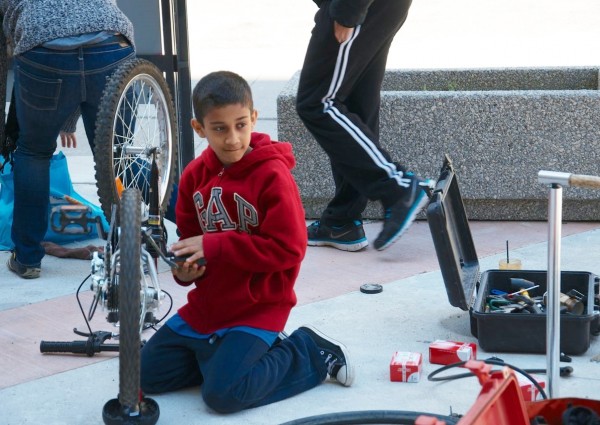 Katie Wittman is a researcher with the Toronto Cycling Think & Do Tank. All photos by Daniel Rother a student working with the project.