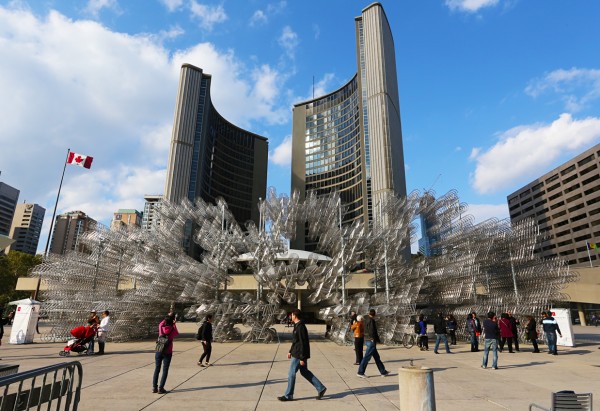 This post by Sonya Silva is part of Spacing‘s partnership with the Toronto Cycling Think and Do Tank at the University of Toronto. Find out more about the think tank, and the series, here.

Discussions about cycling policy often revolve around desired infrastructure improvements, changes to transportation policies, and the funding needed in order to build bike-friendly cities. This emphasis on investment and infrastructure is based on a “build it and they will come” model that often neglects how cycling cultures develop in different places. While infrastructure investment is undeniably an important step in making cycling safe and attractive, recognizing that there are significant cultural and social barriers to adopting cycling for transportation is another important piece of the puzzle.

In the Toronto Cycling Think & Do Tank’s work this summer, we developed a pilot project with partners CultureLink and Cycle Toronto’s unique BikeHost mentorship program for newcomers, and the University of Toronto’s DIY bike shop BikeChain, to research how to best encourage cycling uptake among new immigrants to Canada. Newcomers are an important group for exploring cycling promotion strategies for a couple of reasons. Within Canada, immigration is a vital part of growth in major Canadian cities, and increasingly it has also become central to sustaining population and economic growth in mid-sized cities across the country.

Our past research demonstrates that behaviour change initiatives work best with populations undergoing significant life changes. By targeting interventions with groups like recent immigrants, we can better identify and remove their barriers to cycling, and implement strategies to encourage people to try out and eventually sustain new behaviours. In carrying out this work, we recognized that a potential barrier to trying out cycling for new immigrants is the set of expectations they arrive with on what it means to successfully integrate into Canadian society.

With rapid economic development occurring in industrializing countries, private car ownership has increased dramatically, and the share of bicycle trips has fallen in countries where the bicycle was traditionally a significant mode of transportation. One of the most interesting cases of this change in cycling policy and culture is in China, which has traditionally held relatively high mode shares of cycling (anywhere between 30%-70% of all trips depending on the city) compared to North America (which at its highest, reaches 6% in Portland). China also serves as a good example, as it also happens to be one of Canada’s largest source countries of permanent resident immigrants over the last ten years.

The car and bicycle as symbolic objects

Though cycling has long been a popular mode of transit in China, in the 1990s cycling policies regressed, as cities took actions to remove bike lanes or prohibit children from cycling to school. Meanwhile, steps were taken to privilege and promote car ownership in order to further China’s image as a “modernized, developed” nation. This effort was reflected in advertising and public attitudes, which privileged car ownership as a sign of upward mobility. In Guangzhou, bicycle mode shares dropped from over 30% in the 1990s, to 11% in 2010. Similar patterns ring true across south and southeast Asia, where cycling is seen as a means for transport for lower socioeconomic classes, compared to exalted motorized forms which are becoming more accessible. Alongside these shifting cultural perceptions, cycling safety is also especially precarious in these countries, with few cities having devoted resources to develop cycling and pedestrian infrastructure and enforce traffic laws.

The bicycle in many places is thus considered a “second class” mode of transportation, chosen out of necessity rather than desire. This poses challenges both in China, with its rapid urbanization, traffic congestion and increasing pollution, but also here in Canada when we attempt to encourage new immigrants to see cycling as a desirable option.

How do we build cycling cultures?

In their transition to life in North America, newcomers may view car ownership as both essential for integration, and as a safer mode of transportation that offers greater freedom and mobility. Recognizing these cultural expectations is important in encouraging cycling uptake in Canada. These expectations are not restricted to newcomers either—in Canada we also grow up with cultural baggage. Our cultural norms create expectations for us to transition from using a bicycle in our youth, to driving a car as we mature into adulthood. While building better cycling infrastructure is one part of the solution to increasing cycling for transportation, getting people onto bikes also demands a cultural shift in which cycling is recognized as a normal part of everyday adult life.