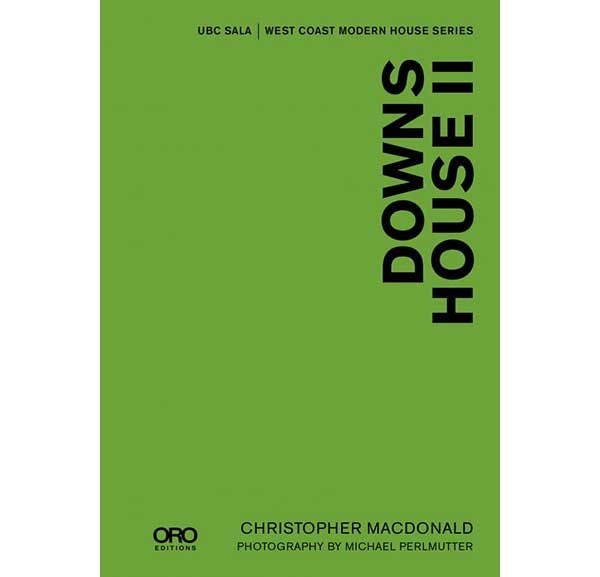 “Against the varied and positive nature of the houses depicted in this series, it is important to note the essentially fragile nature of their architectural legacy. In some instances, the care required to maintain a wood frame house in a rainforest climate might be less vigilant than is necessary, leading to some inevitable degree of physical deterioration. The overarching threat to these houses’ future, however, remains the unbridled recent increases in the value of building sites for single-family houses in Vancouver and the Lower Mainland more generally.”

In this second book in SALA’s West Coast Modern Home series, editor Christopher Macdonald—along with co-editors Leslie Van Duzer and Sherry MacKay—has selected a house that is home to one of the Lower Mainland’s preeminent architects, Barry Downs, who was able to build his first home in 1958 for less than $15,000. Given our current housing challenges, it is astonishing to think that there was a time when a site in and around Vancouver cost less than the money spent to build a house upon it ($4000). With demolition permits now numbering in the several hundreds each year, much of Vancouver and its region has become threatened with outright erasure, each day witness to the disappearance of yet another piece of our West Coast legacy. While the first house in this book series—House Shumiatcher—was not able to be saved from the wrecking ball, this new book wonders if perhaps the Downs House II can be saved from a similar future fate.

For as Christopher MacDonald reminds us early on in his text accompanying the photographs of the house by Michael Pelmutter, these early houses were testing grounds for a generation of architects in the early stages of their careers, including Arthur Erickson and Ron Thom. Looking at the other projects Barry Downs was working on in 1979, the year he built the house featured in this new book, one finds him working on the Barclay Heritage Park simultaneous with the conversion of the Carnegie library in the Downtown Eastside into the Carnegie Community Centre. The fact that these projects, varying in size and civic importance, would have all been realized concurrent with the design and construction of his home, demonstrate the architect’s nimbleness to realize projects of varying scales, all at the same time.

In a format similar to House Schumiatcher, this new book is broken into three sections, with poignant commentary by Christopher Macdonald interspersed with photography of the house by both Barry and the aforementioned Pelmutter, rounded out with modern line drawings of the house in plan and section. Given its brevity—76 pages at a size that fits comfortably into the palm of your hand—there was not the space to include reproductions of the architect’s original hand drawings of the house, the extents of which might very well have necessitated a whole volume on its own. Regardless, it is the message here that is key: that something must be done to communicate the importance of preserving this legacy.

Such a sentiment is clear in much of Christopher Macdonald’s essays, and while Leslie Van Duzer hinted to what the causes might be for such rampant land-escalation in recent years, this latest book’s editor does not mince words:

“The extreme escalation of local land values has been accompanied by an arguably equal increase in regulatory oversight, serving to reinforce any natural inclination to risk aversion. Given the Vancouver region’s relatively brief history it would seem that some kind of shared conclusion regarding material heritage and preservation would emerge. On the contrary, impulses as distinct as nostalgia and the evocation of sustainability appear to provide no clear measure of the value of important historical artifacts.”

If all that remains in a hundred years’ time of these experiments in early modern house design are the photos and essays by those who witnessed their disappearance (along with this book series), Chris shines a ray of hope by illuminating those who are standing on the shoulders of the great architects of the 1960’s and 70’s. As he notes, the torch has been passed to the likes of Battersby Howat, LWPAC, and Shape Architecture, to name only a few. These architects have continued the tradition of using the single-family house as a testing ground for habitation in our hyper-accelerated world, using our current over-valued market as a springboard for exploring how we can continue to build homes for our families in such a maelstrom of economic uncertainty.

As an added bonus to this small treasure of a book, the editor has included a brief afterword written by Barry himself in 1981, as part of “Building with Words: Canadian Architects on Architecture.” Written almost at the same time that he was building Downs House II, much of his writing gives evidence of the communion he most certainly would have experienced building not just his, but several of the houses atop the rocky precipices of West and North Vancouver, speaking of the journey from the darkness of the forest to the lightness of the views to the sea. Prevalent in his writing is an underlying philosophy of the house alighting as gently on the site as possible, accompanied by the straightforwardness of the house’s materiality, acting as a weather register on the structure’s exterior, while providing for the creature comforts within.

Appointed a Member of the Order of Canada in 2015, Barry Downs’ work and legacy is and will remain an important part of our West Coast tradition in the Lower Mainland, having realized along with his long-time business partner Richard Archambault (with whom he founded DA Architects in 1969) some of Vancouver’s most notable works of architecture, including Canada Place and Library Square. But as there will perhaps never be as personal an expression of one’s work as one’s home, this SALA publication has here presented us with a glimpse of this personal expression, and one can only hope the value of which can be transferred to those who would treat the land in Metro Vancouver as a blanche carte for yet another monster home.

For more information on the Downs Home II, visit the ORO Editions website.