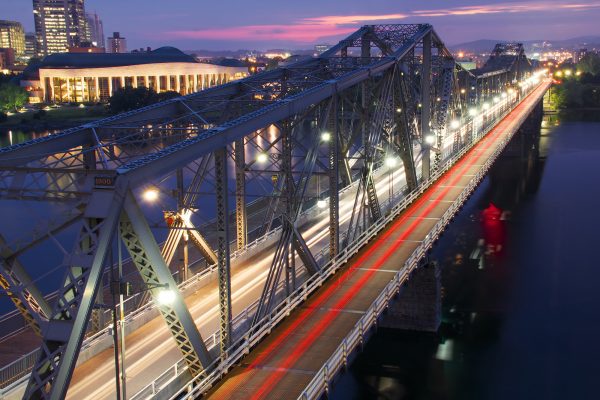 This week, Spacing is publishing three columns about the proposed $35 billion Canada Infrastructure Bank, which was proposed as part of the Liberal government’s omnibus budget bill and is currently being debated in the Senate (here are details of the recent manifestations of the bill).

About three years ago, the United Kingdom’s chancellor of the exchequer, George Osborne, made a great big deal about a scheme that, he promised, would see an injection of billions of pounds of capital from institutional investors and pension plans into the country’s crumbling infrastructure.

The Pensions Infrastructure Plan (PIP) would attract contributions in the order of £20 billion over a decade, with the money earmarked for up to 500 infrastructure projects across Britain. As the Financial Times put it, PIP was to become Osborne’s “flagship scheme.”

By last year, however, it had become apparent that PIP had turned out to be a whole lot less than Osborne promised. The managers had had trouble raising even a £1 billion in almost three years, and have only completed a few relatively unimpressive deals.

Meanwhile, many of the really choice infrastructure assets – 82,000 km of natural gas pipelines, Heathrow, electricity grids, and High Speed 1 (a.k.a., the train service from London to Paris via the Chunnel) – had already been sold to international players from countries like China, Australia, and Qatar.

High Speed 1, as it happens, belongs to Ontario’s teachers and municipal workers, via their respective pension funds.

Analyzing why PIP has been such a disappointment, the FT earlier this spring observed that while huge institutional investors – pensions, insurance companies, sovereign funds and asset managers like Brookfield, Macquarie, BlackRock – are hungry for these mega-deals, “most prefer not to invest in the construction phase.”

The reason: they all want predictable revenues and rock-steady returns to fund either defined benefit plans or the dividend streams from companies whose shareholders are pension plans, insurance companies and sovereign funds mandated to finance national pension plans. If you’re trying to pitch them on anything involving cost overruns or construction delays, you may as well forget it.

These sorts of investors want the reno’d house, not the fixer-upper.

PIP isn’t quite like the Canada Infrastructure Bank (CIB), in that the U.K. government only created the “platform” in order to pool assets instead of topping up the fund as a kind of pot sweetener. Still, the story offers a bit of a parable on whether governments can actually play the role of matchmaker in this sphere.

The U.K.’s experience is relevant for another reason, which is that it is perhaps the most aggressive privatizer of any OECD nation. Regardless of partisan stripe, U.K. governments have been aggressively selling state-owned assets for decades, and there’s not much left on the candy store shelf.

As for the new assets, consider the so-called “super-sewer” – a £4.2 billion waste water system known as The Tideway that will serve London and the Thames estuary. It is not a public entity, but rather the property of Thames Water Utilities Ltd., a maze-like consortia of giant pension funds, asset managers and private holding companies; even the hapless PIP managed to get a piece of this action. (For the record, Canadian retirees in B.C., Alberta and Ontario will also be collecting tolls from this big British toilet.)

Asked about the super sewer last year, one U.K. official offered up a familiar gripe to the FT: “There is more money seeking investments than there are [projects] available.” (Other critics have questioned whether it is even necessary.)

In that light, the Canada Infrastructure Bank, with its much-hyped $35 billion appetizer, may not be solving the sorts of problems facing these huge funds.

They crave assets that come with minimal risk, and which will continue generating income long after all and sundry are dead.

Now, think about what the Government of Canada has to put in the store window. There are the international airports, and indeed we’d all be fools if we didn’t think that Pearson International isn’t the big prize in this whole exercise. (All the Liberal-inflected chit-chat about transforming Pearson into a multi-modal transportation mega-something is surely aimed, in part, at international investors.)

Then, we’ve got the St. Lawrence Seaway, Via Rail, some of the larger salt-water container ports, bits of the TransCanada. But none of these assets are knock out investments in terms of revenue generating potential.

Via doesn’t and never will make money. The St. Lawrence Seaway managed a $7 million profit on $70 million in 2015-2016 revenues – a decent rate of return, but small cheese compared to a utility or a pipeline, and hardly worth the effort for institutional investors who prefer deals at least two or three orders of magnitude larger. The story is more or less the same for the Port of Halifax.

Now come back to Pearson: its cash flow and size is definitely closer to the sort of deals these investors seek, but the airport itself barely turns a profit and – embarrassing detail! – Pearson’s liabilities exceed its assets by almost $600 million. It will need something else to attract investors.

Rather than just finding private owners for national crown corporations or authorities, it seems the feds want the CIB to curate stratified multi-player deals featuring tranches of different types of construction financing plus project equity — a kind of potluck dinner of capital provided by the feds, the provinces, municipalities and private investors.

Anyone familiar with commercial development financing knows that these arrangements are highly involved, and consist of syndicates of various species of investors providing first and second mortgages, construction loans, and equity stakes that have varying degrees of patience (some shareholders want to exit in the short or medium term; others simply never sell). These instruments all come with their own yields and target rates of return, and that’s just for an$150 million office building.

The complexity of putting together these kinds of financial syndicates surely grows exponentially with the size of the investment. In that kind of environment, it’s not difficult to imagine, as both Mariana Valverde and Matti Siemiatycki have warned in this space this week, that infrastructure savvy investment bankers will understand how to apportion the most lucrative tranches to private interests and leave governments (i.e., us) with the messy and costly business of mopping up project risk.

Just think of the $5 billion in transit promised as part of the CIB initiative. There is not a single profitable transit operation in Canada; GO’s busiest commuter lines come closest, but even those recover only 80% or so from fares. Unlike London or busy commuter rail corridors in Europe, the population density simply isn’t sufficient to make most Canadian transit routes as profitable as a revenue-generating infrastructure play such as a utility.

For the CIB to entice private capital to supply either debt or equity to these kinds of deals, its officials will have to look very clinically at the proposed projects and sell off the portions that are sufficiently lucrative to satisfy institutional investors. That means the public partners must absorb that much more cost and risk.

What I’d prefer is to see the federal Liberals do the advance analytical work of deciding if they want to sell assets, and then engage Canadians in an open debate about privatizing these public entities.

Perhaps there is an argument for privatization: after all, does anyone still bemoan the privatization of Petro Canada, Air Canada, CN? No.

Should we sell our airports and container ports? Or should the feds use the national government’s fiscal muscle to cause provinces and municipalities to get out of the business of building highways, trunk sewers, or even flood protection berms?

It’s possible; I don’t know. But it seems to me that the CIB, as proposed, serves to shroud those tough discussions in a cloud of financial opacity.

So: Ignore the government’s sunny promises about how these theoretical billions will be invested; the U.K. experience with PIP shows it’s impossible to predict.

Rather, ask yourself if you truly understand what the CIB aspires to do. The fact that a clear explanation has been so stubbornly elusive isn’t a comms problem; it’s the essential problem, and one that should tell Canadians to approach this thing with caution.

John Lorinc is the senior editor of Spacing and writes regularly on urban issues for The Globe and Mail and The Walrus. You call follow him on Twitter at @johnlorinc