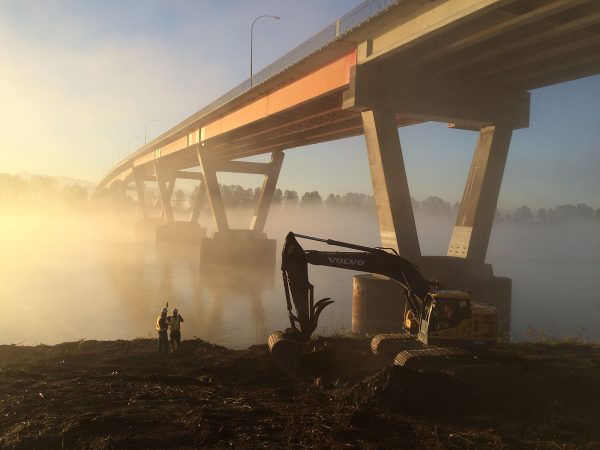 This week, Spacing is publishing three columns about the proposed $35 billion Canada Infrastructure Bank, which was proposed as part of the Liberal government’s omnibus budget bill and is currently being debated in the Senate (here are details of the recent manifestations of the bill).

Amidst recent discussion about the need to close Canada’s gaping infrastructure deficit, the old idea of creating a national infrastructure bank has risen to the top of the policy agenda. While there are some potentially constructive benefits to such a bank, the key policy challenge will be to avoid a situation where benefits are privatized and the public interest is not fully served.

Proposals to form a national infrastructure bank have been kicking around public policy circles for years.

During the 2015 federal election, the Liberal party promised to create a Canadian Infrastructure Bank that would provide loan guarantees and small financial contributions to municipalities and provinces. The stated policy goal was to make government infrastructure investments more affordable by lowering borrowing costs and providing access to capital.

Since the election, the Canadian Infrastructure Bank (CIB) has taken on new life as a key cornerstone of the Liberal government’s infrastructure investment strategy.  Yet the mandate for the institution has evolved considerably from its original intent.

In particular, the guiding purpose of the CIB is now to attract private investment into Canadian infrastructure projects, and in particular projects that are revenue-generating through user fees. The proposed infrastructure bank will be seeded with up to $35 billion in public money. This money will be invested in projects that are intended to leverage some four times as much in private sector financing from large institutional investors.  The government’s stated rationale now is to attract billions of dollars of private investment in infrastructure like toll-roads, transit, water treatment plants and energy grids, which is additional to planned public spending.

This model takes private sector involvement in infrastructure beyond public-private partnerships that are common in Canada, and into territory that is more akin to privatization with the private sector taking ownership stakes in infrastructure projects. And yet reflections on the outline of the current plan suggest that there may be less public benefit than meets the eye.

There are four key reasons why the current proposal could fall short:

Given these limitations, what might be a constructive purpose for an infrastructure bank tasked with attracting private investment? While the benefit of the infrastructure bank may be limited for conventional infrastructure projects, there is a clear advantage in having a national institution that can promote and invest in truly innovative public-private infrastructure projects of national significance. These are very large and long-term in scale, and would include multiple public and private partners, generate revenues from various sources, and are high risk and high reward for all of the stakeholders involved.

As the federal government proceeds with its plans to attract institutional investors to the Canadian infrastructure sector, a stronger case is required for the societal benefits of the projects that will be supported with public investment through the Canadian Infrastructure Bank.

Indeed, what has been lacking in the current discussion about the CIB’s formation is a focus on the community demand for, and benefits of, the resulting infrastructure projects. To date, the infrastructure bank has been presented largely as a financial institution, with a mandate to attract Canadian and global investors to an asset class that can be bought and sold.

But infrastructure is not only a financial product that generates profit. It is the foundation for successful communities — the necessary building blocks for economic prosperity, environmental sustainability, resilience, and social inclusion. As the response to the major rail viaduct proposed for the Junction area shows, people care deeply about what infrastructure gets built in their communities, and they want a say in the priority setting and decision-making process.

As such, it will be critical that there are transparent, evidence-based processes to ensure that the infrastructure bank is investing in worthwhile projects. Simply because a project can attract significant private sector investment does not mean that it is in the public interest or should be delivered through a private sector led project delivery model. The bank must serve as a centre of excellence for infrastructure project evaluation, delivery and data collection on project performance, tasks that are included in the proposed legislation to create the Infrastructure Bank but are ill defined at the moment. And the board of directors and senior management require expertise beyond banking and deal making to include community building and civic engagement.

In order to succeed, Ottawa must create an institution that is more than a bank, but rather a Canadian infrastructure investment agency that has the capacity to pick projects of national significance and effectively protect the public interest.

Matti Siemiatycki is an associate professor in the University of Toronto’s department of geography and planning. He specializes in infrastructure issues and testified before the Senate committee reviewing the proposed CIB legislation earlier this month.