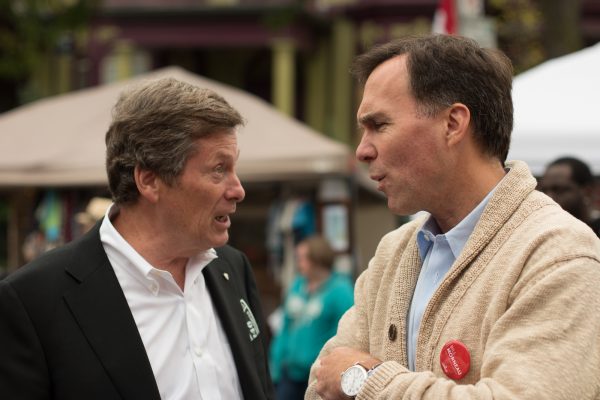 This week, Spacing is publishing three columns about the proposed $35 billion Canada Infrastructure Bank, which was proposed as part of the Liberal government’s omnibus budget bill and was debated in the Senate (here are details of the recent manifestations of the bill).

The federal government has posted a job ad for a CEO for the recently announced “Canada Infrastructure Bank.” In the House of Commons, the Liberals shoved the proposal for this new agency into an omnibus bill, Stephen Harper-style. But the Senate, flapping its new independent wings, wants to scrutinize the proposal separately. Of course the Senate is highly unlikely to turn down the proposal, but the Red Chamber may slow it down and call government officials in to answer questions.

Senators should consider the evidence collected by independent experts, who have shown that although public-private partnerships (P3s) may well deliver projects ‘on time and on budget,’ the public interest is not well served. As U.S. P3 expert Ellen Dannin showed in a recent study, when private investors are involved up front, they choose projects that are profitable — which are not necessarily the projects the public most needs. And, worse, as project agreements are drawn up, global financial actors who have far better legal help than local and state governments are usually able to impose conditions — such as guaranteed rates of return — that can create huge financial problems for the ‘public’ part of the the P3 partnership.

When does the tail begin to wag the dog? When do governments begin to treat the quest for financing as an end in itself, rather than as the means to achieve goals that have been defined and prioritized through public input and evidence?

Infrastructure Canada specifies that this new agency (which is not actually a bank) will only facilitate “revenue-generating” projects. So, anything that is completely free to the public is excluded from the start. But it’s not at all clear what kind of project will be considered. Public transit has a revenue stream, and so does public housing (tenants pay rent). But these assets always require major subsidies, which in Canada (unlike in Europe) are provided primarily by local governments; it’s hard to imagine that municipalities would support federally initiated P3s that committed them, not Ottawa, to continuing subsidies and heavy operating costs.

Perhaps ‘revenue-generating’ really means ‘profit-generating’. Tolled roads and bridges can be revenue, and even profit-generating, and that may be what Ottawa has in mind for the Infrastructure “Bank”—  although Tudeau’s spinmasters would tell him putting his cute picture on top of each toll would not do much for his “sunny ways” persona.

Whatever type of project is chosen, what would the CIB add to the existing mechanisms for attracting private capital to Canadian P3 projects? The backgrounder notes that as it seeks investment, this new non-bank will be careful to avoid “crowding-in” (their word) on the capital flows that have, for over a decade, privately financed large provincial projects, especially in Ontario and B.C. The weird term “crowding-in” appears to be a nod to the financial press as well as P3 promoters such as KPMG, who constantly complain that there are billions of dollars, both global and Canadian, seeking safe and uncontroversial investments, but not enough large Canadian P3 projects in which to invest.

One of the reasons why major players like the Australian infrastructure mega-fund Macquarie like working with agencies such as Infrastructure Ontario (IO) and Partnerships BC is that they standardize the bid process and constantly expand the number of new projects. That kind of certainty makes financiers happy.

The proposed infrastructure bank will adopt this same kind of deference to the needs and timelines of private capital. As federal documents make clear, the new entity will provide a “pipeline of projects” for global investors. The pipeline metaphor may rankle in B.C., but it says a lot about how these folks (including at agencies like IO) think about prioritizing projects and ensuring infrastructure is created where it’s most urgently needed.

If the new federal agency were a policy shop capable of conducting needs assessments and coming up with criteria for prioritizing projects (other than whether they appeal to finance capital), then it would be doing something useful that the current Canadian P3 industry is totally neglecting. That’s a direction that the Senate could encourage.

But it’s not what Liberal finance minister Bill Morneau has been talking about.

At the same time as he’s advocating a “pipeline of projects” instead of a system that promotes well chosen, locally responsive, and innovative undertakings, Morneau has sought to reassure provincial P3 agencies that he won’t be coming between them and their favourite lenders. A much-tweeted photo of Trudeau and Morneau meeting, in person, with representatives of the global financial giant BlackRock, in the lead-up to the Infrastructure Bank announcement, tells the story: BlackRock, the world’s largest asset manager, has not been a player in provincially organized infrastructure deals.

The essence of P3s is that the project needs to be attractive to the private sector lenders — banks, hedge funds, pension funds, etc. — or else it won’t happen. Financial feasibility is sometimes provided by means of heavy government subsidies that extend into the indefinite future (when provincial governments want to build infrastructure using P3 methods, but don’t want to create new user fees and tolls). Yet, if Ottawa wants to avoid creating huge new long-term liabilities for either itself or other governments, and consider only profit-making P3 projects, then the priorities and needs of BlackRock and other global investors will dictate what projects are actually selected and how the P3 agreements will be structured.

Canada’s grave infrastructure needs are being used as bait to attract global investment — that much is clear from Ottawa’s use of the phrase “innovative financial tools.” But what will Canada be forced to offer in order to attract these footloose giants, which can, with the stroke of a pen, decide that a hydroelectric dam in China or Africa is a better investment than an affordable transit line in York Region, not to mention basic infrastructure in First Nation communities?

Only time will tell if the shiny new infrastructure agency will end up doing much of anything. The Harper government set up “Public-Private Partnerships Canada” with much fanfare, but this agency carried out very few projects, for good reason: provinces and municipalities, which currently own, finance, and manage the overwhelming majority of the country’s infrastructure (including water systems, hospitals, schools, and universities, not just roads and bridges) are the key players in Canada’s infrastructure game. Calling the new federal agency a ‘bank’ is unlikely to fool powerful premiers, transit authorities and infrastructure agencies.

Not since the St. Lawrence Seaway has the federal government taken an active role in planning major infrastructure projects with profound economic and geographic impacts. Since the 1960s, federal governments of all stripes have simply contributed additional funds to projects that lower levels of government have initiated, picking and choosing, often for political reasons, but selecting from a menu that they themselves did not write. Provincial and municipal autonomy over infrastructure investment has overall increased rather than decreased over time. There is no way that Morneau could emulate FDR’s New Deal even if that is what he wanted, which is doubtful.

If the federal infrastructure Bank fails to get off the ground, or ends up doing only a small number of projects (as Public-Private Partnerships Canada did during the Harper era), Canadians should be thankful that global financial players like BlackRock won’t end up with decision-making power over what used to be called “public works” — which are still, in this country, largely public.

Marianna Valverde is a professor of socio-legal studies at the University of Toronto, specializing in urban issues. Follow her on Twitter @mvalverdeurban.