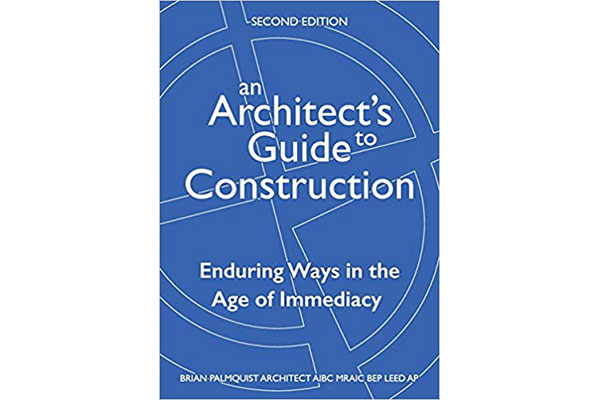 Much has changed in design and construction since the first edition of an Architect’s Guide to Construction was published in 2015. The computer technology supporting design and construction continues to improve at a rapid pace. There is greater emphasis on the environment than ever before. The march to globalization has accelerated. The procurement of construction at larger scales has embraced new approaches like the Integrated Design Process (IDP) and Public-Private Partnerships (P3). There is a proliferation of apps, applications and cloud storage now available to support real-time communication and information exchange.

From the Introduction to the Second Edition

The profession of architecture is an occupation that can be difficult to translate to the non-architect/builder mindset. One must be more or less immersed in it to fully appreciate the details that go into the architect’s daily work. In this new book by well-known Vancouver architect and educator Brian Palmquist, we are reminded that much of our current professional framework for doing our job has gone through some major changes over the years.

And while this book could appeal to those curious about what we actually do for a living—we’re not just drawing lines at our drafting boards all day— it is mostly intended for architecture students and interns: providing a strong study resource for the latter as they prepare for both their final accreditation exams and oral reviews. Palmquist here includes many details that are hard to glean from a single study guide (even Canadian Handbook of Practice, or CHoP), with the book including comprehensive descriptions of payment certification, construction bonds, and letters of assurance, and that’s just for starters.

As a long-time contributor to the continuing education programs for both the Architectural Institute of British Columbia (AIBC) and Royal Architectural Institute of Canada (RAIC), he is also a practicing architect, code consultant and building envelope professional. More recently, he joined the editorial advisory board for the Canadian Handbook of Practice, or CHoP, which is about to launch a new and updated edition.

With Palmquist’s book, we are all the beneficiaries of his forty-plus years of experience in construction administration—what he calls the trenches—including numerous tales of litigation and negotiations. Divided into four sections, the book starts with what he calls the two primary objectives of the professional architect, risk management and compliance with local building codes and zoning.

This is then followed by chapters on what he calls the profession’s two fundamental activities—signing contracts and working with clients/consultants. The third section fills out the remainder of the book, comprised of eleven elements that are the purview of an architect during construction administration, including sections on specifications, submittals, mockups, and site reviews.

With half the book quite technical, the other half is a series of fascinating anecdotes, drawing upon Palmquist’s career as an architect and code consultant, working in various jurisdictions in both BC and Alberta. Vancouver architects will especially appreciate the local case studies, starting off with a bang with the infamous Wall Centre glass controversy in downtown Vancouver. The point of this story is to drive home the importance of documenting all facets of the construction process, including holding on to approved material samples, which was the case with the Wall tower where the glass sample went mysteriously missing.

Two even more dire and consequential incidents start off the book, one which occurred at the grand opening of a Save-On-Foods in Burnaby, BC in 1988, and the other more recently at the Algo Centre Mall in Elliot Lake, Ontario in 2012. Both involve structures collapsing—in the latter case with human fatalities—where improper detailing and coordination of construction documents contributed in both instances to the structure’s failure.

While I had heard the story about the Save-On-Foods in my structures class in architecture school, I did not realize until I read Palmquist’s book that the direct result of that event in Burnaby in 1988—where a rooftop parking garage collapsed into the mostly empty grocery store—set the wheels in motion for the establishment of the letters of assurance in the BC building code (and later, Alberta building code as well). And given the more recent tragedy in Elliot Lake, the Province of Ontario might be wise to adopt them as well.

In BC, architects had to ‘weather’ the leaky condo crisis of twenty years back, a state of affairs Palmquist would’ve known all too well. This prompted him to become a building envelope professional (BEP) along with being LEED-certified. With this second edition comprised of much of the content of courses he continues to teach, he points out that now, in this age of immediacy, is it paramount to pass on his knowledge to the next generation. As his generation continues to retire, there is currently a brain drain going on in the profession, especially in regards to construction administration, so Palmquist’s tone is understandably an urgent one.

But his humility is also very apparent throughout. As he says early on in his book, this is not ‘the’ architect’s guide to construction, it is simply ‘an’ architect’s guide. Still, the breadth of his experience makes the sixty case studies (culled down from seventy in the first edition) invaluable lessons of his own journey through construction administration. In one epic case study, he worked with a builder who went bankrupt during the job, necessitating the use of both the builder and performance bonds to finish the job.

As Palmquist rightly points out throughout the book, architects are the prime consultants—the professionals operating in the real-time of this new age of immediacy (which is also a very litigious time). And as architects, in addition to being perpetually liable for our work, we have the opportunity to interact with our built environments in three meaningful ways:

And while Palmquist compares architecture and construction to medicine in the book’s introduction, I would say literature also has some allegories to offer. If we were then to compare the trials and tribulations of architecture to Dante’s Divine Comedy, Palmquist is our guide, our Virgil, and we are all the benefactors for his writing all this detail down for us, with this new edition of An Architect’s Guide to Construction now culled down to manageable size, making it both a handy study companion for the intern as well as a quick reference guide for the seasoned architect.

To get an electronic or paper copy of the book, go to amazon.