In Italy, most architects know this book and have drawn on the contents in its pages first during their university studies and later as professionals. The tree drawings appear in countless proposals and plan drawings, and today they have become part of the vector graphics of major computer design tools.

Our goal is to spread the word about this admirable work – a product of ingenuity, craft, a thirst for knowledge, and critical thought. Today, more than thirty-five years after that first edition, those values stand shoulder to shoulder to defend the dignity of trees and their right to exist autonomously in an appropriate setting, as well as offering a response to their use in architecture for purely aesthetic reasons.

− From the book’s Introduction

With accolades and praise from such diverse voices as the Council on Botanical and Horticultural Libraries, Popular Science, and the Wall Street Journal, this new six-and-a-half pound tome is a wonder to behold, and a magnificent reference for architects and landscape architects alike. Much as Gray’s Anatomy is to the medical world, this atlas of all things filled with chlorophyll contains over two hundred tree specimens, represented in 550 hand drawn ink plates, remarkably with deciduous trees represented twice to depict them with and without their foliage.

A labour of love for the book’s authors, Cesare Leonardi and Franca Stagi opened their design firm together in Modena in 1963, spending the first part of their career designing furniture, including the now famous Dondolo and Nastro chairs. In the 70’s and 80’s, they turned to architecture and landscape design, in the process beginning their lifelong passion of drawing the trees in the book, traveling throughout Europe and later Central America to photograph the trees upon which the drawings were based.

With interns in their offices joining in on the enterprise over the years, by 1982 the firm had produced enough material to launch an exhibition of the plates in Emilio Reggio and Modena, all painstakingly drawn in ink at 1:100 scale. As the catalogue for that initial showing, until now the only edition was known as L’Architettura degli Alberi, with this new edition making it available for the first time in English. Also in this updated edition are several new essays on Leonardi and Stagi’s marvelous achievement, including commentary on the impact their work has had on landscape designers and architects the world over for the past three-and-a-half decades.

Also reproduced here, as it was in the original edition, is a bookmark which doubles as a 1:100 scale ruler, a reminder that the book is not just an encyclopedia, but is as well a reference tool for the designer in the field. Along with giving such details as each tree’s height and trunk diameter, there is also a section devoted to a given tree’s changing leaf colour, along with the shading of its tree canopy at a particular time of year. New since the first edition, the book features CAD reproductions of what were originally hand drawn shadow studies, careful observations by the book’s authors of the interplay of shadows between trees as they are grown in proximity to each other. 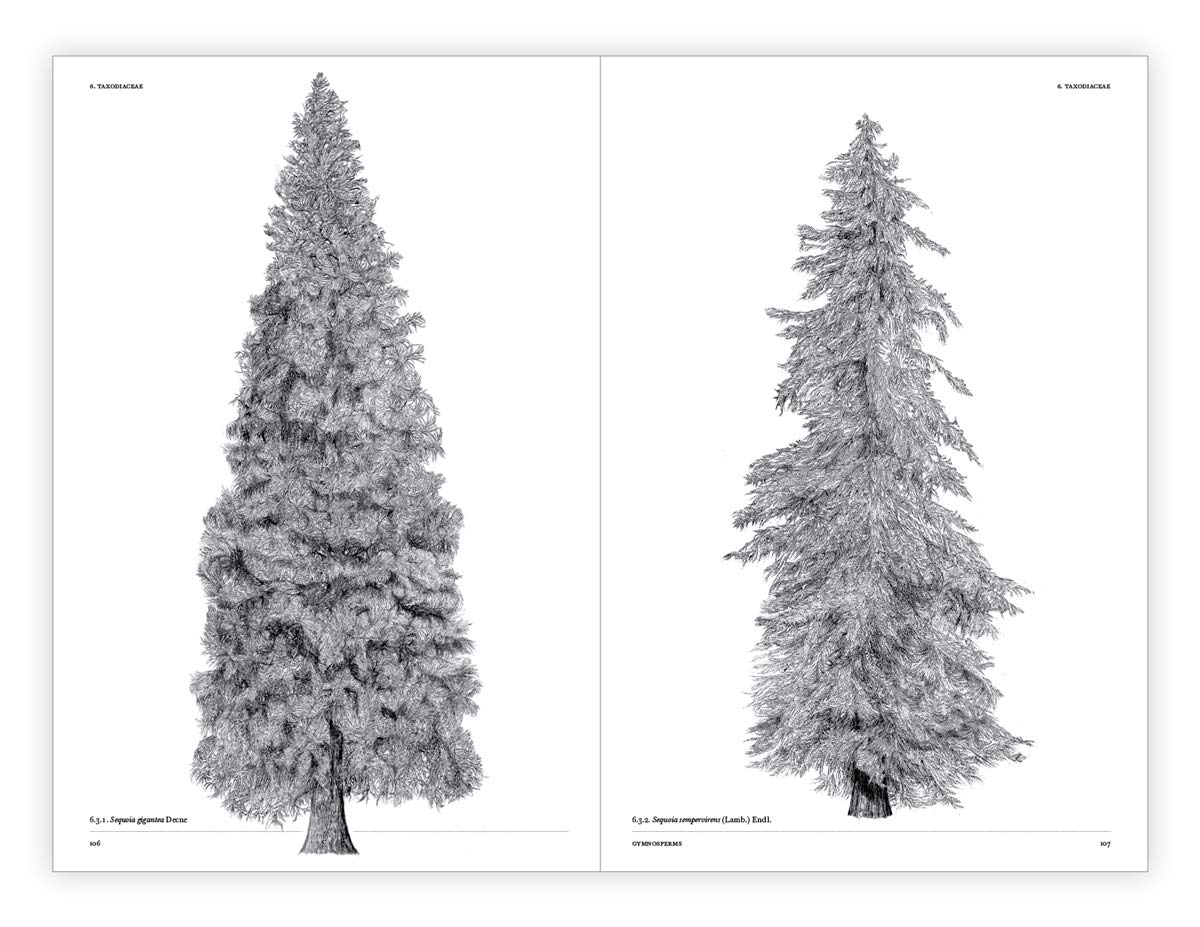 Perhaps the most wonderful achievement of the book is how its size has been determined by the size of the largest trees in the book, i.e. the sequoias. Drawn at 1:100, the trees featured in the book scale to 110’ tall (though giant versions have been known to grow closer to 300’), nicely fitting in the oversized books dimension of 15” x 10”, and occurring roughly in the centre of the book to allow other coniferous, deciduous, and cacti to ascend and descend on each side of these mighty giants.

New essays by the book’s editors are here featured alongside the original exhibition’s companion essay by Stagi herself, entitled The City, Green Space, and the Architecture of Trees, in which she reminds the reader of the importance of the careful placement of a tree in an architectural plan, pointing out how it is the particular tree that ultimately decides where it will flourish and where it will not.

Translated into English, the Italian architect’s description of the green spaces in our cities reads as sheer poetry:

“In the empty spaces in between, the places that have been left without buildings, we can admire our own absence. In these rare areas that have not been made into construction sites, in these scraps of land that are often derelict, these surviving fields, we can hear other sounds, smell other odors and fragrances, observe other shapes. We can measure the passage of time and perceive the shifting light. These are spaces where footsteps fall softly on grass and land damp from rain. These are places where the colours of the land and the seasons can still be viewed, and where the wind blows over fields and through the air without meeting obstacles. In these places, the light of fireflies and the rustling of leaves wait to be discovered, and the path of the sun is traced by trees that stand on the grass like sundials.”

In total, the book illustrates an astonishing 212 tree species (and 24 varieties) that belong to 128 genera and 53 families, with each exquisite black and white illustration a considerate study of our natural world, making it an indispensable design tool for architects and landscape architects, botanists and arbourists alike. A wonder to behold, this new edition is a reference book you are sure to return to again and again.

For more information on The Architecture of Trees, go to the Princeton Architectural Press website.